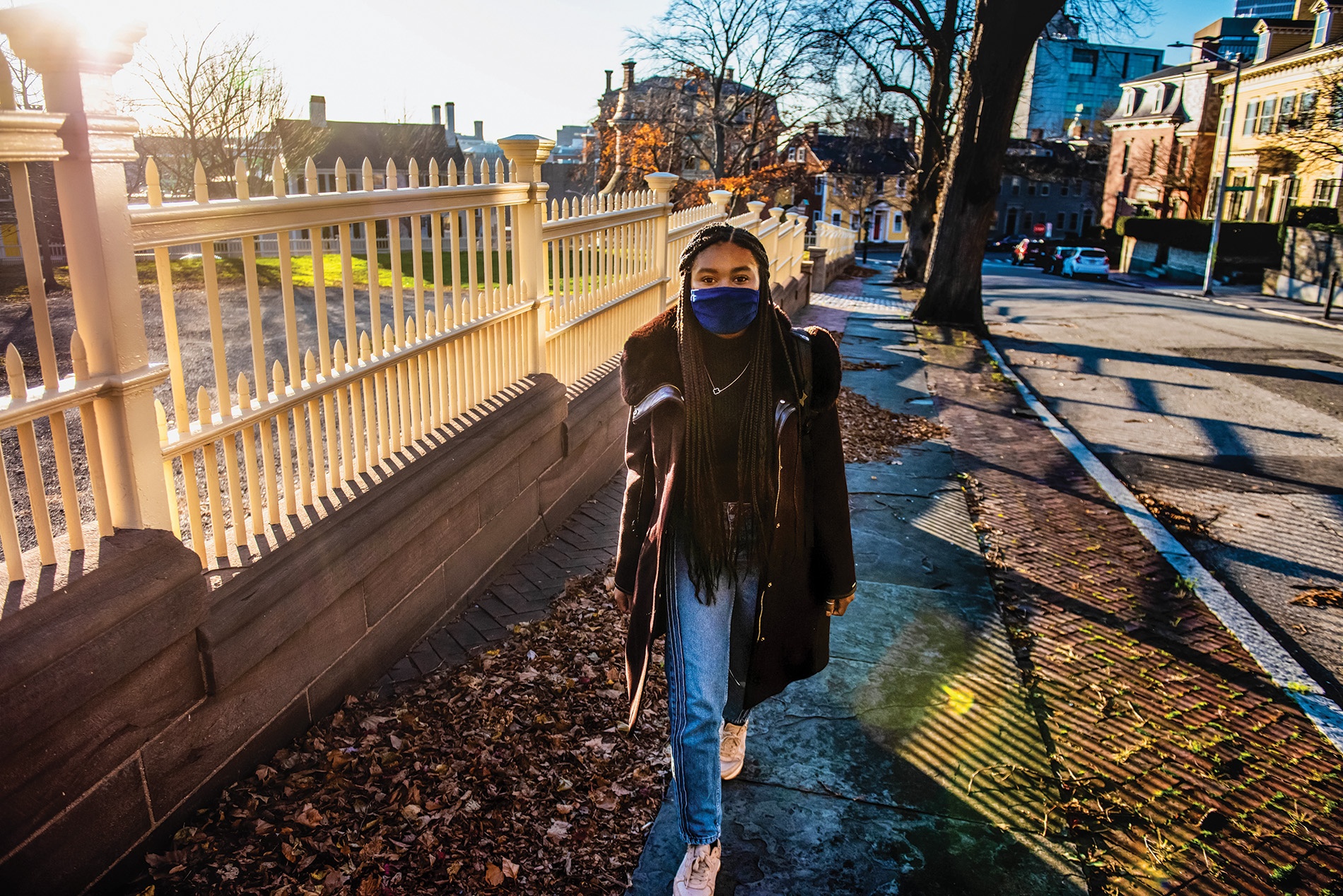 Kimberly Collins ’22 is the only person in sight this sunny December day on College Hill.Photo: David DelPoio
Student Life

Friday night at Brown when I was an undergrad usually included a host of plans: an a cappella concert under Wayland Arch, dinner with friends on Thayer Street, and a classmate’s birthday party on Wriston Quad. But those traditions are on hold right now.

Pandemic weekends are still taking some getting used to, says Kimberly Collins ’22, a public policy and Africana studies concentrator from New York. “People are largely tapped out and keeping to themselves. My friend group will sometimes hop on Zoom, grab dinner, or watch a movie.” Dinner comes prepackaged from the dining halls, available for pickup in environmentally friendly, reusable bags.

This fall, Collins moved into an on-campus suite with two friends, and after a mandatory two week quarantine she began acclimating to her new normal on College Hill: online learning and masked walks. The biweekly trips to the Olney-

Margolies Athletic Center for testing—students swab their noses themselves, and drop their containers off at a desk—are now the surreal equivalent of returning a book at the Rock.

The quiet on College Hill feels weird, she says. “It’s a good thing because of COVID, but it can also feel a little scary and instill fear of being out late at night.” Without groups of students scattered across Thayer Street or flocking to and from parties, Collins has felt unsafe walking home alone. 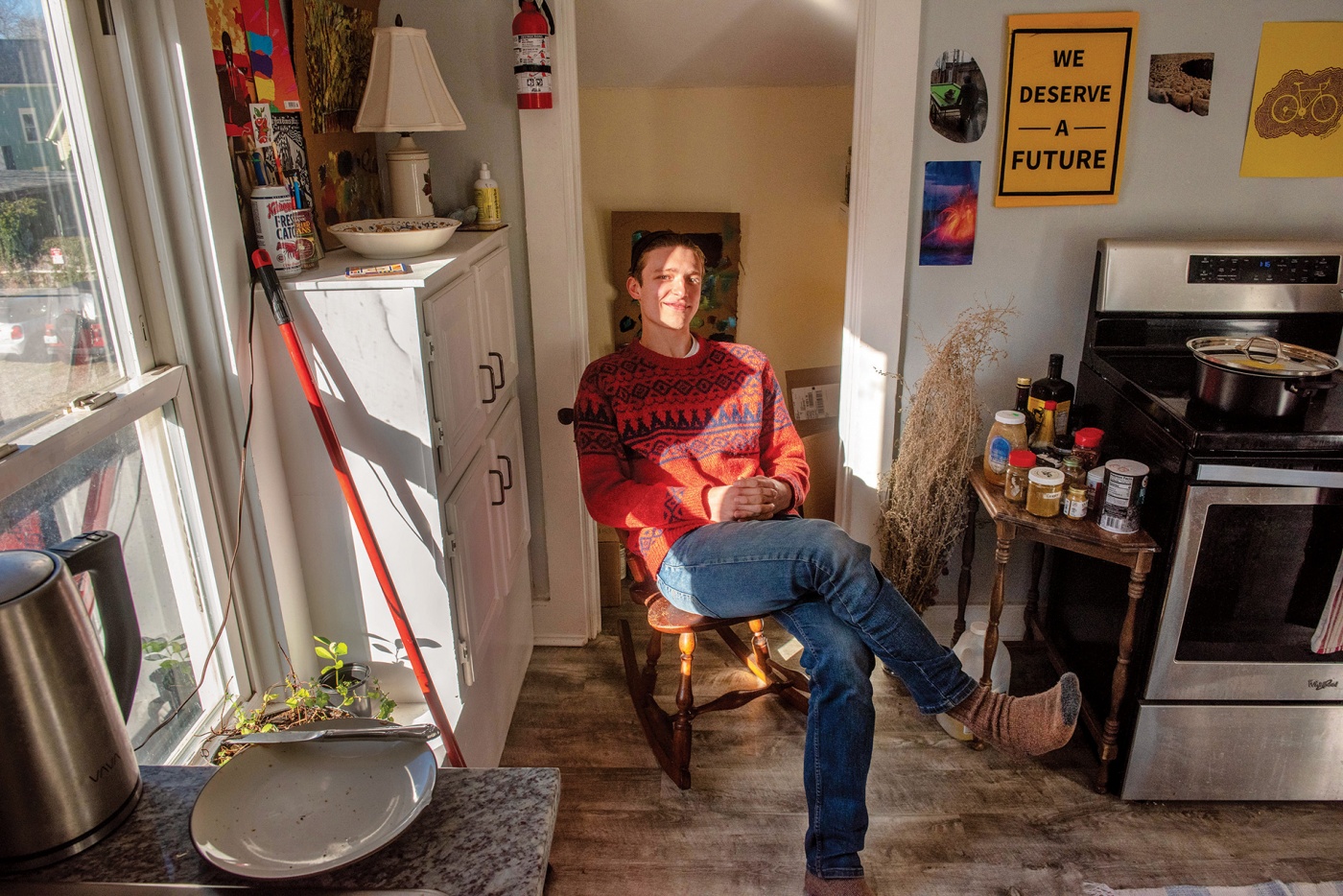 BAM intern Peder Schaefer ’22.5 and his two off-campus housemates have been relying on new rituals like cooking meals—a lot of curry, rice and beans, and pasta—and sitting down for dinners together. “My friend has gotten into cooking pies which is pretty fun. Brown was giving out pumpkins around Halloween and we’ve made a few pumpkin pies from that.” When temperatures were warmer, Schaefer and his housemates also hosted small outdoor gatherings with 4 or 5 friends. “We drank out of straws so nobody had to take their masks down,” he recalls.

These small doses of normalcy have been helpful in breaking up the monotony of Zoom and hours of screen time, he says. “Honestly, when you don’t have the cathartic releases of parties on the weekend it does start to feel like one big blur.” Election night was particularly disorienting for Schaefer, who had been working hard on politics. “Frankly, at a time when people need each other, it can be frustrating to not have more people around.”

Despite the solitary nature of this semester, Schaefer is trying to prioritize his connections through walks and socially distant picnic lunches. “The wonderful part of going to college at a place like Brown is you can meet people from literally anywhere. There’s still a desire to maintain that.”

Owen Fahey ’23 had his freshman year cut short last March due to COVID. “It was awful being sent home just as I was finally making more friends and getting comfortable on campus.” The public health concentrator returned in mid-September, forming a pod with a few fellow sophomores. “We only really hang out with each other.”

New romantic relationships on College Hill are also few and far between. While a few hookups were happening at the start of the semester (only after both parties had procured negative COVID tests), Fahey says students became increasingly wary as cases rose nationwide. In the absence of parties and in-person classes, students are using dating apps as meeting grounds and setting up virtual FaceTime dates rather than meeting in person.

Students were proud of how seriously their peers have been taking pandemic restrictions (other Rhode Island colleges saw serious fall spikes in cases). Still, as a nostalgic alum, it’s difficult to imagine College Hill temporarily closed for business. Luckily, one tradition remains: Chicken Finger Friday at the V-Dub—my favorite way to welcome the weekend at Brown—is still on. To go only, of course.