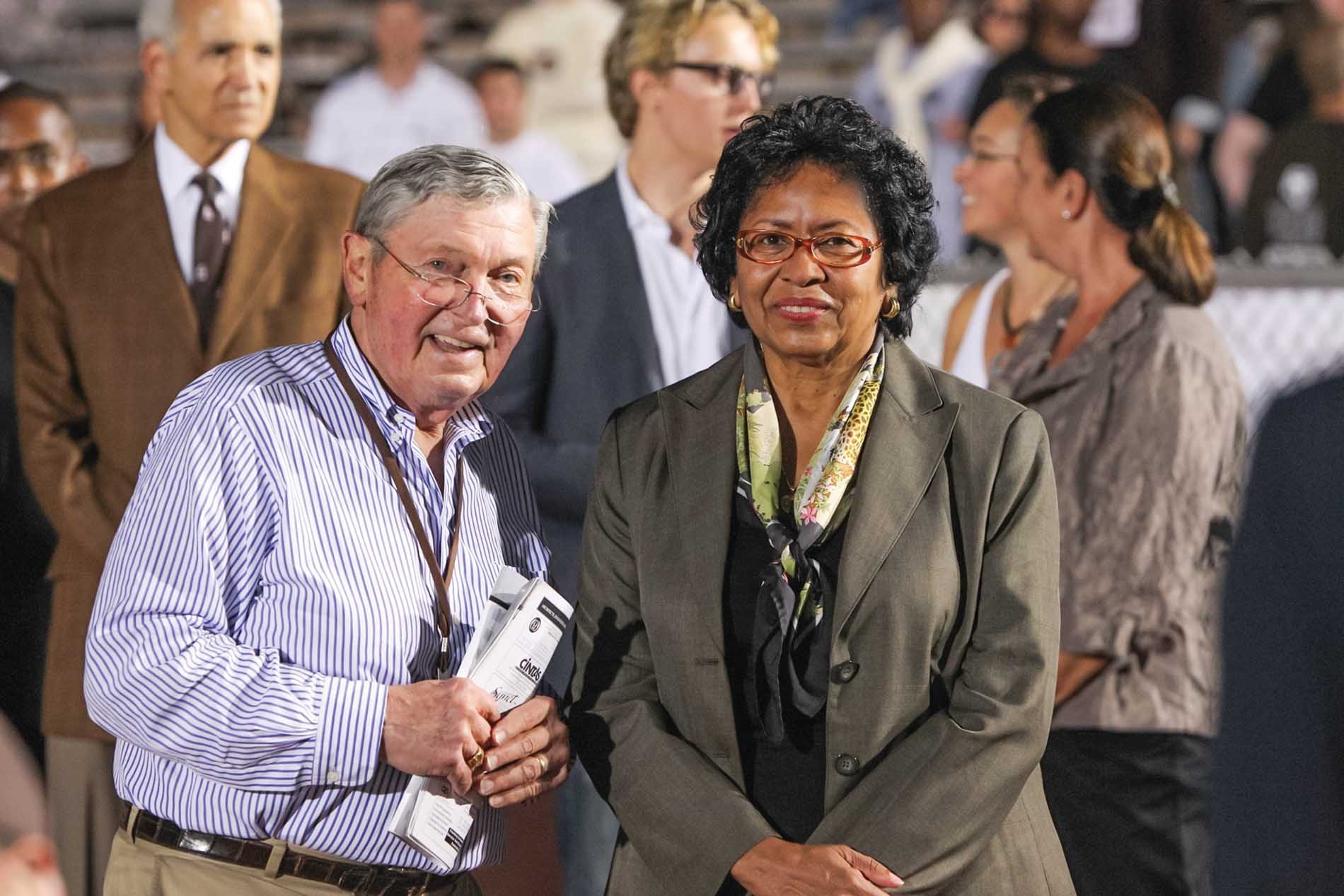 Ever True
Artemis A.W. Joukowsky ’55 was one of Brown’s biggest cheerleaders and fundraisers.

For decades at Brown sporting events, there was one man everyone knew­—from the players to the security personnel and faculty. At first he came as a student; an Americanized Russian immigrant enraptured by football. Later, as an alum, he drove his kids across New England on weekends in a VW bus, singing the Brown fight song and showing up in all weather, even for away games. And though wheelchair-bound in his final years, Artemis A.W. Joukowsky ’55—or “Artie” as his friends called him—remained ever true, still there
in the stands and on the sidelines, expressing with his presence the same devotion to Brown that propelled a lifetime of giving and engagement.

“Artie breathed Brown, breathed the Main Green, breathed Providence,” recalls former Chancellor Tom Tisch ’76. “With Artie you really felt the arc of history in the University. He basically knew and lived the story of Brown.”

The University trustee and chancellor emeritus may have passed away in December at 89, but Joukowsky’s philanthropic legacy permeates campus—in the trees he planted, the institutions he founded, and the now billions in endowment fundraising he helped seed.

Born in Shanghai to Russian noble lineage, his family brought him as a child to New York, where he attended the Lawrenceville School. Arriving at Brown, he became one of the first students to live on the newly created Wriston Quadrangle as a member of the Delta Phi fraternity.

“My father was curious, open-hearted, and approached every problem as an opportunity,” says his son Artemis Joukowsky III. “Brown was the perfect environment to grow that ethos of service.”

It was also the place where he met Martha Sharp ’58 when she appeared as one of the three witches at a Macbeth performance he attended his senior year. Enchanted, Joukowsky proposed one year later and the spell never broke. For decades, he kept his and Martha’s student ID cards displayed in his office.

“That smile that is in so many pictures is the smile he had every day when Mom walked into a room,” says their son Michael Joukowsky ’87. “He gave everything, his heart and soul, to Mom.”

After Brown, the Joukowskys spent nearly two decades living in Italy, Thailand, Hong Kong, and Lebanon—where he served as an executive for American International Group Incorporated (AIG) and she pursued her career in archaeology. But even after weeks on the road, he always made the trek out to Martha’s latest remote archaeological dig and spent time helping her. Once he retired from AIG in the late ’80s, he stayed at digs with Martha for months on end, taking photos and measuring objects and whatever else his wife needed him to do.

By the time the Joukowskys moved back to the United States in the late ’70s and reconnected to their alma mater, Brown was in a precarious financial position. As the new president Howard Swearer would say, “Brown does more with less; the only problem is we are running out of less….” The endowment was less than $100 million.

“Everything was going south,” recalls Richard Ballou ’66, who worked in the development office. “Our fundraising was really inadequate and we were in deep trouble...that’s when Artie appeared and set a new standard for what was expected from a volunteer.”

He gave generously and often, endowing professorships and scholarships and providing special support to Warren Alpert Medical School. And he wasn’t content simply to give money—he was eager to jump into whatever “trench work” was needed, telling development staff to treat him as a coworker. He arrived early and left long after dark, becoming “the volunteer in residence,” says Ballou. With his track record of giving and his hands-on approach, he convinced other alumni to get involved, playing a major role in campaigns that generated hundreds of millions and helping set the foundation for Brown’s current endowment of $4.7 billion.

“When Artie twisted your arm, it never hurt—but you always said yes because he had a way about him and his heart was in the right place,” says his close friend Jon Land ’79.

He convinced Land to help him publish a comprehensive history of Brown football—an endeavor that took three years—and later produced a book on Brown crew.

“It was important to Artie that every single race, every single person who rowed on the team made it into the book,” explains Marcia Hooper ’77, a former rower and coauthor. “He wanted to make sure each person who made a contribution was recorded.”

He cofounded the Brown Sports Foundation, an innovative organization that generated funding for University athletics by reaching out to alumni athletes.

Another of his visions still shaping campus life is the Public Art Committee, which he founded in the mid-’80s alongside Visual Art Professor Richard Fishman. As the committee became more formalized, a percentage of the budget for each constructed building was set aside to commission or host new contemporary art pieces, paving the way for the iconic Untitled Bear/Lamp (a.k.a. “Blueno”).

“What was wonderful to see over the decades since Artie founded the committee is how he began to look at art with the eye of a connoisseur and the mind of an adventurous spirit,” says Fishman. “He was a student, a lifelong student.”

The walls of the Joukowsky home on Prospect Street were covered in artifacts from their travels and Martha’s digs, and he could tell you the story behind each in languages that included Italian and Russian.

“When you went into their home, you really felt that you were sincerely welcomed—that can’t be faked,” remembers Stephen Roberts ’62 of the Joukowsky residence, where he stayed for weeks as a new University chancellor. “The warmth and security made you comfortable and at ease.”

In the nascent days of Brown’s archaeology department, where Martha taught for 20 years, the Joukow-sky home even included a classroom in its basement. Her students were able to move out following the 2004 creation of the Joukowsky Institute, a beautiful archaeology center that remains one of the most visible of the couple’s contributions.

Yet Artemis Joukowsky’s legacy lies also in the mark he left on all those he loved. His family numbered not just his wife, three children, and eight grandchildren, but all who were part of Brown. His legacy lives in the way those who knew Artie treated him, like football coach Phil Estes, who sat with him for full days of chemo treatment, and the friends who helped bring him to and from games in his wheelchair.

Reader Responses to Ever True