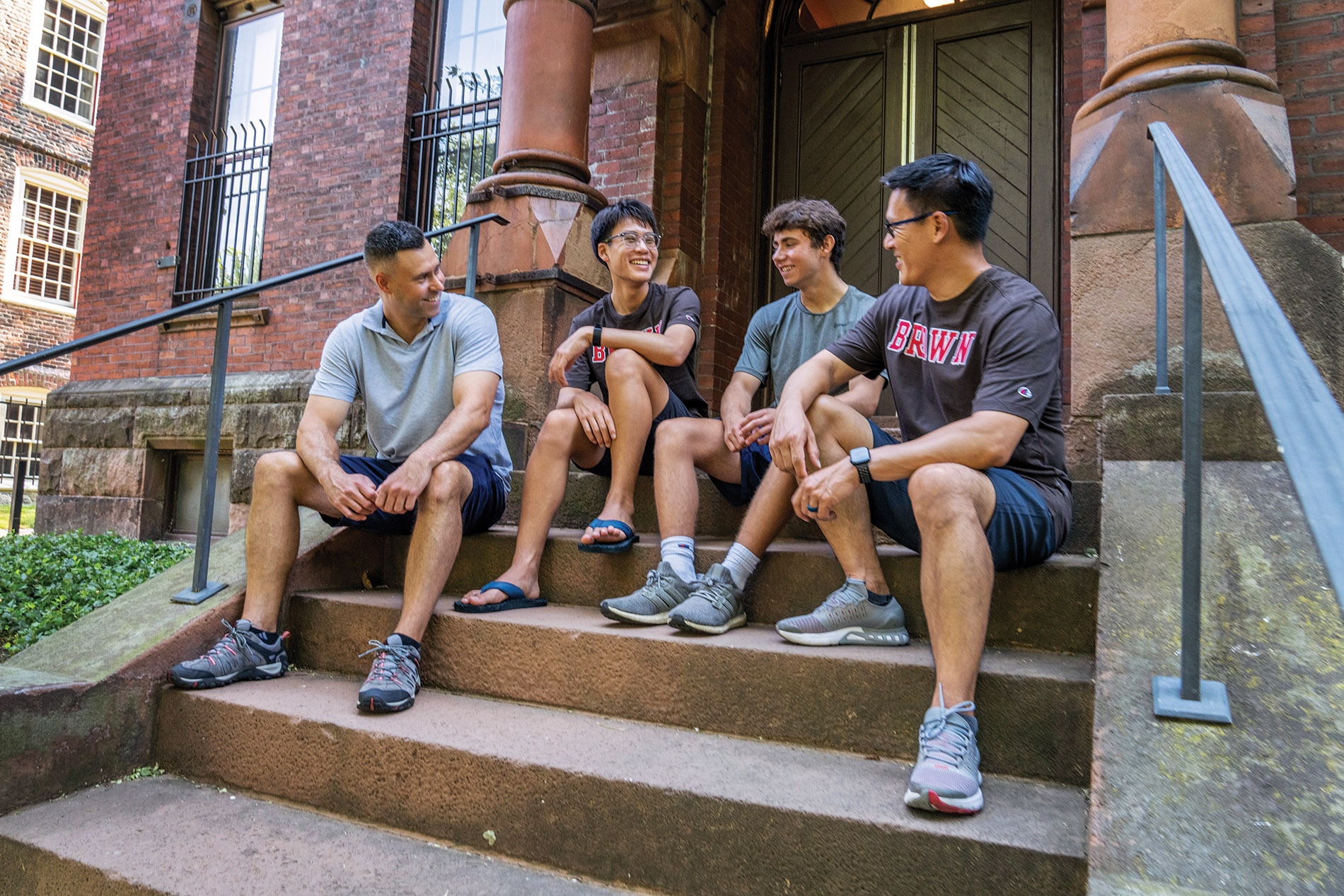 The squid was a disaster. “It was the inkiest, most undercooked, disgusting thing,” is how Fed recalls their friend Norm’s cooking fail. They were seniors then, living in an apartment on Hope Street, cooking for each other on the weeknights. “It was supposed to be his mom’s recipe,” Elbert muses. “We ate a piece, and then we were like, ‘Let’s just get a pizza.’”

It wasn’t all bad calamari, though. Federico Lago ’96 and Elbert Kuo ’96, MMS ’98, MD ’01, have shared lots of meals. The two were roommates freshman year, lived together until they graduated, are best friends still. Both recall buckets of time poured out at the Ratty like time was an endless resource.

“We spent a lot of time eating,” Kuo says. “We would get there at four and be there until seven. We’d stay through two sets of people. And we would eat a lot. Fed took a nutrition class once, and they were supposed to log what they ate, and he ate so much—like, peanut butter on ice cream, that kind of thing—the professor didn’t even believe him.” Fed remembers it the same way: “We would sit down at the Ratty for hours. We would stay too long, talking and eating. We ate a lot.”

“Fed worked a lot in the kitchen, too,” Kuo recalls, and Lago says, “I’d be in the kitchen chopping up onions and scallions—” Kuo recalls that Lago wore his chem goggles for this “—I was sweaty, dirty, and I would walk into the medical imaging class we were taking and everyone would move over. The room would part like the Red Sea! And Elbert always sat next to me. No matter how bad I smelled.”

They’re in different states, talking to me at different times, but the echoes between them are almost uncanny. What’s the platonic equivalent of love at first sight? Because that’s what it was. They met freshman year at the TWTP (Third-World Transition Program), to which Kuo arrived late from a family vacation in Alaska. “I was walking somewhere on the Pembroke side of campus,” Lago recalls, “and someone said, ‘Hey, I just met your roommate Elbert! He’s right there!’ And Elbert is walking towards me and he says, ‘Federico!’ and I say, ‘Elbert!’ and he came right up to me and gave me a hug. He embraced me. And I embraced him back. I was like, ‘Oh, this is going to be a good roommate.’ And I was right.”

“We knew we were different,” Lago says. Kuo was coming from Lexington, Mass., with highly educated Taiwanese parents and an orientation toward achievement (AP classes, violin lessons); Lago from a working-class neighborhood in Middletown, Conn., with supportive parents who were immigrants from Uruguay—supportive and optimistic, but without much cultural knowledge about academic success in the U.S.

“The frat guys were nice guys, but it was a very loud, sloppy, broken-glass-y experience.”

Kuo arrived as a PLME student; Lago had “no idea” what he wanted to do. “But I immediately felt—I think it was mutual—we immediately felt comfortable with each other,” Lago says. It was mutual. Kuo says, “My initial impression was that we’d get along right off the bat.” They were fast friends—hanging out at the Ratty, the gym, their room, “the biggest room,” on the third floor of Hope College.

The friendship stayed constant, though their housing took a brief turn for the worse: They lived in Olney sophomore year, sandwiched between two fraternities. Kuo remembers “Naked beer slides down the hallway. Drunk people. It was a good bonding experience if not the best housing experience.”

“The frat guys were nice guys, but it was a very loud, sloppy, broken-glass-y experience,” is how Lago remembers it. Junior year they lived in Olney. And then it was the apartment on Hope Street, with three other friends and the variable cooking. “They saved my life,” Lago says suddenly, and then explains that his sister Karina, Brown ’95, was killed in an accident that year. “They were always there. That’s what I remember most about that year. I was never alone.” Kuo remembers this time, too. “He is a brother to me,” is how he sums it up.

After college, Kuo stayed at Brown for his MMS and MD degrees, while Lago left for dental school at the University of Connecticut in Farmington. But they stayed close. “We got married the same year, had kids the same year,” Kuo says. “We went to Sanibel together. We did a guys’ trip every year. You know, Vegas. Fed was the best man at my wedding.” Kuo is now chief of thoracic surgery and codirector of the lung cancer program for Banner MD Anderson in Phoenix, Arizona. Lago is a pediatric dentist in Massachusetts, with practices in Peabody and Lynn. They’re both married with kids, including 15-year-old sons who—wait for it—just spent two weeks together at the Brown Pre-College Program. And, yes, their sons were very good friends. As Kuo’s son, Tyler, puts it, “We spent, like, every day together and we got to know each other a lot and it was really fun. It was really easy.”

“He’s very social and easy to get along with,” Lago’s son, Noah, says about Tyler. I want to hear something from the boys about Hope—the dorm, the street, the feeling—but no. Nothing about the Ratty either. No calamari, good or bad. Just the immediate connection and ease. Time at the gym, and getting lunch afterwards, dinner after that, mostly at Andrews. “When Tyler and I arrived at Brown,” Noah explains, “my dad brought us around campus to his old dorm rooms. He showed us places he and Elbert would hang out, telling very complicated stories along the way.” Such as? “One year, his dorm was right next to one of the frat houses. . .”