He tossed his blonde curls and a spray of sweat hit my eyes; he slapped his beefy palm on my forearm and I felt sure it would leave a bruise; he dragged me around the room with his bony hips thrust against mine—all this before he even opened his mouth to bark, in harsh Cockney: “Bloody hell, woman, dancing with you is like dancing with the Great Wall of China.” And for an hour of this, I had paid £20. 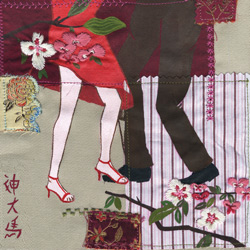 I was in a sweaty em­brace with Ian Waite, star of the BBC show, and we were halfway through my first private lesson as a member of the Oxford University varsity dance­sport team. My first month as a visiting student at Oxford, I had auditioned and been assigned a partner with whom I would train in preparation for monthly national and European-level competitions in Latin dance, a genre in which I had no previous experience. As in all other learning endeavors at Oxford, my introduction was as swift as the education was fastidious. My partner had four years of competitive Latin dancing under his belt; I was trying to put seven years of Russian ballet training behind me and learn to swing my hips with the Brits.

I was as unaccustomed to Latin passion as I was to British cultural insensitivity, and Ian’s teasing took me aback. Coming from a nation (not to mention a university) that prides itself on political correctness and racial sensitivity, I was unprepared for the persistence with which Britons asked me, “Where are you from?” “New England,” I’d respond.“ Yes, but where are you?” they’d persist. “New Hampshire,” I’d reply, a little emphatically. “Oh, but you are ?”

In high school, my Asian American faculty adviser taught me that the adjective can be used correctly only to describe inanimate objects. Used to describe people, it objectifies them and implies that they’re exotic. The fact that the word is so seldom used on North American campuses only validated my teacher’s mandate. So in the United Kingdom, when people asked if I was Oriental, I questioned the word’s definition. Al­though the term gets its negative connotation from European colonialism, it is, at heart, as prejudiced as any umbrella term used to characterize a people as “the other.” For contemporary British English–speakers, the term seems to be an attempt to indicate the population east of the Medi­ter­ranean as impartially as the term indicates the population that isn’t Eastern. How can we mark the divide between East and West impartially?

The question remains in my mind nearly a year after I suddenly became conscious of my Chineseness in a land where China and the United States are equally exotic. The answer may lie in a handful of clichés about fences and other sides of fences, and a hodgepodge of intellectual theories of cultural relativism. But a better answer lies in the value of displacing oneself abroad in order to better re-place oneself appreciatively at home. Though I may traverse this ambiguous border between the East and the West, Latin dancing in the British style, speaking in Chinese, and reading books in English, I will not forget the value of Ian Waite’s lesson. I cannot forget the tight triple-spins and hip-jutting Latin walks he drilled tirelessly into my partner and me so that in less than seven months, we were ranked second competing in Latin Jive at a U.K. Amateur National level event— nor can I forget when Ian, still grabbing my arm, hesitated: “You … You … are from China?” My grip on his arm was equally firm: “No, I’m American.

Reader Responses to Getting Oriented