You don't always know what you have until you lose it—a fact that became cruelly apparent to Andrés Idarraga when he was released from Rhode Island's Adult Correctional Institutions after serving six-and-a-half years for selling drugs. 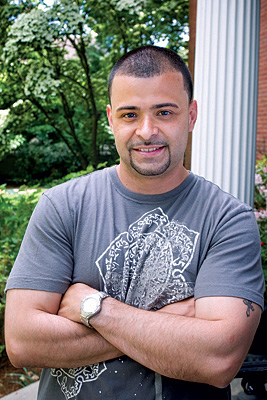 At the time, Rhode Island law stripped ex-felons of their voting rights, and Idaragga would not have been allowed to vote until his fifty-eighth birthday. So he teamed up with a local voters-rights organization to lobby for a state ballot referendum allowing ex-felons to vote. It was approved in November 2006. Idarraga immediately registered to vote.

After immigrating to Rhode Island from Medellin, Colombia, at the age of seven, Idaragga did well in high school but began dealing drugs in his later teens. Incarcerated at twenty, he read voraciously in the prison library and was soon tutoring other inmates for their GED exams.

When Idaragga was released on parole, he entered the University of Rhode Island then transferred to Brown after one year. An economics and literature concentrator, he is headed next to Yale Law School, where he will focus on defending young people's access to a quality education.

Why was it so important to you to be able to vote?

When I was incarcerated I read two books that affected me deeply. One was a biography of [the late Supreme Court Justice and civil-rights lawyer] Thurgood Marshall. The other was Nelson Mandela's Long Walk to Freedom. Both of these men helped to reform their countries—Mandela by securing rights for South Africa's blacks, and Marshall by representing the plaintiff in Brown v. Board of Education.

Their stories helped me understand my responsibilities as a U.S. citizen. Only through citizen participation can we powerfully create change. When a country starts to exclude certain people from voting, they're saying those people are second-class citizens. This is why the United States passed amendments during Reconstruction to prevent the exclusion of black males from voting. In the case of ex-felons, we have served our time and returned to lives as U.S. citizens.

Does support for ex-felons' right to vote divide along party lines?

No, this isn't a partisan issue. In Rhode Island in 2006, a Republican state representative spoke on our behalf in the legislature and helped to get the bill passed. Last year the Republican governor of Florida, Charlie Crist, issued a decree giving ex-felons the right to vote.

When did you decide to turn things around for yourself?

In prison I kept seeing people in the library, reading the newspaper. They invited me to join them. It took me a couple of years, but I did. What struck me was that these inmates read the entire newspaper from front to back, then had long conversations about the news. Also, I had always liked literature, so I read novels—Dickens, Tolstoy, all the great authors. I became a GED tutor. One of my students, a Laotian man, told me I made everything easy to understand. That meant a lot to me.

One day I was watching a Spanish news station in the prison lounge, and it showed a young man swimming across the Rio Grande from Mexico to the United States. But he never made it; he drowned. I was twenty-four then, four years into my prison term. I thought about my father and other family members who made a similar journey from Colombia. My family had risked their lives to bring me here! I decided that being a criminal was not the way to repay them.

Have you ever encountered overt prejudice?

When I was working on the right to vote, I received an angry anonymous e-mail that said: "You came to my country; you broke my laws. Go back to your country with the rest of the filth." The word "filth" stood out to me. Most immigrants come here and get a job and don't break the law. You have to continue to defy people's stereotypes.

What message do you have for young people about voting?

Voting is the number-one privilege and responsibility of a U.S. citizen. If you choose not to vote, you have no right to complain. I brought my little eight-year-old nephew with me to vote last time. It's important that he start noticing these things.

Former BAM editor Anne Diffily is Brown's director of publications and creative services. A version of this interview appeared in Today at Brown, an electronic newsletter for the campus community.