"Since I was three, I knew I wanted to be an inventor and an artist," Scott Snibbe says, "and that's what I became."Snibbe, thirty-nine, is both a fine artist and an applied one, working on the cutting edge of interactive digital art and social media. His installations appear in museums, universities, airports, and other public spaces, including one at the Beijing Olympics. The movement of the human body through space is, in fact, both a subject and a technique; to experience a Snibbe installation is to become part of it. 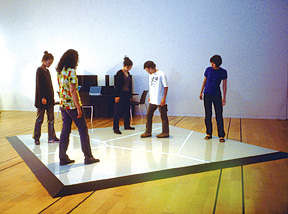 Visitors interact with one another in Deep Walls, seen here, and Boundary Functions (below left) at the Milwaukee Art Museum this winter.

Snibbe's installations typically involve a camera, computer, and projector. The camera captures images of people as they move, while the software analyzes the images for information and then makes the installation "respond in a meaningful way," Snibbe says. "It's not at all about new technology. It's about a way to emotionally and socially engage people to participate in a work of art or a science exhibit."

Two of Snibbe's creations, Boundary Functions (1998) and Deep Walls (2003), were featured in the Milwaukee Art Museum's Act/React Interactive Art exhibition this winter. Both are "interactive without an interface" (such as a mouse) and collaborative, says guest curator George Fifield. "Within that field, Scott is a standout." Describing Boundary Functions, Fifield says, "If one person walks across [the piece] nothing happens. If two persons walk, a line is drawn between them." As people join in, lines delineate their personal space. "When you reach out and touch someone next to you, you break the line and become one," Fifield says. "It's a very simple piece and unbelievably elegant. It makes you collaborate by first defining you as individual, which is a very profound thing." 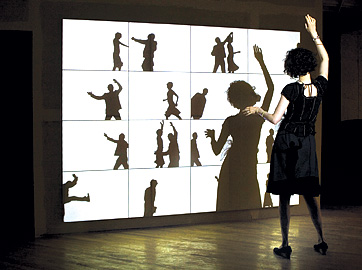 Born in New York City and raised in Scituate, Massachusetts, and Pebble Beach, California, by sculptor parents, Snibbe chose to attend Brown because its curriculum would allow him to easily combine his two loves, art and science. He earned bachelor's degrees in both fine arts and computer science, and a master's in computer science. He simultaneously completed the experimental animation curriculum at RISD. He entered the computer graphics laboratory of Brown computer science professors Andries van Dam and John Hughes primarily as an artist, he says, and learned how to write scientific research papers as well. (He now holds thirteen patents.)

After graduation, Snibbe worked at Adobe Systems, in Seattle, on the Adobe After Effects digital-effects program with fellow computer-science grads David Simons ’90 and David Herbstman ’90. On the side he developed an animated graphical communications program called Motion Phone that allowed people to collaborate on animations. An invitation to exhibit the device turned his hobby into a career. "I realized there was an audience for this new form of artwork that was interactive, that incorporated a person as part of the artwork," he says. His influences include abstract film, environmental art, and Tibetan Buddhism.

Snibbe continued to develop interactive pieces while teaching at art institutes and colleges, including UC Berkeley, Oregon State, and the San Francisco Art Institute. In January 2007, he launched the San Francisco company Snibbe Interactive to market his works. The California Academy of Sciences in San Francisco has commissioned three interactive pieces: Arctic Ice, which illustrates climate-related feedback loops in the Arctic; Bug Rug, which allows visitors to digitally trap bugs; and Galapagos, which explores colonization of the islands. Visitors can post videos of their museum experiences on Facebook and other social-networking sites.

Snibbe's goal is "to make a medium as emotionally engaging as a movie, but one in which you remain aware of your body and your relationship to others"—in other words, he says, "to communicate a vision of the world where people understand that we are all interdependent."