In 1978 Maria Lauenstein and Sonam Denjongpa moved to the Indian state of Sikkim, hoping to start a school. They had met a few years earlier at Brown, after Lauenstein's brother, who had recently returned from a stint in Nepal as a Peace Corps volunteer, asked her if she knew anyone on campus who spoke Nepali. A professor steered Lauenstein to Denjongpa, who'd grown up in Sikkim speaking both Nepali and English. At the time, Sikkim was still a semi-independent kingdom, and Denjongpa was at Brown thanks to its American-born queen, Hope Cooke, who had awarded him a scholarship to study there. The couple became inseparable after their first meeting and were married shortly after Lauenstein's graduation. 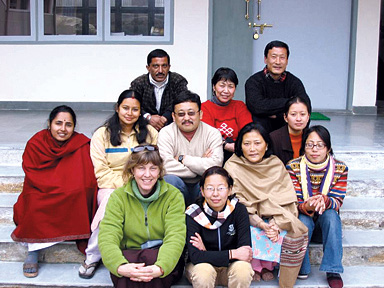 Courtesy Lauenstien Denjongpa Family
Maria Lauenstien (front row, left) with Taktse staff.
By 1978 Sikkim had been incorporated into India, and the transition was rough. Lauenstein and Denjongpa wanted their school to help preserve indigenous culture, an approach that Lauenstein says the Indian government treated with hostility. Four years after Lauenstein had arrived in Sikkim, she received a telegram from the government saying she had ten days to leave the country. She and Denjongpa moved to Massachusetts, where for the next twenty years they ran a catering company.

Every year, though, Denjongpa returned to visit Sikkim, and when he went back in 2002—this time with Lauenstein—he found himself sitting around a campfire with friends talking abut Sikkim's school system. "In that part of the world, education is based on a nineteenth-century British model," says Lauenstein. "It was designed to create clerks for the empire." The emphasis, she says, is on handwriting, spelling, and staying within the margins of a sheet of paper. When a member of the campfire group threw out the idea of starting their own school, everyone agreed it was sorely needed. Two years later, $460,000 had been raised and contractors broke ground on construction.

The Taktse International School opened in 2006. It now has around 150 students and runs up to the start of high school and has become an oasis of progressive education high in the Himalayas. Students sit on carpets laid out in a circle on the floor, and the size of classes is limited to twenty, about half the number common in nearby schools. The Takste School also rejects some of the country's more antiquated educational traditions. "We weren't going to allow beating in the school," Lauenstein says. "There wasn't going to be any public humiliation."

The Taktse curriculum focuses heavily on instilling a love of reading, but also involves frequent class trips to local government buildings, doctors' offices, and rice farms. "Educating is connecting to and understanding the world around you," Lauenstein says. She notes that parents were distrustful of the school's approach at first. "The parents wondered what kind of learning could be going on when the children were having so much fun," she says.

Taktse's goal is to help children cope with the onslaught of industrialization and modernization by giving them literacy and other practical skills while teaching an appreciation of the environment. "Kids who would not speak can now articulate full ideas," Lauenstein says. "We see kids who were basic readers now reading to enlarge their world."

Reader Responses to Enlarging Their World