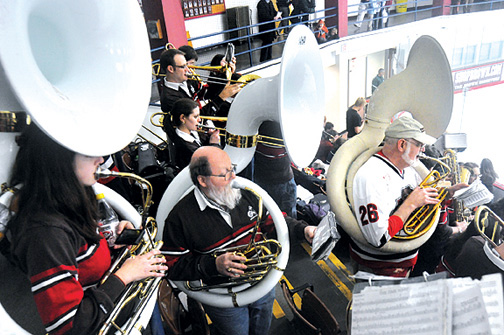 Tuba-players Paula Miller '08, Kenneth Sloan '69, and Wayne Carver '74 were among twenty or so Brown Band alumni who returned to Meehan Auditorium February 5 for a reunion on and off the ice. Replacing their customary blazers with sweaters and hockey jerseys, the musicians joined current band members for the men's hockey game against Harvard. (The Crimson prevailed, 5–2.) After the game the band, which claims to be the world's first ice-skating band, laced up and put on a show of its own on the ice.
What do you think?
See what other readers are saying about this article and add your voice.

Reader Responses to Reunion on Ice