A Lesson in Generosity

How hard can it be to give money away? Say you have $10,000. Would you use it to put a single child through a year of pre-kindergarten or to underwrite a new educational program for toddlers? For students in the sociology course Investing in Social Change: The Practice of Philanthropy, the question is not just academic. Thanks to Brown parent and trustee Marty Granoff, they really had $10,000 to give away. 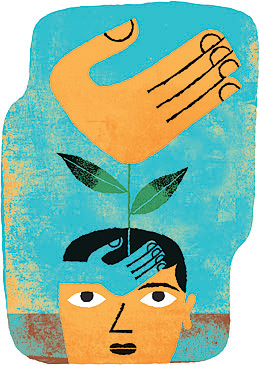 For the past three years, Granoff has funded the course, which gives two teams of students $10,000 each to fund a local educational or family-finance project. Sociology professor Ann Dill and Swearer Center for Public Service director Roger Nozaki '80 MAT, who co-teach the class, brief the students on the history and theory of philanthropy, and local guest lecturers familiarize the students with Providence's needs and nonprofits so that they have the background to make those two $10,000 checks count. Rhode Island Foundation president Neil Steinberg '75 has introduced students to the work of community foundations, and alums who've worked at the Clinton Foundation, including Ira Magaziner '69, have talked to the class about philanthropy's global potential.

Once the students zero in on a concrete approach, they ask for proposals. Last semester one team awarded $10,000 to an ESL preschool program, while the other $10,000 was split between a homeless shelter and Foster Parents of Rhode Island.

"It was hands-down the best class I've taken at Brown—very hands-on, very real world," says Raisa Aziz '11, who enrolled in the course her freshman year and has since served as a teaching assistant. Aziz, who is from Durban, South Africa, says approaching local nonprofits could have seemed patronizing.

"You have to be careful," she says. "You're a bunch of—what? —twelve Ivy League students stepping off the Hill for a brief moment before you leave and go away. And you're saying. 'I have this money; tell me why I should give it to you. Answer these questions.'" People didn't bristle, though. "It was a very interactive process," she says.

Dill says that most of the students who take The Practice of Philanthropy are activists who anticipate applying to foundations for grants in their careers and want to know how donors think. "Before this," Aziz says, "I was unaware that there was so much logic behind philanthropy. [The class has] spurred my interest in social entrepreneurship."

Aziz says it was also a treat to meet Granoff, who visits the class each semester. He and his wife, Perry, are known on campus primarily as the principal donors funding the University's new creative arts center, which is named in their honor. "I guess you could say my goal was to create a new generation of philanthropists," Granoff says. "I do a lot of fund-raising myself, and I've found that sometimes even what I call terminally wealthy people begrudge giving their money away. They give as if it were their last penny. I wish people could get more enjoyment out of giving."

Asked why he gets such pleasure out of giving, Granoff jokes that it would take years of psychoanalysis to answer that question. "I remember being very poor as a child, and I had a tin box that I put pennies in for a Jewish charity," he says. "Putting those pennies in the box always gave me a thrill."

Reader Responses to A Lesson in Generosity