When you learn that Emily Taylor has earned a prestigious Woodrow Wilson-Rockefeller Brothers Fund Fellowship for Aspiring Teachers of Color—a national award given out by the Woodrow Wilson National Fellowship Foundation in Princeton, New Jersey—you assume that she has always been a masterful teacher. Yet Taylor says of her experience teaching middle school in San Jose, California, during the summer of her freshman year: “It was one of the hardest things I’ve ever done.” 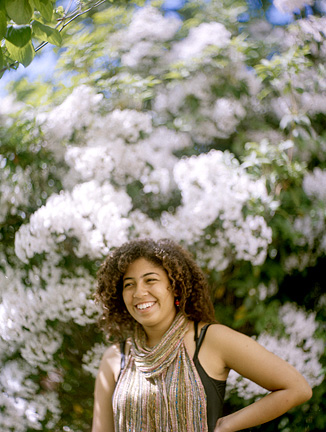 That’s when her talent and drive kicked in. Faced with having to prepare daily lesson plans, manage a classroom of kids who often did not want to be stuck in a classroom over the summer, she dreamed up innovative approaches to teaching literacy skills. She had her students make ice cream sundaes as a way of learning how to construct a paragraph. She asked them to stage a debate on whether the United States should be more like a melting pot or salad bowl. “I was so invested in it,” she says. “I just loved the time I spent with the kids.”

Two years later, as part of Brown’s Urban Education Semester program and later as the recipient of a Royce Fellowship from the Swearer Center for Public Service, Taylor spent time teaching and studying conflict resolution at a New York City elementary school. Every week, the school called its fourth graders together for a community meetingat which students and teachers aired their grievances and resolved conflicts.

“I was really blown away by the difference it made in the tone of the classroom for these kids to have a space to talk through their conflicts every week,” Taylor says. In fact, students were allowed to single out teachers or other students and identify a reason they’d gotten under the students’ skin.

“One kid can say, ‘You know, I didn’t like it when you didn’t let me play kickball with you,’” Taylor says. “The teacher will facilitate the working through it and call on the others kids in the class for suggestions for solutions.” One time, a group of boys complained that a particular teacher wasn’t calling on them when they raised their hands.The teacher was at first defensive, but then began to seriously consider the idea that she might be biased toward the girls. By the endof her time in New York, says Taylor, an ethnic studies concentrator,“I pretty much knew that teaching was what I wanted to do with my life.”

Taylor’s Woodrow Wilson-Rockefeller Brothers fellowship will enable her to spend a year at Stanford’s Teacher Education Program. It will also bring her closer to home; she grew up nearby in Menlo Park.

“A lot of kids are really just hurt and damaged by the educational system and not valued at all,” Taylor says. “The more times I’ve seen this firsthand, the more I feel like teaching is the best way I can do something about fixing the system.”