When Roger Mansell worked in the printing business in the 1980s, he had an office manager, Kenneth Grimes, who told him stories about his family. Grimes and his parents were among several thousand civilians and allied prisoners who'd been held at a Japanese internment camp in Manila during World War II. 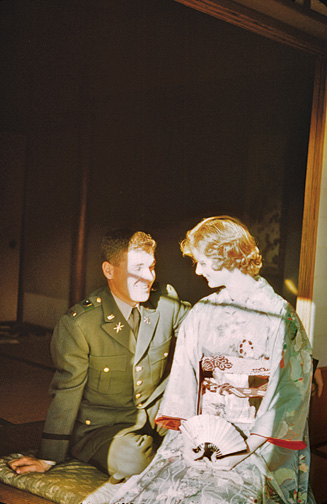 Courtesy Mansell Family
Roger and Carolyn Mayo Mansell '59 on honeymoon in Japan in 1959.
Grimes told Mansell about regularly seeing his mother and father beaten. He described how they starved themselves so he could have enough food. As Mansell neared retirement, Grimes, knowing of his love of history, persuaded Mansell to write a book about the American prisoners of war confined in Japanese POW camps.

Mansell had gone to college sporadically during the war, attending local institutions in the towns or cities where he was stationed. During one stint at the University of Texas in El Paso, he took a night class with a professor who, he says, "really made history live and got me hooked madly on it."

But when he started researching his book on Japanese internment camps, Mansell realized, "there was no way in the world that I could write a book that would really tell the full story properly." He narrowed his focus to the American prisoners on Guam in the South Pacific. He tracked the soldiers down through documents from the National Archives and Records Administration in Washington, D.C. He spent countless hours encouraging the former prisoners to write their own stories that he, in turn, promised to help preserve. He was inundated with personal diaries, memoirs, and photos.

Soon Mansell was reaching out to POWs all across the country. Between 1941 and 1945, the Japanese ran more than forty camps throughout East Asia. Approximately 36,260 Americans, including doctors, nurses, teachers, missionaries, and children, were put in the camps. Only half of them came out alive. Prisoners performed slave labor; they were beaten, starved, and often tortured. Mansell couldn't believe how many former POWs wanted to share their memories with him. In some cases, they had never spoken about their experiences before.

Mansell, who believes "the essence of good history is sharing the information," set up www.mansell.com back in 1999, and he posted all the documents and oral histories he'd collected. There are now more than 1,500 pages of varied information and 2,000 photos posted on the website—just a sampling of all the documents he's received.

Mansell estimates he has spent more than $280,000 of his own money and at least 18,000 hours on this project. His work has been cited and quoted in dozens of books, and he can be seen in the documentaries War Stories with Oliver North and Final Justice: War Crimes Trials of World War II, which is hosted by North.

Recently, the Hoover Institution Archives at Stanford University acquired Mansell's collection, one of its largest focused on the Pacific War. In addition, the Descendants Group of the American Defenders of Bataan and Corregidor, an organization dedicated to preserving the history of the Bataan and Corregidor camps in the Philippines, will establish the Roger Mansell Guest Lecturer Fund at its convention in June.

Mansell plans to finally slow down and hand over control of his website and archives to two researchers who've been volunteering for him for years. He is also excited that the Australian War Museum is maintaining a mirror copy of his website in its research archives. As Mansell says, "Ergo, it will be available to researchers in perpetuity."

Reader Responses to Hooked on History