When Business Can Be Fun

In 2005, after a phenomenally successful career as a real estate investor, Arthur Solomon ’61 decided it was time to pursue his long-neglected passion: baseball. He bought the New Hampshire Fisher Cats, a class AA baseball team in the Toronto Blue Jays organization, and then, three years later, added Kentucky's Bowling Green Hot Rods, a class A affiliate of the Tampa Bay Rays. 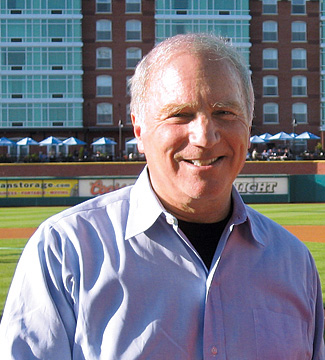 "My wife thinks I'm a little bit crazy," Solomon says. "She wonders why I needed [to buy a second team.] It's the pleasure of it. Real estate business is business. But baseball is a mix. It's maybe 60 percent fun and 40 percent business."

Solomon quickly mastered the mix. Under his ownership, the Fisher Cats, who are based in Manchester, boosted attendance by 45 percent. Attendance for the Hot Rods has also seen double-digit gains. And like a proud father, Solomon points out that thirty-four Fisher Cats players have gone on to play in the major leagues.

Solomon has romanticized baseball since his father took him to Yankees games from their home in New Haven, Connecticut, in the 1950s. It was then that Solomon began idolizing shortstop Phil Rizzuto. He had his brief fling with playing the game: he was a shortstop in New Haven's Little League, but jokes that he peaked at age twelve, when he was named a league all-star.

At Brown, Solomon majored in English literature and switched his allegiance from the Yankees to their archenemies, the Red Sox. "As a little kid I rooted for the team my father rooted for," Solomon says. "But I've transitioned to being a Red Sox fan after going to school and living in Boston for so many years."

After graduation, Solomon went on to found lucrative real estate groups at the Wall Street investment firm Drexel Burnham, and later headed the Lazard Fréres real estate unit, eventually amassing $10 billion in real estate assets for the firm. He has also done stints as the CFO of Fannie Mae and as president of the Berkshire Group, a national real estate and financial services firm.

By the time he reached retirement age, Solomon was head of the DSF Group, a Waltham, Massachusetts–based real estate investment firm he'd founded in the late 1990s. DSF now has more than $1.5 billion invested in properties from Boston to Washington, D.C., as well as overseas.

But Solomon says he still felt there was something missing in his life. After he attended a talk about investing in pro sports teams, he found his second calling. Owning a minor league baseball squad, he says, is easier than being involved with a big-league team; he is spared the bare-knuckled contract negotiations big-league owners face yearly. With all player personnel decisions made by the parent club, minor league owners are left to focus on marketing and selling tickets.

Solomon, who lives in Providence, also makes it a point to socialize with his teams' fans. At the stadium, he likes to greet ticket holders at the gates, and during the game he moves around the stands shaking hands. He also enjoys hanging out with the players. "It's real fun for my wife, Sally, and me," he says. "You get to know them on a real personal level. You get to know their history and their aspirations."

Several years ago, a few former Fisher Cats players came through Providence, so Solomon invited them over to his house for some home-baked desserts. Before he knew it, his four guests had gobbled down a tray of sweets meant to feed thirty-five people. "They're young, they're hungry, and they have big appetites," says Solomon. "They also don't get paid much."

Solomon goes to roughly twenty-five home games a year, most of them in New Hampshire. But it's still not enough: he's already put out the feelers for a third team.

Reader Responses to When Business Can Be Fun