Brown may be known for all the Rhodes Scholars it sends to Oxford, but three alums recently crossed the Atlantic not for academics but for sport. Craig Kinsley ’11 and Nikola Stojic ’97 were among the more than 14,000 athletes who competed at the 2012 Summer Olympics, and two-time bronze medalist Jimmy Pedro ’94 returned to the Games as head coach of the U.S. judo team. 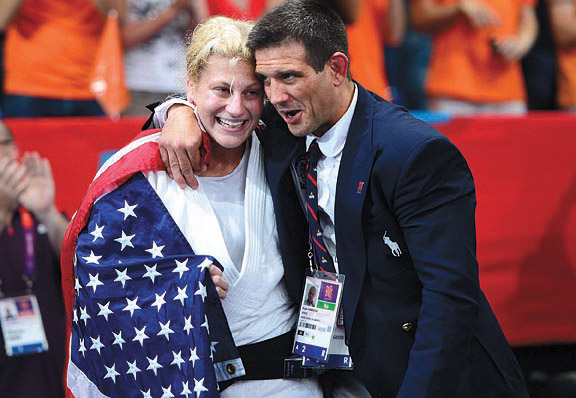 Andrew Weber
Judo coach Jimmy Pedro '94 with gold-medal winner Kayla Harrison.
Kinsley, who competed for the United States in the javelin, became the sixty-fifth Brunonian to compete in the Games. “Throwing in front of 80,000 people in the Olympic Stadium with the best athletes in the world is something that I enjoyed way too much to not do it again,” Kinsley says. “I am disappointed to miss the finals, but I came into the Games ranked thirtieth and finished twenty-third. Not what I was looking for, but I am holding my head high. I did everything in my power to represent myself, my family, Brown University, and the United States of America the best that I could. Four years is a long wait for the next Olympics, but the World Championships in Track and Field in Moscow is only 13 months away! Time to start training!”

“Being at the Olympics was amazing,” says Michelle Eisenreich, Brown’s Director of Track & Field and Kinsley’s coach. “I was walking through Regent’s Park and saw some kids playing ‘Olympics’: imagining themselves as champions representing their country. For most, the Olympics remain a childhood dream. To actually be part of the Olympic experience is an honor not taken lightly.”

Stojic, a member of the Serbian rowing team, competed in his fourth Olympics in the coxless pair with countryman Nenad Bedjik. They finished fourth in their heat and placed second in the repechage to advance to the semifinals. A sixth-place finish in the semifinals meant that Stojic and Bedik had to row in the B finals, but the pair did not start the final and finished 12th.

“Nikola has been an outstanding representative for Brown crew and Brown University,” says Paul Cooke, head coach of the men’s rowing team. “His participation in four Olympic Games is a tremendous achievement. His performance in international competition is a wonderful example for recent graduates and current student-athletes.”

In his three previous appearances at the Games, Stojic has finished fifth twice (Sydney and Athens) and seventh once (Beijing). In 2006, Stojic won a gold medal in the coxless pair at the World Championships and was named Sportsman of the Year by the Olympic Committee of Serbia.

With his trip to London, Stojic tied Pedro and Becky Kellar ’97 for most Olympic Games by a Brown alum. Pedro competed in four consecutive summer Games from 1992 to 2004, while Kellar competed in four winter Olympics and is Brown’s most decorated Olympian, with three golds and a silver.

In London, Pedro helped lead the U.S. judo team to its best performance since the sport became an Olympic event in 1964. Three of his athletes advanced to the semifinals, including Kayla Harrison, who won a gold medal, the first-ever Olympic judo title for the United States, and Marti Malloy, who won a bronze.

“Anytime that you make history, it is an amazing feeling,” Pedro says. “Being part of the most successful U.S judo team in Olympic history, I am one proud coach. When you have three athletes out of four make it to the semifinals of the Olympic Games, it is very fulfilling.”

One other alumna who represented Brown at the Games was Sarah Lamont Kocmond ’91, a former All-Ivy field hockey goalie whose company, S’Well Bottle, supplied the water bottles for USA Field Hockey. Field hockey fans can also buy the bottle knowing that their money is going to USA Field Hockey and to WaterAid, which helps provide access to safe drinking water for some of the world’s poorest people.