A Pool of Their Own 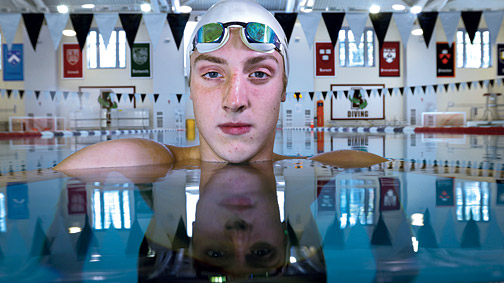 Scott Kingsley
Tommy Glenn '14 is delighted that the swim team now has facilities that are the envy of the league. He's already set scholl records in the pool.
So when the Smith Swim Center closed in February 2007, Coach Peter Brown found himself in a tight spot. Until a temporary pool was built in the Aquatics Bubble in 2008, his team had to practice and compete at whatever pool they could get at local colleges and high schools, and even at the Fox Point Boys and Girls Club. Even after the temporary pool became available, it was just a practice facility. All meets from 2007 to 2012 were held on the road.

“You didn’t ever get the chance to feel the school behind your back,” says Tommy Glenn ’14. “You never got to really experience the pride that people can have for athletic teams.”

Glenn, a top swimmer, was one of the athletes Brown recruited during those years in the Bubble. Fortunately for Coach Brown, Glenn’s older brother, Robby ’08, had swum for Brown. “His brother had a wonderful experience [here],” Coach Brown says. “His brother loved [the University], and I think that helped a lot.”

Although Glenn came from a highly regarded high school and club program in New Jersey, the facilities there were pretty basic. “The fact that we were in a bubble wasn’t much of an issue to him,” Brown says. Despite the temporary facilities, Glenn still managed to set the school record in the 100 and 200 butterfly and as a sophomore won both events at the Ivy League Championship meet. He competed at the 2012 NCAA Division I Men’s Swimming and Diving Championships, and finished thirteenth in the 200 butterfly and twenty-sixth in the 100 butterfly. His thirteenth-place finish in the 200 fly was good enough to earn Honorable Mention All-America recognition.

“No Brown male swimmer had made NCAAs and scored since 1958,” Brown says. Glenn followed that up by competing at the 2012 U.S. Olympic Team Trials after qualifying in the 100 and 200 butterfly.

And then last season Glenn and his teammates finally got to train and compete in their very own state-of-the-art pool when the Nelson Fitness Center, which houses the Katherine Moran Coleman Aquatics Center, opened on April 15, 2012. The facility, which has become the envy of other Ivy schools, finally allowed the team to schedule home meets on the Brown campus. “Now it is great having your friends come and cheer for you,” Glenn says. “It gives you so much more of a reason to beat the other team.”

Coach Brown is effusive in praising the new facility. “It has a beautiful feeling and look to it that catches anybody’s eye, especially someone who has been around pools,” Brown says. “It is a game changer.” It’s also the fastest pool not just in the Ivy League but in the entire Northeast. “This one not only looks nice,” Brown says, “but it is very well made and very well designed.”

This past March the team hosted the Men’s Ivy League Swimming and Diving Championships, an opportunity to show off the new facility. “All the coaches just loved it,” Brown says. “Any knowledgeable swimming coach would be envious of it.”

This year both Coach Brown and Glenn are confident the team can improve on its seventh place showing at last year’s Ivy championships. In order for that to happen, Brown says, everyone on the team needs to get better individually so the team can improve. Glenn, for his part, has been training hard. “This past summer,” Brown says, “he had some breakthrough swims at our U.S. Open meet. He has taken things to another level now.”

Over the summer Glenn trained at the North Baltimore Aquatics Club with legendary coach Bob Bowman, who has coached Michael Phelps and several other Olympians. During his time with Bowman, Glenn dropped four seconds off his 200 fly time and finished fifth at the U.S. Open meet. His time was the seventh fastest in the country, and he missed qualifying for the U.S. National team by one spot.
After graduation, Glenn plans to continue training with Bowman so he can make the 2016 U.S. Olympic team.

In Make Your Move, Jon Birger ’90 encourages straight women to go for what they want
Science & Tech

Reader Responses to A Pool of Their Own