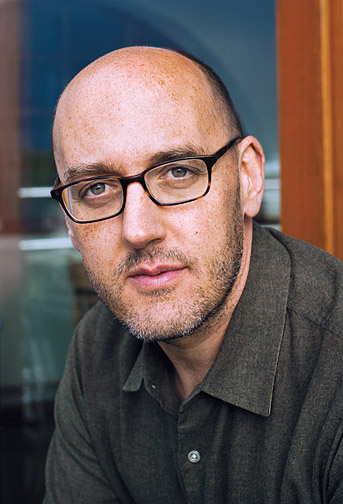 Heike Steinweg
Ben Marcus.
Leaving the Sea, the second collection of short stories by Ben Marcus ’91 MFA—he’s also written two novels—is a deft, sad, and darkly comic book, a confounding mythology for an alienated age. In it Marcus ranges between tales that are almost (but not quite) conventional and experimental pieces that explore and deconstruct, with patient, surreal melancholy, the mysteries of human interaction and the language in which they are couched.

Even among the more realistic pieces, something, inevitably, is awry. In “What Have You Done?” the central character, Paul, returns home to Cleveland, for the first time in a long time, and to a family that won’t forgive him for something he did—but what? Paul insists that he has changed his wayward ways—he’s married now, with a child and a steady job—but his family refuses to believe it. Or do they? Caught up in the tortured web of Paul’s point of view, we’re never sure, and in the end, we, too, doubt the existence of wife and child.

In “The Dark Arts,” Julian Bledstein is in Dusseldorf, staying at the Müllerhaus men’s hostel while receiving experimental treatment at a nearby clinic for an illness that is likely hysteria. This bleak gem of a story begins with Julian’s intimations of surreptitious couplings in the gym where the single men sleep: “Sometimes Julian could hear them going at it, fornicating as if with silencers on.” A night visitor to his bed sends Julian running in terror, but when a doctor at the clinic discovers he has a real illness—a brain tumor—he longs to plunge into this dark world, which he equates almost literally with the grave.

Gropings in the dark, whether literal or metaphorical, are frequent occurrences in this volume, as characters grapple with the inscrutability of self, other, and circumstance, and as language gropes, with ludicrous exactitude, to express the inexpressible. Strange comedy is the result.
In the masterfully written “First Love,” language is parsed, then parsed again in a wonderfully absurdist defamiliarization of a very familiar subject. “I could not sleep until I had labored through a regular lust application performed with motion, gesture, and languageflower,” the narrator says. 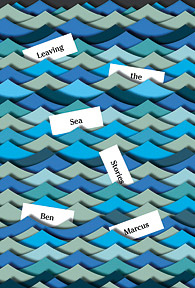 Aging, mortality, and the dissolution of families are recurrent motifs in Leaving the Sea. In “Watching Mysteries With My Mother,” a son worriedly observes his mother sleeping in front of a TV. All the time he wonders how likely she is to die in the next forty-five minutes (not likely, he decides). A long story, “The Moors,” centers on a man following an attractive female coworker to the office coffee wagon. His obsessive, ludicrous, lustful analysis fills page after page, finally bottoming out in the revelation that a sick wife at home is the real source of his anxiety and desperate (though somewhat repellent) need.

Leaving the Sea is Ben Marcus doing what he does best: upending our readerly expectations, scrambling our sense of what narrative is and what it can be.  In this new collection, he takes us on a strange journey into the human psyche, with all its exquisite contradictions.