Crew didn’t become an official, funded varsity Sport until 1961. Just five years later, in 1966, the team, under coach Victor H. (“Mike”) Michalson, made it to the prestigious Henley Royal Regatta in England. The Brown Daily Herald called it the “best crew ever.” Alas, at the Henleys it was matched up with the Tideway Scullers, “the de facto English national team,” says John L. Kirsten ’66, a member of the Brown team, which lost by a length and a half. 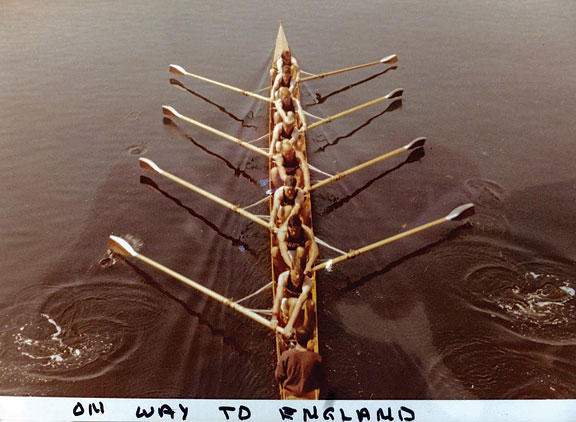 Credit
But the loss was more than made up for by the trip itself: “I don’t think many of us had even been in a jet airliner before,” Kirsten says, much less one headed overseas on open-ended round-trip tickets donated by the CEO of Trans World Airlines. The team stayed with local families, had a luncheon at a manor house owned by a Brown family relative, and celebrated the Fourth of July at the American ambassador’s house in Regent’s Park. “It was very posh,” Kirsten remembers.

Fifty years later, on Saturday, May 28th, 16 of the oarsman on that team returned to the boathouse to recall the event—and to get back into shells on the Seekonk River. Two teammates, Scott Hensel ’67 and Jim Bell ’67, had died, and Jay Ambrosini ’67 couldn’t make the trip. But for the rest of the team, “the years sort of melted away,” says Kirsten, who organized the reunion with former teammate Albin Moser ’67. “We were catching up and joking about which ones of us were going to survive this experience, and which one of us had brought a defibrillator.” After a mile’s row up the river and back again, wearing shirts that replicated their 1966 uniforms, the former teammates had lunch at the Narragansett Boat Club. No defibrillators were employed.

Reader Responses to “Best Crew Ever”