You could call it her a(lo)ha moment. Gail Stringer ’88 was concerned about a close friend in Seattle looking after an ailing mother. Having grown up in Honolulu, Stringer wanted to give her friend a genuine fresh-flower lei. 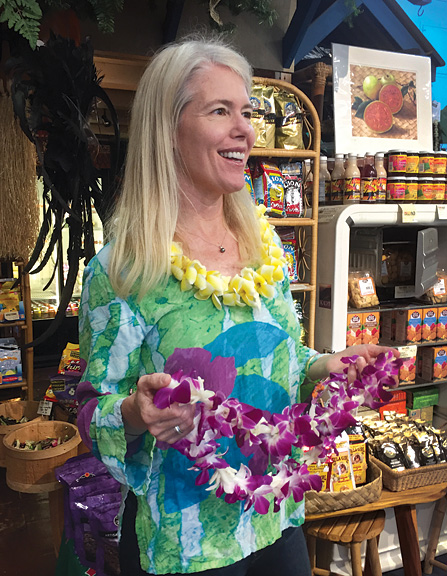 “In Hawaii,” she says, “it’s a classic expression of aloha, which everyone thinks translates to hello or welcome, but it means much more than that—it’s an act of kindness or love.” But when Stringer looked for a lei for her friend in Seattle, she couldn’t find one that seemed appropriate.

Her frustration led to an idea. “It sounds almost silly,” she says, “but I wanted to open a store in Seattle where people could buy a lei when they needed one.” She ditched her graduate studies in education to take the plunge into retail, and soon drew up a business plan for her lei store. “I thought it was pretty good,” Stringer says, “but I’m sure someone from the Wharton School would have had a different opinion. I’m definitely not a logical, linear, left-brain thinker.”

Setting up shop for what she called the Hawaii General Store wasn’t easy. “I met with several small-business-assistance groups, but they all told me I was crazy,” Stringer recalls. Undeterred, she eventually secured a loan from—where else?—the Bank of Hawaii. Friends and family also pitched in, donating start-up money and sweat equity.

“My dad painted a mural of the Ko’olau mountains on the back wall, and someone he knew at work had a connection at Hawaiian Airlines, which gave me an in with shipping costs,” she says. “In the islands there’s a big emphasis on ohana, which means family, in the broadest sense of the word. This was all very much an ohana process.”

The next challenge was stocking the shelves. “I wanted things that Hawaiian expats or people of Hawaiian descent would feel represented their culture well, like authentic hula implements and classic native artwork,” Stringer says. She added such island munchies as coconut balls, Kauai Cookies, and dried cuttlefish to the mix.

But the heart of the business was leis. Friends handpick flowers from her grandmother’s backyard in Honolulu, and a fresh batch of leis arrives every week. Each one requires about fifty flowers, and at $21 a pop, they are a steal. “Not quite a loss leader, but it comes close,” says Stringer, who also makes room in the store for her kitschy e kala mai (or excuse me) corner. “I know it’s so wrong,” she says of the dashboard hula dolls, cheesy luau supplies, and tiki mugs. “But it keeps the business afloat.”

Stringer says she’s amazed that, after nearly twenty years, the Hawaii General Store is still up and running. The reason, she believes, is that the store, which also offers classes in Hawaiian quilting, lei making, and language and fine arts, has become a gathering place for Seattle’s Pacific Islander community.

“It’s a cliché,” Stringer says, “but if I had a dollar for every person who comes in and cries because they’re so happy to find something that reminds them of home, I’d be rich. I just hope to sustain that—and let people buy a lei without breaking the bank!”