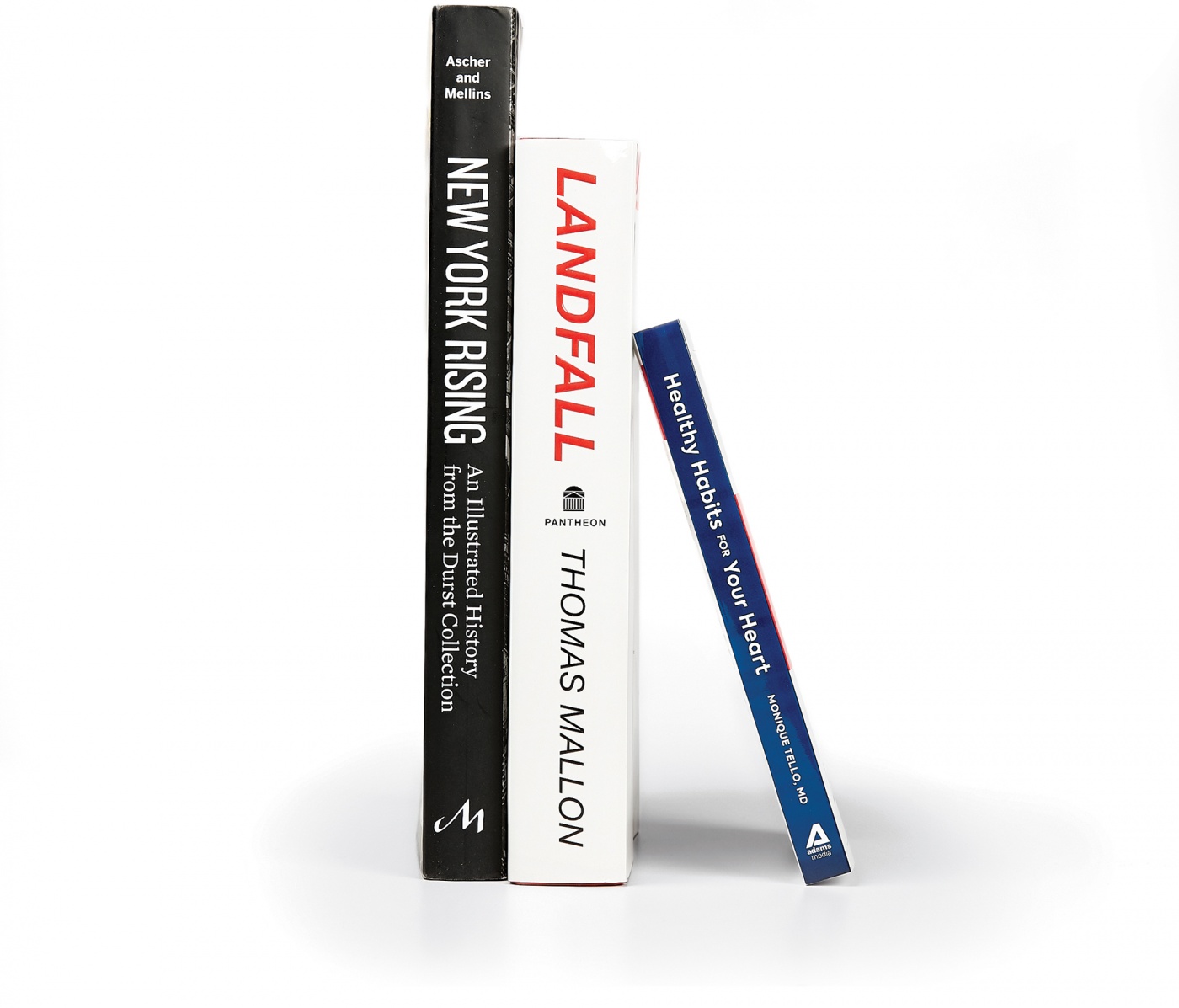 New York City has been morphing for centuries. In this sumptuous, very readable volume, layered with photographs, vintage postcards, maps, blueprints, and illustrations, ten scholars have composed visual roadmaps charting the city’s rise. Using images from the Durst Collection, now housed at Columbia, the chapters range from the city’s founding by the Dutch to the explosion of apartments starting in the 1860s and the transformation of Times Square. The archive itself was collected by late real estate developer Seymour B. Durst, who began amassing New York memorabilia in the 1960s.

In his tenth novel (Dewey Defeats Truman, Henry and Clara), Mallon continues his mastery of political historical fiction, this time taking on the presidency of George W. Bush. Landfall has the spine of a romantic comedy as Allie O’Connor, a national security advisor, and Ross Weatherall, a humanities administrator—a fictional on and off again couple—bob and weave through a vast trove of real life characters, including Condoleezza Rice, Donald Rumsfeld, Barbara Bush, and George W. himself. The book opens in 1978 but settles in on Bush’s second term amid the turmoil in Iraq and the disaster of Hurricane Katrina. A deeply detailed, darkly funny read.

Healthy Habits for Your Heart: 100 Simple, Effective Ways to Lower Your Blood Pressure and Maintain Your Heart’s Health  by Monique Tello ’95 (Adams Media).

This crisp, witty compendium has all the advice you’ll need to rework some nagging habits and help prevent heart disease. It’s full of suggestions you might know—aim for a plant-based diet—plus some you might not have thought of: learn to say no and start a gratitude journal. There’s plenty of clear-eyed research along with exercises to try and quick case studies. While this might not make a great bedtime read, it’s well worth dipping into. Tello is a primary care physician at Massachusetts General Hospital and a contributor to the Harvard Health Blog.

Bossed Up: A Grown Woman's Guide to Getting Your Sh*t Together by Emilie Aries ’09 (PublicAffairs)

Counter-Cola: A Multinational History of the Global Corporation by Amanda Ciafone ’00 (University of California)

Thanks A Thousand: A Gratitude Journey by A.J. Jacobs ’90 (Simon & Schuster / TED)

The Historian's Eye: Photography, History, and the American Present by Matthew Frye Jacobson ’87 AM, ’92 PhD (UNC)

The Drama of Celebrity by Sharon Marcus ’86 (Princeton)

The Tribalization of Politics: How Rush Limbaugh's Race-Baiting Rhetoric on the Obama Presidency Paved the Way for Trump by Ian Reifowitz ’93 (Ig)

The Talmud of Relationships, Volume 1: God, Self, and Family and Volume 2: The Jewish Community and Beyond by Amy Ross Scheinerman ’79 (Jewish Publication Society)

It's Hot in the Hamptons by Holly Peterson ’87 (Morrow)

The Wall by Rick Stockwell ’79 (Fervent)

The Night Before by Wendy Walker ’89 (St. Martin's)