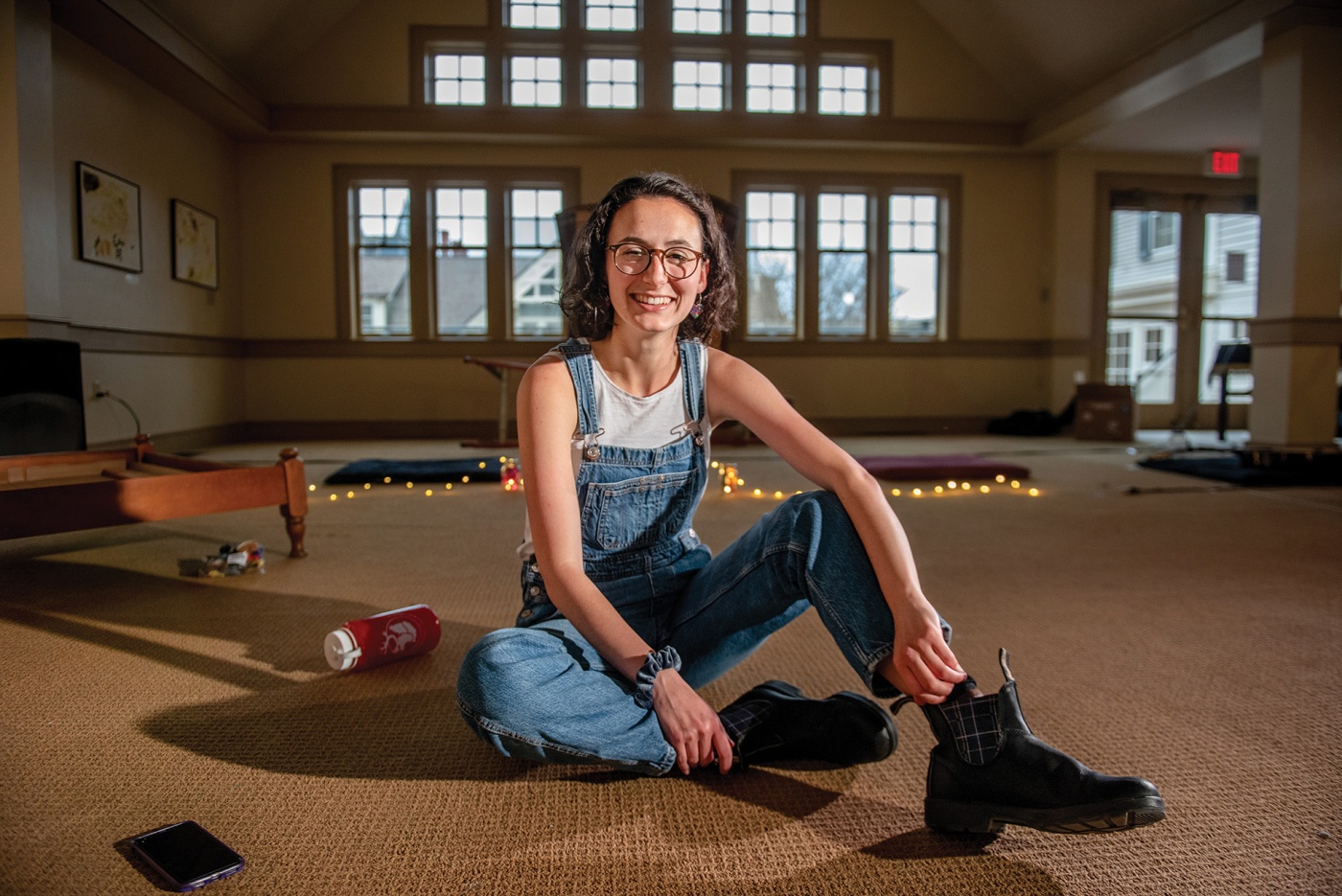 Goldin leads a rehearsal in the chapel at Hillel. Photo: David DelPoio

Kaitlin Goldin ’23 is perched on a table in Sayles Hall room 300, but she and the other students in the room are far away, at a sprawling summer camp—the setting for Goldin’s play, Barb. In jeans, a green wool sweater, and a pair of red Chuck 70s, Goldin wears an air of easy confidence as she watches the cast work next to associate directors Maxime Hendrikse Liu ’23 and Eli Gordon ’25.

Barb centers upon a protagonist, Kathleen, who is discovering that she’s a lesbian while at an all-girls sleepaway camp. The play was inspired by Goldin’s own experience attending summer camp and reckoning with her sexuality in this ultra-heteronormative environment—but no one character is written to mirror her directly. In fact, Goldin sees herself and her experiences refracted in each character, in different ways.

The namesake of the play is an omniscient but never physically present character, a mystical matriarch of the camp who represents a “pillar of morality,” Goldin says. It’s later discovered that Barb herself was a lesbian who cheated on her husband, giving the main character a “point of reference” for her own sexuality.

The play, toggling between the characters’ experiences at ages 9 and 15, interrogates our relationship to “home”—particularly homes that are deeply flawed. “Even though we can call these places home, they’re often so problematic,” she says. “And how do we hold both the love we have for these places and the deep sense of critique?”

“There’s so much pain built into this show and this experience, but I also think it’s pretty hilarious,” Goldin adds. “And when we make people laugh, we make them listen.”

Goldin wrote a first draft of Barb for a playwriting class in the spring semester of her sophomore year. After unsuccessfully pitching it to a number of theater boards at Brown, Goldin applied for funding from the Brown Arts Initiative. “I decided that I was just gonna do it myself,” she says.

Barb has gone through a number of iterations and Goldin owes the ultimate product to the many eyes laid on it throughout the writing process: “This doesn’t feel like a play that I alone wrote.”

That’s “incredibly rewarding,” she adds. “If you open yourself up to the opinions and perspectives of other people in the directing process, and you hand over a lot of control, you discover so much about the work that you wouldn’t have otherwise.”

Goldin feels the same way about her actors, giving them the space to bring themselves into their characters. “I continue to learn new things about these characters,” she says. “It’s a continuous process of discovery. Which is cool, because you want art to be dynamic and not a thing that exists on a page.”

Eliana Blumberg ’24, who plays Kathleen, felt a personal connection to the play from her first read, having attended an all-girls school and having discovered her sexuality in that context. During the first read-through of Barb, Blumberg recalls, Goldin said to her cast: “This play is gonna grow with us.”

“This story,” Blumberg says, corroborating Goldin’s intent, “has become all of our stories.”