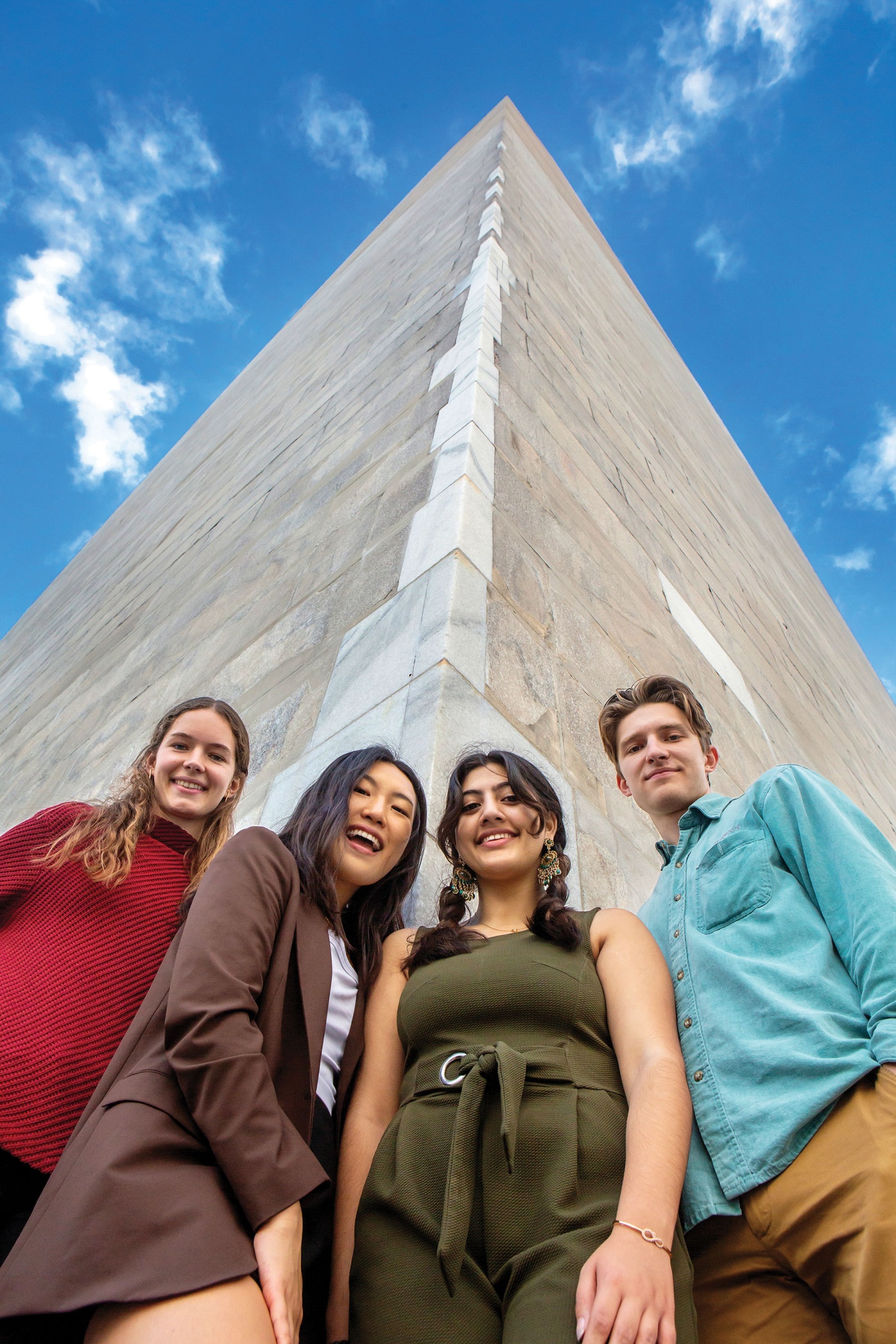 Isabelle Sharon ’23.5, Alice Im ’24, Ruhma Khawaja ’24, and author Peder Schaefer ’22.5 at the base of the Washington Monument.Photo: DA Peterson

On the third day of her internship, Alice Im ’24 was helping staff an event in the White House when President Joe Biden appeared.

“He walked over to where all us interns were and joked that he had taken a wrong turn in his own house,” says Im, smiling. “That was my biggest celebrity moment.”

Brown in Washington, a semester-long program started by the Swearer Center for Public Service, gives students the opportunity to spend either the fall or spring in D.C., taking classes while interning part-time for government agencies, members of Congress, and nonprofits. Students receive course credit for the internship while also taking two classes as a cohort and one remote course. This semester, the nine-person cohort is taking a course on diplomacy (with former USAID Director Brian J. Atwood) and a course that helps them to integrate their internship experience (with Professor Madeleine Campbell).

Im, a junior from Oregon studying science, technology and society who is working at the White House Office of Science and Technology, says she decided to come to Washington after taking a sophomore year trip to Tougaloo, Mississippi, with the Bonner Community Fellows program. There Im was introduced to the idea of making change through shaping policy at a social justice conference. Now, working in the Eisenhower Executive Office Building next to the White House, Im supports a team that is bridging the gap between science and society to make sure all Americans can benefit from scientific advancement.

“The program lends itself to people who are interested about the world, and that makes for interesting people.”

Isabelle Sharon ’23.5, who hails from Macon, Georgia, is studying artificial intelligence at the Brookings Institution, where she’s been helping with research on extremism on online platforms. Sharon says she “wanted to try out real life before it starts” and do policy-related work after having worked for different tech companies.

“It’s nice to feel a little more independent, and you walk outside and there’s a world outside, and it’s not just Brown’s world,” says Sharon. “The program lends itself to people who are interested about the world, and that makes for interesting people.”

Ruhma Khawaja ’24—a junior from Oswego, New York, studying international and public affairs—has been interested in coming to D.C. with the program since she applied to Brown.

“I wanted to pursue every opportunity that was available to study policy and law,” said Khawaja. “I also wanted to explore a city where I might want to live.”

Khawaja is working with the Voter Empowerment Project and the International Rescue Committee, supporting increased voter access and researching policy and legislation that affects refugees and asylees.

When they’re not working or exploring museums, the students live together in D.C.’s Chinatown cohabitating with students from American and Howard, law students, and others recently moved to the nation’s capital. (That includes me—I’m in the program, interning at NBC News, so I was able to snag my subjects as they ate a meal in our dining room.)

“I feel like our house is a little family,” says Im, and Sharon adds that after so much remote learning during lockdowns, it’s great to have a strong community.

“It’s kind of miraculous that we all get along,” Sharon says with a smirk, sitting in the house’s communal kitchen as housemates speed by, rushing to catch the train.

Reader Responses to Inside the Beltway