Too Jew For Who?

Singer-songwriter Sean Altman wants you to imagine this: a bunch of Jews sitting around an Irish bar getting drunk and singing about the joys of drinking Christian blood. Altman's fantasy Jews sing:

Raise a glass and drink a toast to Christian baby blood

What do Christians feed their babes to make it taste so good? 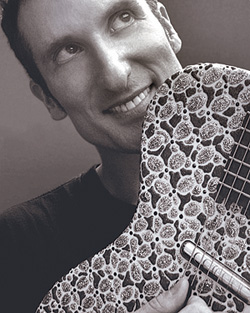 These are the lyrics to one of the songs on Altman's latest album, Taller Than Jesus, a send-up of anti-Semitism and Jewish culture that somehow manages to make you feel squeamish and laugh hysterically at the same time. The track "Another Inch," for example, is all about Altman's desire to be more well-endowed. Backed by his new act, Jewmongous, Altman belts out tunes with titles like "Just Too Jew For You" and "My Pact with Satan" in a style that is half Beatles and half Weird Al Yankovic.

Altman's last effort, 2006's Unorthodox, which he put out with Rob Tannenbaum '83, and their act, "What I Like About Jew," satirized circumcision and Bar Mitzvah ceremonies (the duo have since split up). As a Jewish grandmother might ask, "Can this possibly be good for the Jews?"

Altman counts himself among a generation of Jews confident enough to turn anti-Semitic slurs and even historic tragedies into good fun. "It's the Jewish equivalent of the Black Power movement," he says. "These are the quirks of our people, and we embrace them."

Only a decade ago Altman, sporting a braided blonde mullet, was singing on afternoon television. In those days he and the band Rockapella were the sound of Where in the World is Carmen Sandiego?, a PBS trivia game show for eight-to-twelve-year-olds. The group also did ads for Taco Bell and Folgers coffee.

But the show ended in 1995, and Altman went off to pursue a solo career, writing zippy grown-up pop songs that drew inspiration from Elvis Costello and the English band XTC. Some of his work was plaintive and anguished; he wrote the song "Unhappy Anniversary" about his divorce. Occasionally in concert he'd throw a Jewish-themed song into the mix just to break things up. "I was dabbling in this Jewish thing pretty much as a lark," Altman says. "But lo and behold, it was getting more attention than anything else I was doing." The media loved it. Audiences called for more.

Altman, who grew up in the Riverdale section of the Bronx, doesn't consider himself religious. "I connect with many of the cultural things about being Jewish that don't have anything to do with God," he says. In fact, several of the songs on Taller than Jesus poke fun at just how divorced secular American Jews have become from religious Judaism. In "What the Hell is Simchas Torah?" Altman makes light of Jews' widespread ignorance of what the holiday celebrating the reading of the Torah is all about. "There's no supermarket section to give us Jews a hint," he sings. "Do we fast, do we eat? Is it dairy? Or meat? Or dust bunnies and lint?"

Taller Than Jesus is set to be released in April—just in time for Passover.

Reader Responses to Too Jew For Who?