Every Teacher and Student Deserves Respect

When Ted Sizer arrived on campus to chair Brown's education department in 1984, Horace's Compromise, his transformational book about high school teaching and learning, had been out for less than a year. But it had already begun making waves. Subtitled The Dilemma of the American High School, the book described the frustrations of a fictional teacher, Horace Smith, as a way of articulating Sizer's educational credo. It was a credo forged during Sizer's career as a teacher, as head of Phillips Academy in Andover, Mass. and as dean of Harvard's School of Education, and it was honed during the three years preceding his Brown appointment, when Sizer led a national inquiry into secondary education. Sizer, one of the country's preeminent education reformers, died of colon cancer at his home in Harvard, Mass., on October 21. He was 77. 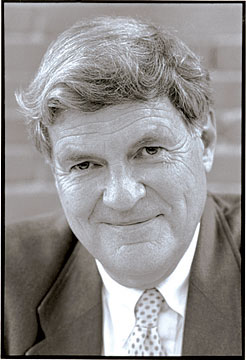 Tall, tweedy, and affable, Sizer became a well-known figure on the Brown campus and a sought-after speaker locally and nationally. He welcomed his new role as a college professor and valued his colleagues on the Brown faculty: "They are not bound by narrow disciplinary lines, and there is little pretension," he told the BAM in 1986, praising qualities that meshed with his educational views.

After Horace's publication, Sizer devoted his career to taking on an entrenched and often ossified system of high schools, and proposing radical changes to both the content and delivery of secondary education. His model was student- and teacher-centric: it emphasized teaching fewer academic subjects in smaller classes for longer blocks of time. Sizer believed education had become muddied and needed to refocus on such essentials as respect for the individual student and a progression through levels of learning that depend on demonstration-based evaluations of knowledge. Indeed, the aphorism "less is more," which Sizer learned from his Yale art professor father, would inform his entire proposed learning enterprise.

Sizer helped found two national school reform organizations based largely on his ideas: the Coalition of Essential Schools and the Annenberg Institute for School Reform. "Every school," he once said in an address to the Coalition of Essential Schools, "should be a decent and thoughtful and safe place.... Every child deserves to be known well.... Every teacher, likewise, deserves the respect of substantial autonomy within an honest and supportive community."

Not all educators welcomed his ideas. Press pundits mocked his principles as impractical: "a flight of fancy [that] etherealizes an issue that needs a hard-headed approach," a Providence Journal editor wrote of Horace. A "prescription ... from outer space," opined a columnist in Connecticut who then played the elitist card: "sort of a travelogue by a Yale graduate with a Harvard Ph.D." Undersecretary of Education Chester Finn called the ideas in Horace "fuzzy ... not specific enough."

To further explore the utility of his theories, Sizer, with his wife, Nancy Faust Sizer, who is also an educator, joined with parents in 1995 to found the Francis W. Parker Charter Essential School in Devens, Mass., which is based on the "Ten Common Principles" promoted by the Coalition of Essential Schools. Sizer, who had left Brown in 1996 to apply his concepts, served as co-principal of the Parker School with his wife during the 1998–99 academic year. (They continued afterward as trustees.) Their experience led them to write Keeping School, which was published in 2004. The couple also founded the Forum for Education and Democracy, an "action tank" for enlightened education of U.S. citizens.

Sizer remained involved with the Coalition of Essential Schools for the remainder of his life. In a speech to the Coalition's fall forum in 2002 in Washington, D.C., Sizer urged participants to believe in a democracy fueled by education according to the principles he had developed. "Let us persist," he said. "Let us learn from each other.... And let us be heard."

Sizer's former colleagues and students remembered Sizer as a superb teacher. Students "flocked to his office," recalls Paula Evans, a longtime Sizer colleague and former director of Brown's Institute for Secondary Education. He was a visionary who was also a warm and thoughtful man, according to Jennifer Perry-Daly '92 MAT, a former Sizer teaching assistant in Brown's MAT program, which Sizer also reformed. Ted "loved schools, conversation, and teaching," wrote John Andrews '94 MAT, another Sizer teaching assistant. "He made it look like fun, even when it was very hard work. He was, and is, a ... lighthouse on my journey to become a good teacher."

Reader Responses to Every Teacher and Student Deserves Respect