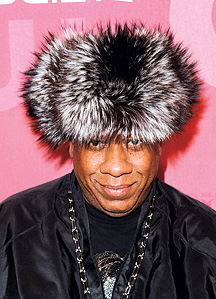 When America's Top Model starts its fourteenth season this spring, Vogue editor-at-large André Leon Talley '73 AM will join Tyra Banks and Nigel Barker on the judging panel, replacing the divine Miss J. (J. Alexander) who will be coaching contestants. Banks told Women's Wear Daily she'd tried to get Talley on the show from the start. "A lot of people can speak about fashion, but it doesn't necessarily translate to strong television," she said. "But André speaks about fashion and he has such a passion, and the words—the adverbs, the adjectives—he uses! I know it's going to make the viewer at home go, 'Wowww.'" (With a master's in French, Talley comes by those adjectives naturally.) Designer Ralph Rucci fashioned the fashion czar thirteen custom-made cloaks for the show. "We came up with these wonderful designs that are based on seventeenth-century Edo samurai tunic-coats," Talley told WWD. Of her own look this season, Banks said, "I went back to Yves Saint Laurent 1991, honey. I said, 'This is André Leon Talley! No earrings, no nothing. Just me and the gahhment.' "
What do you think?
See what other readers are saying about this article and add your voice.