Brown's most influential teacher is also its most self-effacing. It's no exaggeration to say that engineering professor Barrett Hazeltine's Engin 9 launched more careers than any other single course. It not only introduced the study of entrepreneurship at Brown; it created thousands of entrepreneurs. 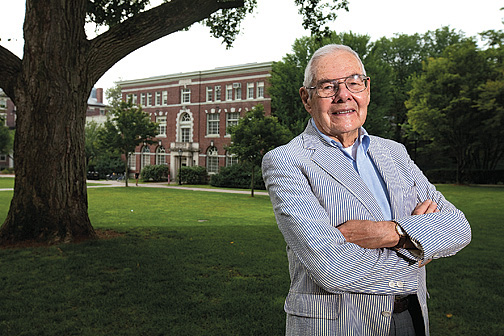 Scott Kingsley
"I think what most people need is encouragement and the confidence they can do it," Hazeltine says.

When at last spring's Commencement President Ruth Simmons invited Hazeltine to the stage to acknowledge his fiftieth year teaching at the University, he somewhat self-consciously made his way up the steps, gave the crowd a quick wave, then quickly returned to his seat near the people who have made him the most comfortable for five decades: students.

Over the telephone one hot day in August, Hazeltine, who was taking a break at his summer cottage in New York's Adirondack Mountains, talked about those fifty years. By his count, he has taught nearly 30,000 students, and a surprising number of them keep in touch. And even though he's been an emeritus professor for the past dozen years, he hasn't slowed down much—"for better or for worse," he says.

These days the biggest push in higher ed is for attracting research dollars, which is why Hazeltine is grateful for the president's acknowledgement of his teaching.

"It's one thing to work on starting programs," he said, "but I think it's really much more gratifying to have been involved with students and their lives. I'm not sure that always gets recognized. It's very easy to put a list of papers on the wall, but I think what makes an institution special is the interaction between students and faculty."

When asked why he chooses to get so deeply involved with his students' lives, Hazeltine hedged: "I never thought about that." After a few seconds, he began: "It's very gratifying to see people's lives come together—no, that's too pretentious." He began again: "It's very nice to talk to young people who have ideas and make some suggestions and help with their ideas. I think what most young people need is encouragement and a confidence that they can do it. Brown students are smart enough to figure out most of the problems they face, but what they really need is the feeling: 'I can do this! I'm smart enough and strong enough.'"

Given how competent so many students are, Hazeltine said, it's easy to forget they are at a very vulnerable age.

"On the one hand, they're breaking away from family. On the other hand, they're looking at all the possible things they could do in life." All of which can be pretty scary.

"And the trouble with it being scary," Hazeltine said, "is that it's not quite clear who you go to. You'd like to know that the person you're talking to is older, if not necessarily wiser, and has a little perspective on what looks terribly scary."

These days Hazeltine spends some of his time teaching in Africa, where he also studies how developing countries are adapting to modern technology. At Brown he now teaches courses in this subject as well as in social entrepreneurship. If not the founder, he is the godfather of the University's program in commerce, organizations, and entrepreneurship, and he has a professorship named after him.

Hazeltine is even the focus of a social-networking site.Three years ago a group of former students formed BrownHEN, where Hazeltine protégés can exchange ideas online.