The day after Hurricane Irene hit Rhode Island in August, several members of the men's hockey team set out to enjoy the calm after the storm at a beach in Little Compton, about forty-five minutes southeast of Providence. After ten minutes of hanging out, the students were shocked out of their reverie. "We heard screaming," says Michael Borge '14. "I saw two girls flailing in the water." 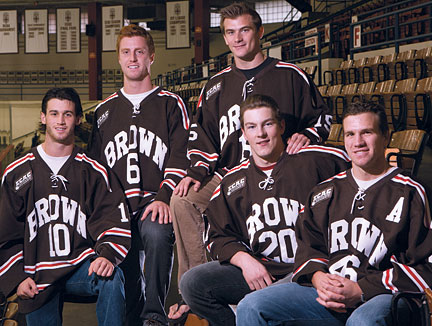 "Once everyone realized what was going on, there was zero hesitation," says Robert Farnham '12. Teammates Michael Wolff '12 and Jeffrey Ryan '13 swam out to the two teenagers and carried them out of the riptide and onto the beach. One of the girls then yelled, "Save my boyfriend!"

Farther out to sea, a boy was floating motionless on his back. He was being carried further and further offshore.

Farnham, Michael Borge '14, Dennis Robertson '14, and former teammate David Brownschidle '11 swam out to the boy. "When we first got to him, I thought he was dead. He looked lifeless," Borge says. The three hockey players pulled the boy onto a boogie board and began to swim to shore. It wasn't until they were struggling to reach land that Borge says he "realized how fast the rip [current] even was."

They managed to make it to shore in five minutes. "Arm in arm, Ryan and Robertson walked [the boy] up the beach," Farnham says. They were soon joined by Wolff, Ryan, and the two girls. "It had happened so fast and didn't seem real," Farnham says.

The local newspapers called the five players heroes. That's not how they see it. "We didn't decide. We just reacted," says Borge. "You really don't decide in those situations."