If you had asked Hayley Moore ’08 what she wanted to be when she grew up, she would have replied without hesitation: “a hockey player.” A star on the Brown women’s ice hockey team, she led the squad in scoring for her final three years. Her career totals (69 goals, 64 assists) rank eighth all-time in program history. 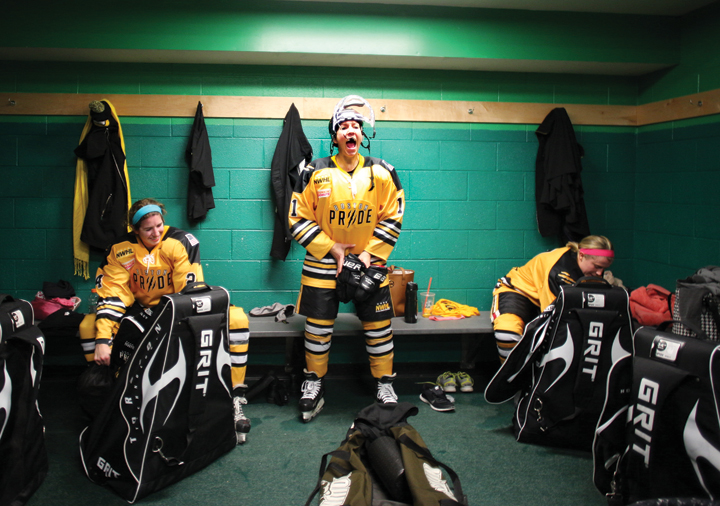 Tim Clayton/Corbis
Hayley Moore '08, center, GM of the Boston Pride, suited up as an emergency player.

After college, though, the dream ended. As a young player, Moore had seen the gender inequalities in the sport but thought, “By the time I get older, there’s going to be a league for us.” There wasn’t. So Moore became assistant athletic director for St. Mark’s, a boarding school in Massachusetts. There she met Dani Rylan, a St. Mark’s alumna, who would soon become the founder and commissioner of the National Women’s Hockey League (NWHL).

A few years later, while Moore was coaching at Harvard, the connection paid off. Rylan asked Moore to help her build a Boston team out of her NWHL business plan. In 2015, Moore became general manager of the newly formed women’s professional ice hockey team, Boston Pride, and later was named deputy commissioner and director of player development for the NWHL.

Moore and the league have seen tremendous success over their first two seasons. Moore’s Boston Pride won the inaugural Isobel Cup, made it to the championship game again last season, and now gets to call as its home rink the brand new Warrior Ice Arena, the practice facility of the Boston Bruins.

As the league continues to grow, Moore aims to strengthen NWHL’s relationships with such governing bodies as USA Hockey, Hockey Canada, and the NCAA, as well as to help evolve the league’s youth hockey initiatives and community outreach. She’s also working on projects with her former Bears head coach, the legendary Digit Murphy, who recently founded the United Women’s Lacrosse League (UWLX) and was named head coach of the first women’s professional ice hockey team in China. “It is exciting to have everything kind of come full circle,” Moore says.

Now if you ask a young female hockey player what she wants to be when she grows up, she can confidently reply: “I want to be in the NWHL.” While that wasn’t an option for Moore, she’s thrilled at the turn her career has taken. “It’s awesome for women’s sports that these roles exist right now. It’s incredibly empowering to have a hand in the future of our sport.”