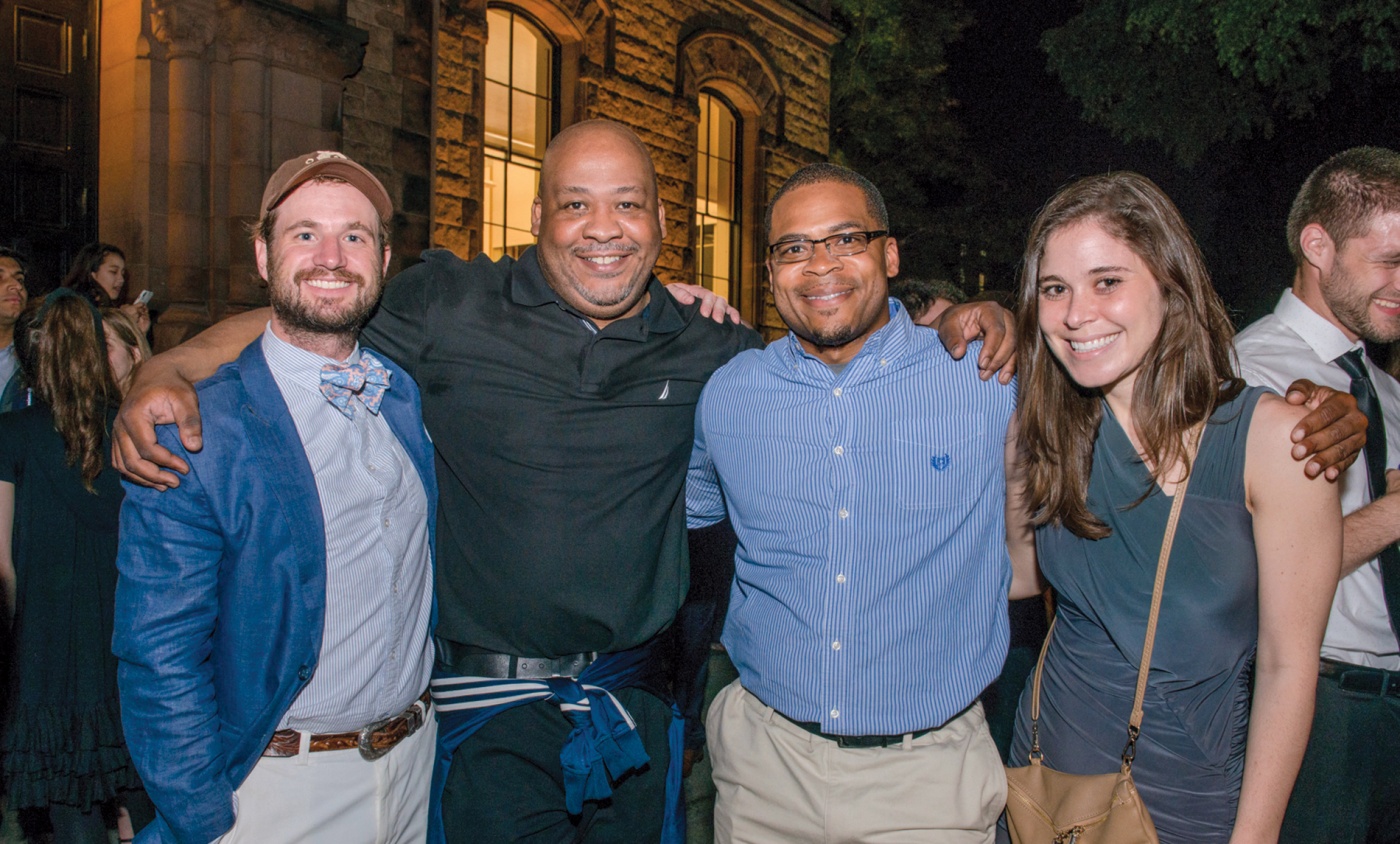 “That’s so Brown!” exclaimed a fellow alum on Thayer Street, when she asked Scott Poulson-Bryan to explain his Reunion Weekend name tag, which read: “’88/’08.”
The backstory: Poulson-Bryant arrived as a freshman in 1984 with literary ambitions inspired by James Baldwin and Joan Didion. His writing career got a jump-start three years later when he took an internship at New York City’s famed weekly, The Village Voice. When he returned to Brown, he was called away yet again by a full-time offer at the Voice that he simply could not decline. He was six courses shy of graduating.
In the years following his Voice  gig, he went on to write for Spin, Rolling Stone, Ebony, and the New York Times. He met Stevie Wonder. He teamed with the legendary music mogul Quincy Jones to co-found the magazine Vibe. He interviewed Prince, Janet Jackson, Lenny Kravitz, Usher, Will Smith, Ice Cube, Eminem, and Beyoncé. He published Hung: A Meditation on the Measure of Black Men in America, which The New York Times called  “thought-provoking,” and won awards for his writing about the rapper/producer Sean “Puff Daddy” Combs and hip-hop legends De La Soul.
Then, in the mid-2000s, after 17 years in music journalism, he decided to go back to school.
Poulson-Bryant’s second stint on College Hill, which he dubbed “Brown 2.0,” was covered by The Brown Daily Herald in the fall of 2007, with the headline “39-Year-Old Writer Returns to Hit The Books.” Said he in the story: “I tend to be a finisher, and this was one part of my life that I hadn’t yet closed.”
In classrooms, he was surrounded by students twenty years his junior; sometimes, he was even older than the professors. “I would get looks like,  ‘Who is this guy? Is he someone’s dad?” he says. After graduation, he went on to get a PhD in American Studies at Harvard with a dissertation titled Everybody is a Star: Uplift, Citizenship, and the Cross-Racial Politics of 1970s U.S. Popular Culture. In 2016, he was hired as an assistant professor of English by Fordham University in New York, where he currently teaches.
And so when Poulson-Bryant returned for Commencement Weekend 2018, it was, in a sense, both his thirtieth and tenth reunion. On Facebook, he posted a selfie wearing a Brown t-shirt, and, in another post, wrote, “It’s quite nice to be back where I was young. And then old. And then young again.” Many of his Class of ’88 peers were parents, and one had a child enrolled at Brown, while his ’08 friends were mostly single and talking about buying their first houses or starting new jobs. Poulson-Bryant speaks lovingly about what the school meant to him at two distinct points in his life.  Brown “legitimately opened the world to me” when he arrived here as a teen from Long Island in the 1980s, he said. “Brown is like living in New York and riding the subway….you cannot help but brush up against people who live differently than you, speak differently than you, eat [and] worship differently than you.” He also noted how, during his second stint, courses he took with Africana Studies professor Tricia Rose and on the Harlem Renaissance “literally opened my eyes to new ways of being able to write about blackness, about culture, and about America.”
And then, in May of 2008, it was time to finally graduate. Looking back on pictures from that day, Poulson-Bryant says he looks “dumbstruck.” That day, while hugging people, shaking hands, crying, and introducing people to his parents, he says he was flooded with campus memories from both the 1980s and the previous year. “It was like...an 8-millimeter home movie running through my brain, the whole day,” he says.

Reader Responses to Two Reunions in One