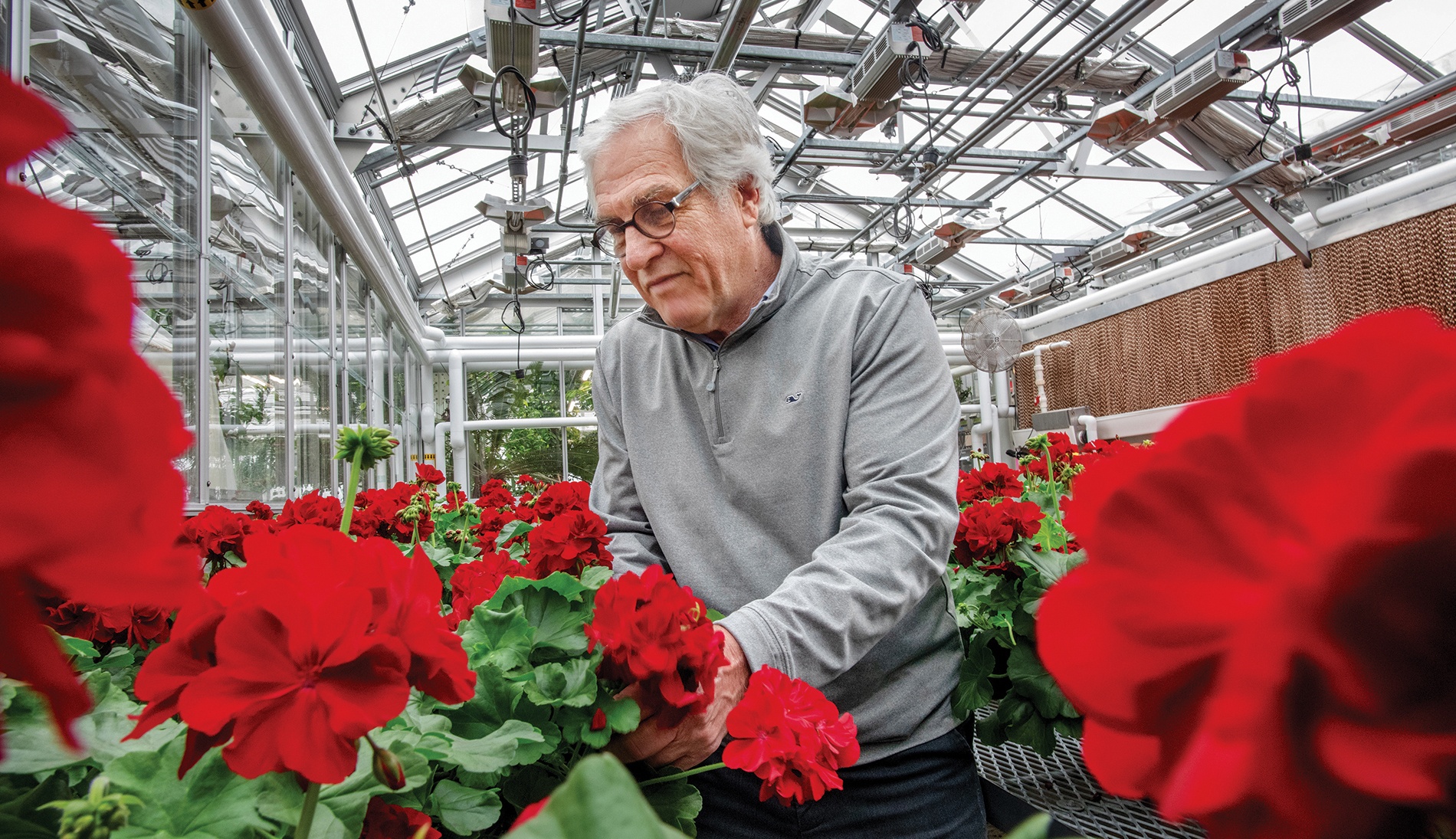 Fred’s Reds
From the greenhouse to the Green

In the spring of 1993, the campus grounds supervisor came to Fred Jackson ’17 PhD with a request: He wanted to store geraniums in the greenhouse Jackson had been recently hired to run. The supervisor had purchased hundreds of flowers to adorn the commencement ceremony stages. Jackson had another idea.

With his background in ornamental horticulture, Jackson thought he could do a better job and keep the work within Brown while he was at it. “Hey, what if I grow these things for you? For grounds and commencement?” Jackson recalls asking the man.

Tucked atop 85 Waterman Street is an anthophile’s dream. Past the airlock, the humid air is thick with sweet blooms and warm leaves. Three of the rooftop greenhouses are filled wall-to-wall with rows and rows of red, purple, white, orange, and pink. Jackson says there are over a thousand four-inch geraniums and, bound for the commencement stages, a couple hundred large geraniums. After years of growing a traditional red geranium, this year Jackson is watering a new, deep red variety. “What I’m excited about, I switched gears and I went to this variety called Calliope,” Jackson says, pushing his round glasses up his nose with the back of his hand. “They’re profuse bloomers. The old variety I had was you’d have one or two little flowers, and it just wasn’t a nice show. This is a big show.”

Jackson grows the Commencement flowers throughout March and April, when fewer researchers use the greenhouses for projects. He starts the large geraniums from cuttings in the middle of March and the smaller ones in early April. Despite the high-tech look of the greenhouses, Jackson still has to water the Commencement flowers by hand. “You can’t have it automatic because you don’t want to mess the blooms up,” he says. “It’s a pride thing.” Jackson knows his plants well. In 2017, Jackson completed his PhD in the Department of Molecular Pharmacology and Physiology at Brown, researching the medicinal plant Mondia whitei, known for its aphrodisiac and antidepressant qualities.

Jackson’s symbiosis with the grounds crew remains strong. “We met, decided what flowers they wanted,” Jackson says. “It’s custom-ordered.” He can orchestrate the entire growing process right on campus: “I like the fact that we can control our own everything, everything’s right in house.”

A week before commencement, in a multi-day operation, the grounds crew plant the campus flower beds with Jackson’s other annuals: marigolds, ageratum, red and purple salvias, New Guinea impatiens, dusty miller, and angelonias.

In late May, the flowers are cleared out and the University greenhouses open up again for summer research. “Once they leave,” Jackson says, “that’s it.”