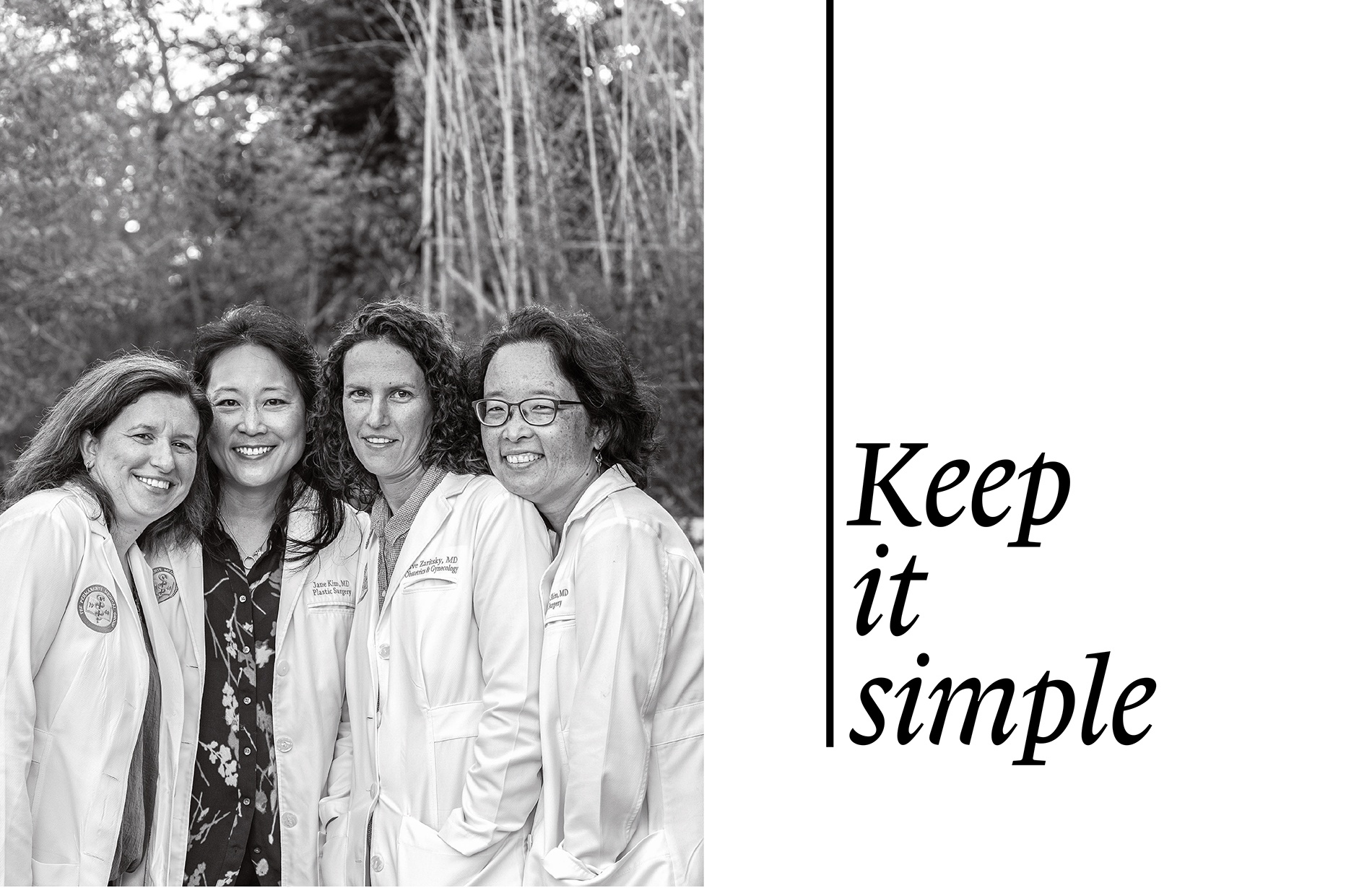 A breast cancer diagnosis is scary and can be complicated, requiring visits to multiple specialists. Four Brown alums—two cancer surgeons, a plastic surgeon, and a gynecologist—put multidisciplinary thinking into action with an integrated breast care center that lets the patient stay in one place.

Dr. Veronica Shim ’95 MD, a breast surgeon and oncologist, is feeling a little frantic. Two weeks before she meets with the BAM, her sister discovered a lump in her breast. She had a mammogram and ultrasound yesterday and Shim is anxiously awaiting the results. At age 49, Shim explains, her sister is at an age when a solid mass viewed on imaging “is cancer until proven otherwise.” Shim, dressed for late May in the San Francisco Bay Area in a hot pink midi dress with fashionable heavy black eyeglass frames, is particularly agitated because it took two weeks for her sister just to get the appointment—and will take another week for the biopsy. Exasperated, Shim told her sister: “God, if you were here, you’d have gotten a mammogram, ultrasound, and biopsy all in the same day!” She adds now: “If she wanted to, she could have seen a specialist here too, all in one package!”

In 2002, Shim founded the Kaiser Permanente Breast Care Center in downtown Oakland, California, to provide just this type of care: an integrated service provider giving patients a “one-stop shop” for all their breast cancer needs. Shim is the center’s director, and her team includes three fellow Brown alums: Dr. Elizabeth Cureton ’95, the center’s other dedicated breast cancer surgeon; Dr. Jane H. Kim ’92, a plastic surgeon who did her residency with Brown’s Alpert Medical School in 2003; and Dr. Eve Zaritsky ’95, an OB/GYN who is a part of the center’s Hereditary Risk Cancer Clinic, following up on the connection between breast and ovarian cancers for women with certain genetic profiles. As Zaritsky likes to explain: “They do the top half, I do the bottom.”

The care this team provides is part of a trend in coordinated care. Breast cancer treatment often requires patients to see surgeons, pathologists, primary care physicians, medical and radiation oncologists, and more. Traditionally, it has been the patient’s responsibility to identify providers, make appointments, and follow up on each doctor’s recommendation, often traveling to multiple facilities over extended periods of time while doing battle with insurance companies.

With coordinated care, the doctors share this burden with her. At the Breast Care Center, Shim and her team coordinate the treatment among themselves and most of the services are provided in one location. “The patient sits in an exam room and the doctors rotate through, providing her care,” Shim says. 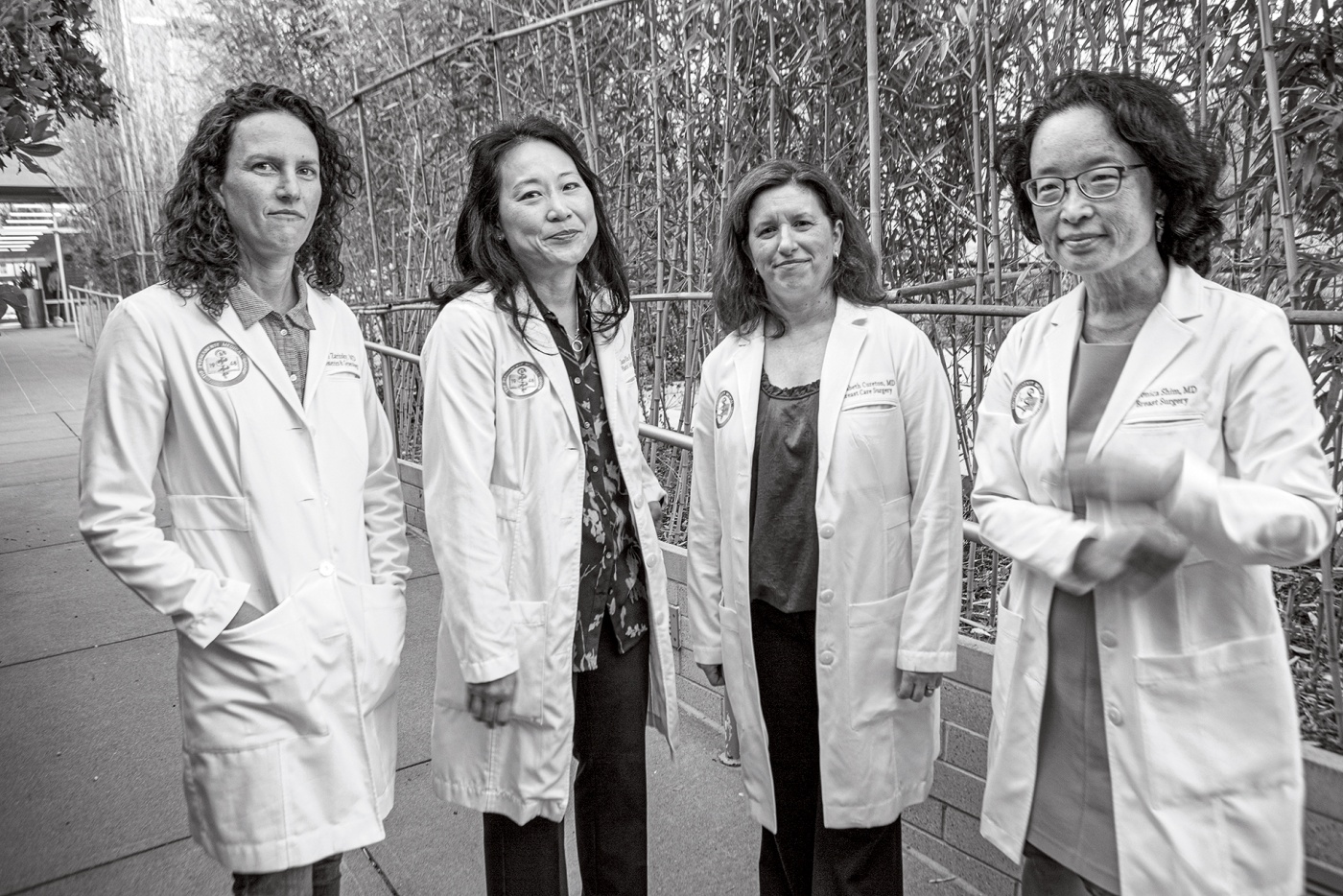 While all patients are unique, the doctors say, when they first arrive at the center they inevitably share one common trait: fear of death. Many know friends or family, particularly of an older generation, who died of breast cancer. For Dr. Shim, it was her aunt who died in the 1980s. Shim cites the loss as one of the events that influenced her decision to go into breast care. In 2017, more than 40,000 women died of breast cancer in the U.S., while 316,120 were newly diagnosed. Yet it is one of the great victories in the fight against cancer that over the last 30 years, the rate of women who survive breast cancer has risen by almost 40 percent.

“When I meet my breast cancer patients, what I love is the fact that they do well,” says Shim, who learned English at age 12 by watching soap operas on TV after emigrating from Seoul, Korea. She still speaks with a pronounced accent. “Most of them, their outcome is good. They will live a long time after the surgery,” Shim adds, drawing out her words for effect.

The Surgeons
Cureton wears a freshly pressed white lab coat with “Elizabeth Cureton, MD, Breast Care Surgery” embroidered in blue on her left chest. The decline in mortality from breast cancer has been attributed to both improvements in treatment and early detection. The vast majority—approximately 80 percent—of women in the U.S. who are diagnosed with breast cancer today will live, even though the incidence of breast cancer has actually increased since the 1970s. Most women who have breast cancer will have surgery. But she believes one of the most important advances has been learning that breast cancer is not just a surgical disease. Cureton, a soft-spoken woman with sincere brown eyes and an awkward smile, spends a good deal of her time outside of the operating room, discussing various treatment options with her patients. “Sometimes that means less treatment. Sometimes it means different and more precise treatment.” For example, trying chemotherapy rather than surgery, a lumpectomy (only cancerous tissue, plus a rim of normal tissue, is removed) instead of a mastectomy (removal of the entire breast) or the removal of one breast in which cancer has been identified instead of contralateral prophylactic mastectomy (the removal of a healthy breast when the other has cancer). When seeing patients at risk for developing breast cancer, she will discuss such preventative options as medication that blocks estrogen and lifestyle modifications such as weight loss.

As an undergraduate at Brown, Cureton worked with infants exposed to HIV at the Family AIDS Center for Treatment Support (FACTS) in Providence, and after graduation she worked at an HIV community center in Boston. It was while observing doctors treating the center’s members at a nearby hospital that Cureton—who briefly considered a career playing the oboe—decided on a career in medicine, wanting to take a hands-on approach to care with an eye to “big-picture prevention.” It is a sentiment repeated by each of the doctors, who view their roles as being as much a part of solving larger public health challenges as providing immediate patient care.

Cureton also emphasizes the importance of “increased surveillance” in breast cancer risk reduction. But a decade ago, the ability to perform such surveillance was undermined, as journalist Florence Williams reports in her award-winning 2012 book, Breasts: a Natural and Unnatural History—by the 2009 U.S. Preventive Services Task Force. Best known for its recommendations to defer and lessen the use of mammograms, the Task Force also recommended that doctors no longer perform breast exams during annual check-ups, nor teach women how to perform breast self-examination. “It’s a well-recognized fact that most breast cancers are found by women themselves, not by mammograms,” she writes. In an interview with the BAM, Williams explains the problem is not the exam, but rather that both women and doctors have been inadequately trained to perform them correctly and a healthcare system that fails to provide doctors with the necessary time to appropriately provide the service.

Dr. Shim also emphasizes that the most important advice she can give any woman is to know her own body. “Y