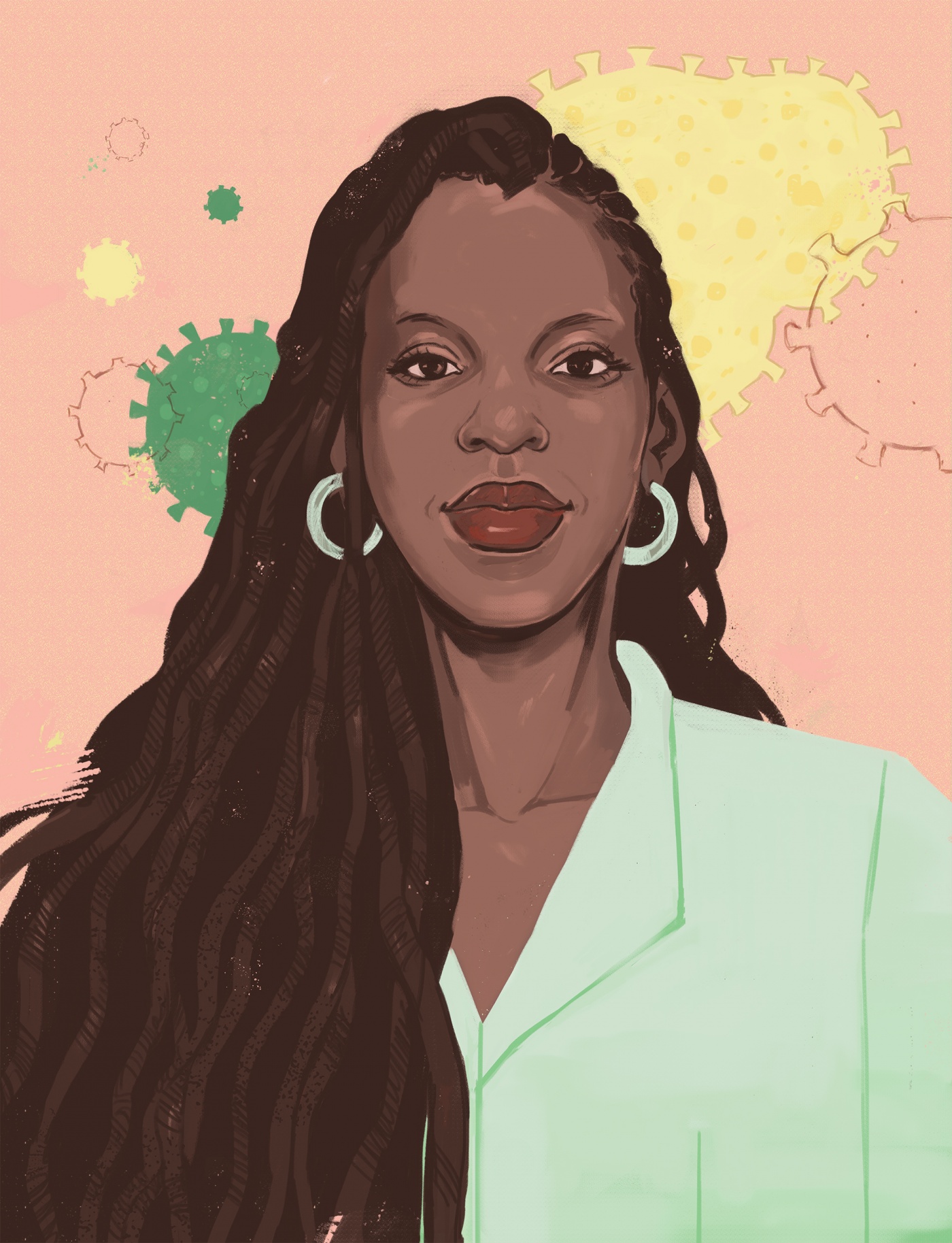 Rhode Island Department of Health Director Nicole Alexander-Scott ’11 MPH has been a constant, straight-talking, and unwavering presence alongside Governor Gina Raimondo in the state’s daily, televised COVID-19 updates. Local public radio dubbed her a “rock star.” With a deep background in infectious diseases and government policy, Alexander-Scott was as prepared as anyone for the novel coronavirus pandemic that suddenly upended American life in March. Yet for her, as for just about everyone else on the front lines of the response, there was a learning curve.

“Emergency preparedness is a core function of public health, so it all felt normal from that standpoint. We’d been familiar with pandemics. We’d had memories and hours of tireless work that oc-

curred during the H1N1 pandemic and Ebola,” she says. What shifted her view of what the state faced was an evolving understanding that people without symptoms were transmitting the virus, which Rhode Island officials learned from watching super-spreading events abroad and elsewhere in the United States.

“Because it shifted, we had to be dynamic and shift,” she says. “And that’s really part of the entire element of this—staying close to the science and then being able to be adaptable, make the adjustment, and be able to communicate it.”

Alexander-Scott has a career’s worth of relevant experience. At Brown, the Brooklyn native studied both of the fields she’s now leading in, completing a four-year combined fellowship in adult and pediatric infectious diseases—a subspecialty that drew her interest, she says, because it focuses on her patients’ whole backgrounds, not just their narrow health concerns. She then earned a master’s degree in public health, which broadened her professional focus to cover entire communities, with a particular emphasis on the societal factors that make some more vulnerable to illness.

Before joining state government, Alexander-Scott led an effort in Rhode Island to make prenatal testing for HIV routine—an experience, she later told the Providence Journal, that really opened her eyes to how a doctor could use clinical experience to make a broader difference. “That hooked me,” she told the paper.

Good communication with the public is something that Alexander-Scott had already learned during her five years in the state health director job, in which she’s focused on reducing deeply ingrained health inequities, and it paid off when catastrophe struck.

Prior to the novel coronavirus’s arrival, one of her major projects was Rhode Island’s Health Equity Zone Initiative, in which residents, educators, business leaders, health professionals, and transportation experts jointly address the whole range of concerns in their neighborhoods, from educational disparities to lack of access to fresh fruits and vegetables.

An example of this grassroots approach is how the state set up testing for the virus. She said health officials knew they had to expand testing into the communities where many people worked on the front lines, but learned through collaboration that people without cars needed walk-up sites and options near their jobs instead of across town.

As COVID-19 spread and statistics started to show that the pandemic was taking a disproportionate toll on low-income and minority communities, Alexander-Scott admits she was not surprised.

“I definitely was not pleased with that,” she says, “but it exposes what we have known.” In one of the daily coronavirus updates in June, she said it was up to public health officials to “call out structural inequities such as racism, institutional racism, and other components that contribute to the different outcomes that we are seeing.” Everyone, she said, should “think through what each of us can do to address that.”

Reader Responses to Ready to Pivot