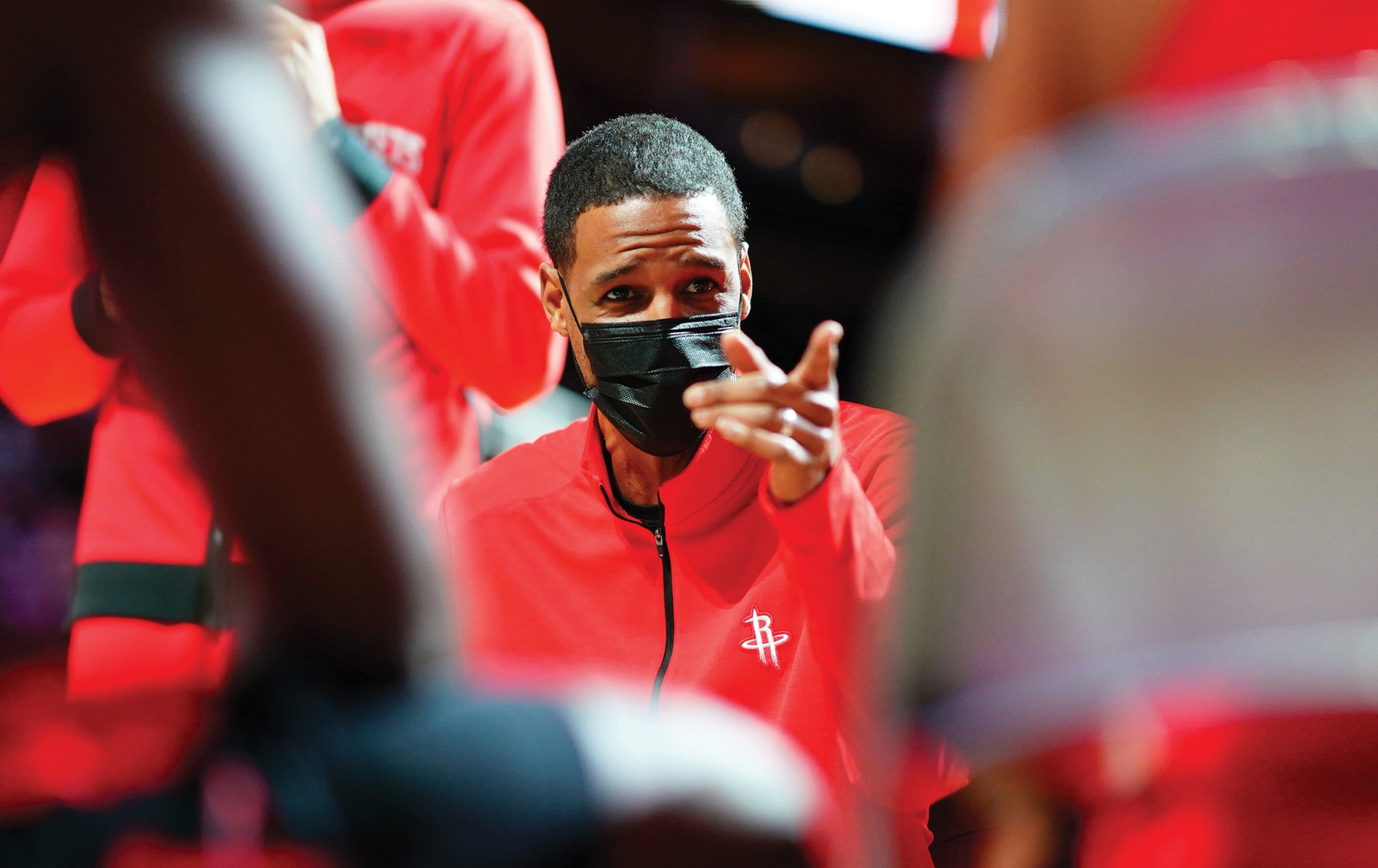 Stephen Silas talks to his Houston Rockets during a January 2 game against the Sacramento Kings.Photo: Cato Cataldo/NBAE
Sports & Recreation

Brown would not boast its first-ever NBA head coach were it not for an assist from fans of an in-state rival.

When Stephen Silas ’96, the rookie head coach of the NBA’s Houston Rockets, first visited College Hill on a recruiting trip back in 1991, he liked the campus, liked the coach, and liked his future teammates.

But the clincher came when Brown played University of Rhode Island at the Pizzitola Sports Center that evening.

“The Pitz was packed!” Silas recalled. “I was like, ‘Aww man, this is so exciting! This is the real college basketball experience!’

“I didn’t put two and two together until later,” Silas said. The stands were packed not for Brown but for URI. The URI fans were raucous because their team was en route to an 88-58 win.

Silas laughs at the memory. He has a warm, easy sense of humor—which is something he’s needed every ounce of in his new position.

Silas got the Rockets job October 30, 2020. One week later, word leaked that the Rockets’ superstar—former MVP James Harden—had demanded a trade. And because Harden wanted out, the team’s other star, Russell Westbrook, wanted out, too. Harden and Westbrook were both eventually traded, which left Silas with a thin roster.

So what’s it like to get your dream job only to have your best players demand trades? “Let’s just say it wasn’t awesome,” Silas deadpans.

If Silas’s last name sounds familiar, it’s because his dad is NBA royalty. A two-time NBA All-Star, Paul Silas won three NBA championships (two up the road in Boston) and later served as head coach of the Clippers, Hornets, and Cavaliers.

Silas’s big break came in 1999 when his father offered him a rather unglamorous position as an advance scout for the Hornets. Odd as it sounds, Silas says his Brown education had prepared him perfectly.

“The thing about Brown is nobody is going to hold your hand,” says Silas. “It’s the same with NBA scouts. Reports have to be sent in on time, they cannot be wrong, and then you’re off to the next city to do it all over again.”

Success as a scout eventually led to success as an NBA assistant coach. Three players Silas coached during their rookie years: LeBron James, Stephen Curry, and Luka Doncic. It wasn’t long before Silas’s work with budding stars put him on short lists for head-coaching jobs.

Despite the rough start in Houston, Silas’s former coach at Brown, Frank “Happy” Dobbs, remains confident in his protégé. “Silas has always known the game,” Dobbs says, “but what makes him unique is an ability to explain things in ways that click with players.”

“Stephen is just very easy to get along with,” says Dobbs. “And he’s also easy to listen to because everything he says is just so well thought out.”

In today’s NBA, “easy to get along with” is practically a job requirement. Knowing how to coach with persuasion instead of coercion is a must, and Silas says this is another skill honed at Brown.

“You’re dealing with different viewpoints, with people from different backgrounds, and you’ve got to meld it all together,” he says. “That is Brown.”