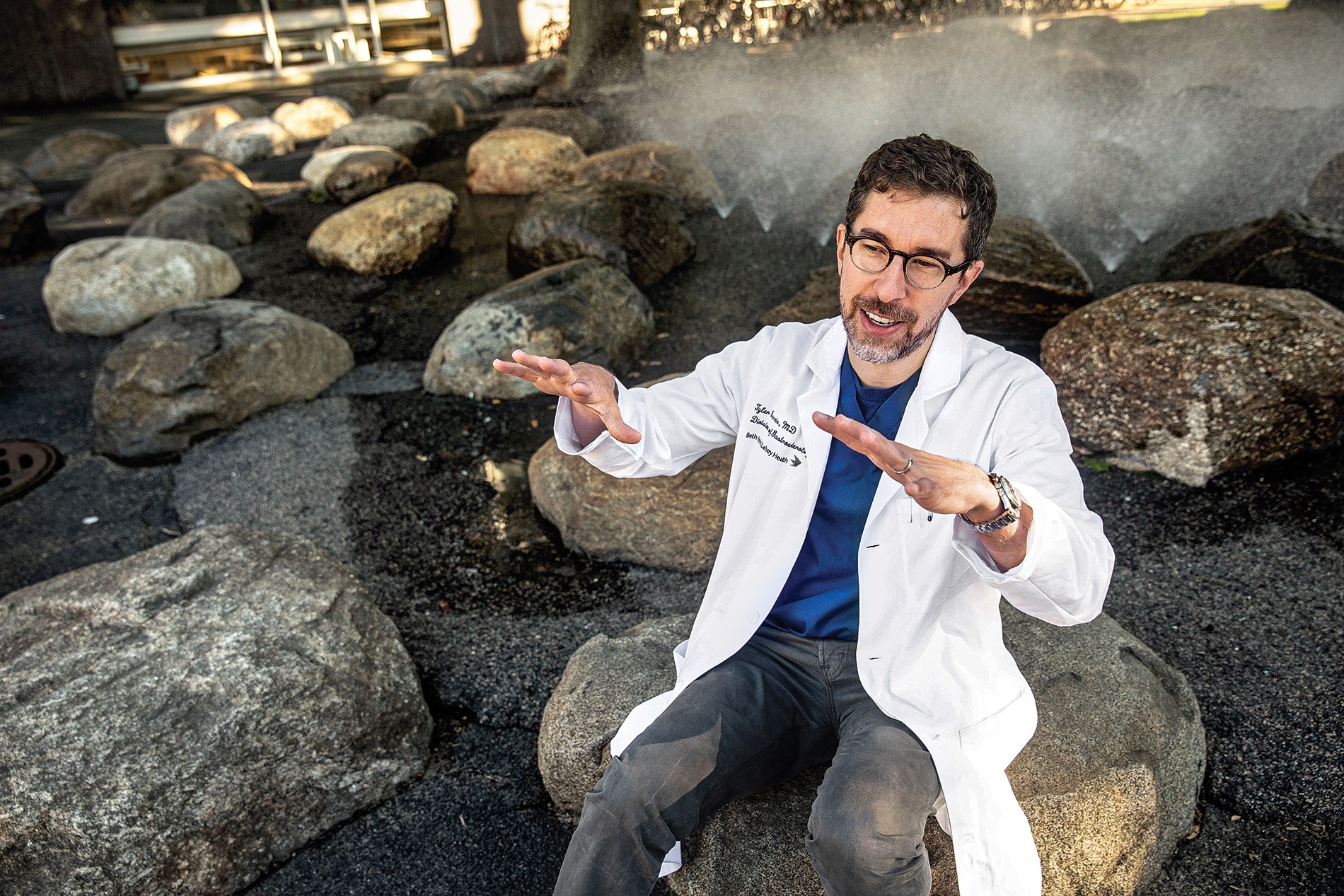 When Tyler Berzin ’99, ’03 MD, was starting out as a gastroenterologist at Beth Israel Deaconess Medical Center in Boston, he encountered a woman in her mid-50s suffering from rectal bleeding who turned out to have advanced colon cancer. Only a few years earlier, she had had a colonoscopy that showed she was clear of any of the polyps that grow into the disease. “I could not help but wonder if the precancerous polyps hadn’t been missed,” Berzin says. The experience led him to ask whether doctors could get help from artificial intelligence to better identify colon cancer—and ultimately, to a collaboration with another Brown alum, Xiao (Sophie) Xiao ’07 ScM, ’11 PhD, a professor of mathematics at Southwest University of Finance and Economics in Chengdu, China.

Colon cancer is the third leading cause of cancer-related deaths in the United States, but can be completely prevented by removing precancerous cells early enough. Unfortunately, the most dangerous polyps are almost completely flat. “They are like moss on a rock, camouflaged into the surrounding tissue,” Berzin says. He worked with scientists from MIT and Harvard to train a deep-learning AI to identify polyps, but even computer vision had difficulty spotting them in real time. Eventually, Berzin gave up, publishing a paper in 2014 in hopes someone else might have better luck.

At the time, Xiao had recently returned to China after a stint creating mathematical financial models for Goldman Sachs on Wall Street. Then a doctor friend showed her Berzin’s paper and asked if she could help. Without any background in medicine or artificial intelligence, Xiao approached the problem as one of mathematical computation. “People think of deep learning as a brain that can learn by itself, but it’s really just a mathematical function with many parameters,” she says. By tweaking the function, she was able to dramatically improve the algorithm’s ability to identify the two-dimensional structures.

While visiting Providence in 2017, she sent a message to Berzin offering to show him her results. “I was blown away,” Berzin says. “She was able to detect some of the most subtle polyps in real time exactly as we’d hoped.” Together they collaborated on a series of clinical trials showing the technology increased detection by 20 to 30 percent—and studies show every 1 percent improvement in detection decreases patients’ risk of colon cancer by 3 percent. Xiao cofounded a company, Wision (a portmanteau of “wise vision”), to develop the technology for other medical applications. Beyond colon cancer, Berzin says, machine vision could be useful in a broad range of medical fields, including dermatology, ophthalmology, and radiology. “It can unlock powerful patterns of data that are present in visual fields we interact with every day in medicine, but that we have not been able to unlock with our own eyes.”