The Human Trafficking Crisis
Students, faculty, and alums are finding innovative ways to combat one of the greatest human-rights abuses of our time. 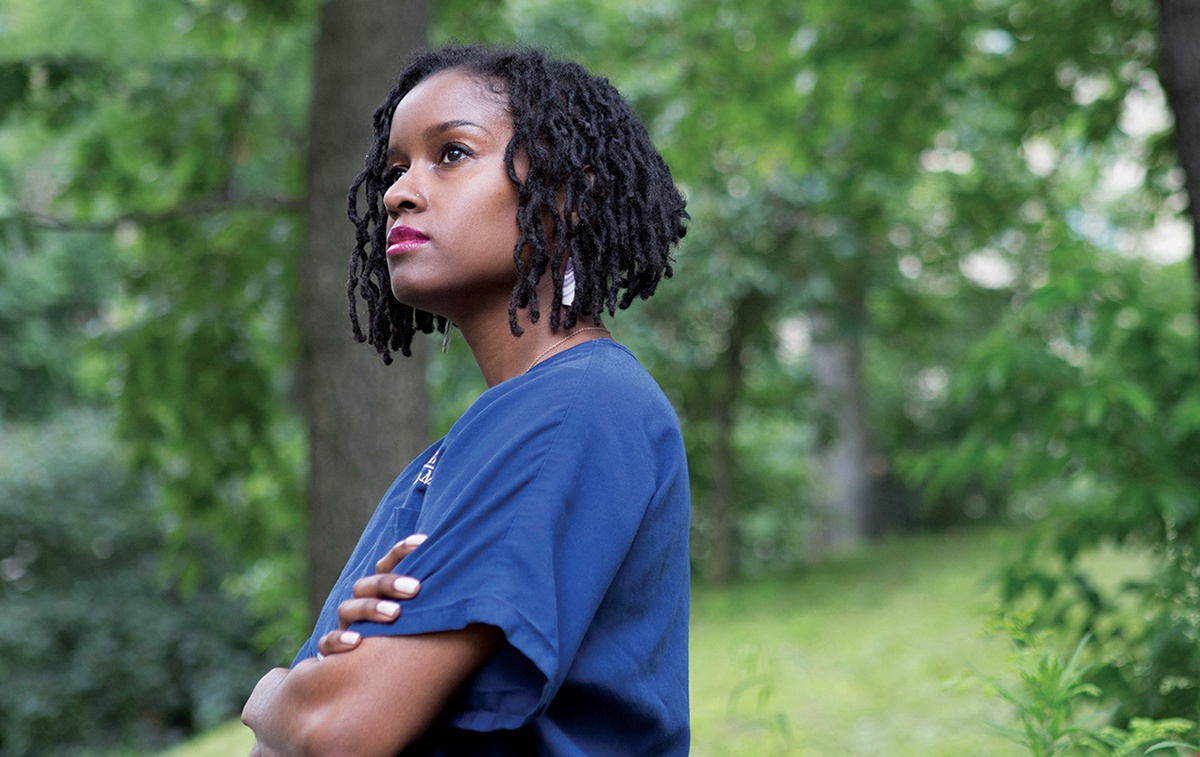 Makini Chisolm-Straker ’05 MD’09 is one of the founders of HEAL, which trains health providers to identify and assistant patients who may be trafficking victims. Photo: Jayne Wexler

According to the U.N.’s International Labor Organization, over 40 million people worldwide are victims of human trafficking, forced into providing labor and sex. The world’s fastest growing crime, trafficking generates billions in profit each year for its perpetrators—yet it remains a largely unseen enterprise. Trafficked humans might work in the factories that produce your favorite shoes or pick the vegetables that show up in your produce aisle. As the number of victims grows, Brown students, faculty, and alumni are tackling this invisible crime in unique ways.

TRAINING DOCS TO SPOT CLUES
A man named Rafi enters an emergency room with a deep cut in his arm. He gives the clerk his cousin’s address, tells her that he doesn’t have any health insurance and says he’s never been to a hospital before. His arm is anesthetized, he gets stitches, and he walks out with some gauze, a roll of tape, and ointment.

That’s the scenario that physician Susie Baldwin laid out in a presentation last year for TEDMED, the health and medicine version of the TED conference. Yes, Rafi was properly treated for his injury. But, Baldwin continued, doctors failed to see what was really happening to Rafi, who had come to the U.S. for a construction job and was told that, despite working 19-hour days, he wouldn’t get paid until he cleared an $8,000 debt he didn’t even know he owed.

Hospitals are a prime area to connect trafficking victims to help. Studies have found that 28-50 percent of victims will encounter a health provider while being trafficked. But, according to Makini Chisolm-Straker ’05 MD ’09, an assistant professor at New York’s Icahn School of Medicine at Mount Sinai, clinicians are traditionally ill-equipped to identify and assist victims.

That’s why, in 2013, Chisolm-Straker, Baldwin and four other health professionals created HEAL Trafficking to help colleagues do so. The group has since become a national network of over 1,500 health care providers.

When Chisolm-Straker helped found the organization, she says, the few clinicians familiar with trafficking “only knew from 20/20 or Lifetime movies like Taken.” Doctors “just had no idea” they were treating victims, she says.

Stemming trafficking in the U.S.— particularly pervasive in big cities with booming economies like New York City or Los Angeles—is often seen as something that can be done solely through law enforcement. But, Chisolm-Straker says, past public health campaigns have played a major role in addressing issues that legislation alone could not fix.

What’s more, she says, HEAL’s toolkit for health pros on how to assist trafficking victims has been downloaded more than 1,500 times in 23 countries.

ORGANIZING IN THE FIELDS
Fifteen years ago, the tomato fields of Immokalee, Florida, were blighted with human trafficking. Farm workers were forced to toil in extreme heat with no breaks. Pay was often withheld and complainers were assaulted. In one case, hundreds of laborers were held by armed guards and forced to work six days a week, threatened with having their tongues cut out if they told anyone.

Thanks to the Coalition of Immokalee Workers, those fields are now some of the best in America for farm laborers.

Founded in 1993 by Laura Germino ’84, Greg Asbed ’85, and a group of tomato growers, the coalition has discovered and prosecuted farms that relied on forced labor throughout the southeast. They have assisted in the freeing of over 1,200 workers who had been held by their employer against their will.

According to Germino, forced labor has been virtually eliminated in Florida thanks to the coalition. “This is after 300 years in the southeast of the uninterrupted occurrence of forced labor in the agricultural industry,” she says.

Now, through its Fair Food Program, the coalition ensures that using exploitative labor is a money-losing endeavor for growers not just in Florida but across the east coast. Farms participating in the program must provide workers with humane wages, rest breaks, and shade tents to escape the sun, and must follow a code of conduct that forbids verbal and sexual assault by crew leaders.

The coalition has gotten corporations such as Subway, Taco Bell, and McDonald’s to buy only from farms certified by the program. After the coalition heard that sexual violence was endemic to the Wendy’s supply chain, they organized a massive fast in March to pressure the fast-food giant into becoming certified.

As of 2017, the program has participating tomato farms in seven states and has branched out to strawberry and pepper fields in Florida. “When you realize that this industry went from one of the most regressive to one of the most progressive in the span of a decade—that can happen anywhere,” says Germino. “The key is enforcement with teeth.”

TRYING TO LEGISLATE TRANSPARENCY
In April 2017, Brown students Julie Centre ’19 and Dylan Elliott-Hart ’19 dressed up and visited the Rhode Island State House. They were ready to testify for “The Rhode Island Transparency in Supply Chains Act,” the anti-human trafficking bill they had spent the semester crafting as members of student group unBUYnd.

The bill would force companies making more than $100 million to disclose on their websites how they ensure that their products are not made with forced labor. Rhode Islanders could then decide where to shop based on the information.

According to unBUYnd, Rhode Island has imported $10 billion in goods over the past five years from countries considered at high risk for using forced and child labor.

Federal law prohibits states from importing goods made with such labor. But, according to unBUYnd member Aubrey Calaway ’2o, that legislation has “very little teeth” and companies “almost always can claim ignorance even if sweatshop labor is prolific throughout their supply chain.” Three years ago, a major investigation by the Associated Press found that shrimp peeled in Thailand through forced labor had been sold at American retailers and restaurants.

Like most legislation on its first pass through Rhode Island’s General Assembly, unBUYnd’s bill was ultimately held for further study. Meanwhile, unBUYnd is trying to partner with local businesses and community organizations so it can have more clout when it re-introduces the bill next year with a catchier title: “The Fair Labor Everywhere Act.”

The group hopes the R.I. bill will be passed in five years, with younger members picking up the torch once the founders graduate from Brown. “We’re in this for the long haul to make substantial change,” says Calaway, “and that doesn’t happen overnight.”

Not to sound like an annoying fact checker, but the first sentence of “The Human Trafficking Crisis” (Elms, July/August) claims the International Labour Organization says 40 million people are “victims of human trafficking, forced into providing labor and sex.”

But the ILO number is 25 million for forced labor—and that is a stretch for “human trafficking” because under the ILO definition, about half are people who are not moved (or trafficked) at all. The ILO confusingly has a figure of 40 million in “modern slavery,” reached by adding in 15 million in child marriages. Frankly, all these numbers are pretty suspect.

—Glenn Kessler ’81 The writer is fact checker for the Washington Post.