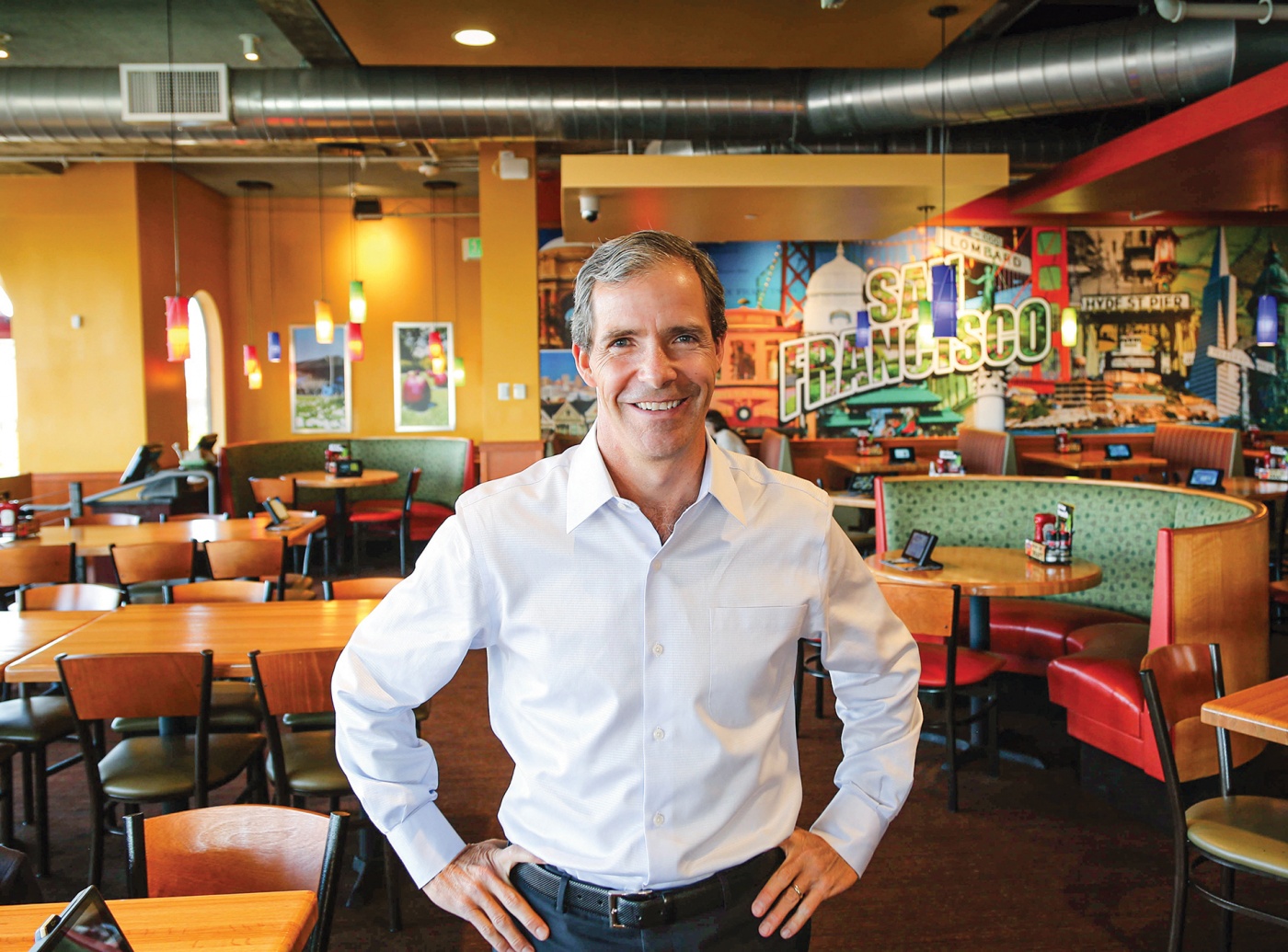 The first job Greg Flynn ’86 took after earning his MBA was in real estate before he turned to chain dining.Photo: Senja Larsen

Greg Flynn ’86 lives and works in San Francisco, and he concedes there’s been a time or two when he thought he might be in the wrong business—specifically periods like the tech bubble of the 1990s, when he found himself surrounded by newly minted millionaires. For Flynn may reside in the capital of the new, digital economy, but his business—franchising chain restaurants—is decidedly old school.

“But then that all blew up and their businesses evaporated, and here I am still hitting singles,” he says. “Ours is a wonderful business if you just keep executing consistently year in and year out.”

Flynn has done that, and then some. The Flynn Restaurant Group is the nation’s largest restaurant franchisee, with 1,245 Applebee’s, Taco Bell, Panera Bread, and Arby’s outlets in 33 states employing nearly 50,000 people and bringing in $2.3 billion in annual revenue. His big idea is that size matters. Flynn’s job isn’t to worry about branding—that’s the chains’ job. It’s “to be the very best operator within the system, but to do it at scale.” His company accounts for more than a quarter of the Applebee’s in the country, and they consistently rank among the chain’s top franchises. That, Flynn says, comes from reinvesting in the restaurants, figuring out best practices, and attracting better employees by offering better training and benefits at lower costs. He calls it a “virtuous cycle.”

Flynn, a Marin County native and history concentrator who holds a master’s in history from Yale and an MBA from Stanford, didn’t always have his eye on this business—or any business in particular. “I never thought about it. I studied entirely what I was interested in at Brown and I’ve encouraged my children (twins Michael and Jamie, both class of ’20, and daughter, Sarah, at Yale) to do the same,” he says. “Employers respect people who excel at whatever their interest is.”

Flynn got his first taste of the restaurant business when he invested in World Wrapps, a chain of wrap outlets started by a Stanford classmate. The venture was successful but taught him as much about what he didn’t want as what he did. “I realized it could be a great industry, but I was playing at literally the riskiest end,” he says. Going with established brands makes it easier to lease space, attract employees and customers, and borrow money, he argues. So “we play in only the biggest brands,” with built-in loyalty and huge marketing budgets.

Another theme underlying Flynn’s low-risk approach is diversification, across companies, concepts—he’s in fast food, fast casual, and casual dining—and regions. Not that the business is risk-free; even established brands make bad calls. Applebee’s had a downturn when it tried to get too fancy, offering hand-cut steaks, small share plates, and a “gastropub” experience, Flynn notes. But when it reverted to what customers found comfortable and familiar, it rebounded.

Arby’s, too, may not be on trend, but it’s got a formula that works. “It turns out there are plenty of people who love large, hot meat sandwiches,” Flynn observes.