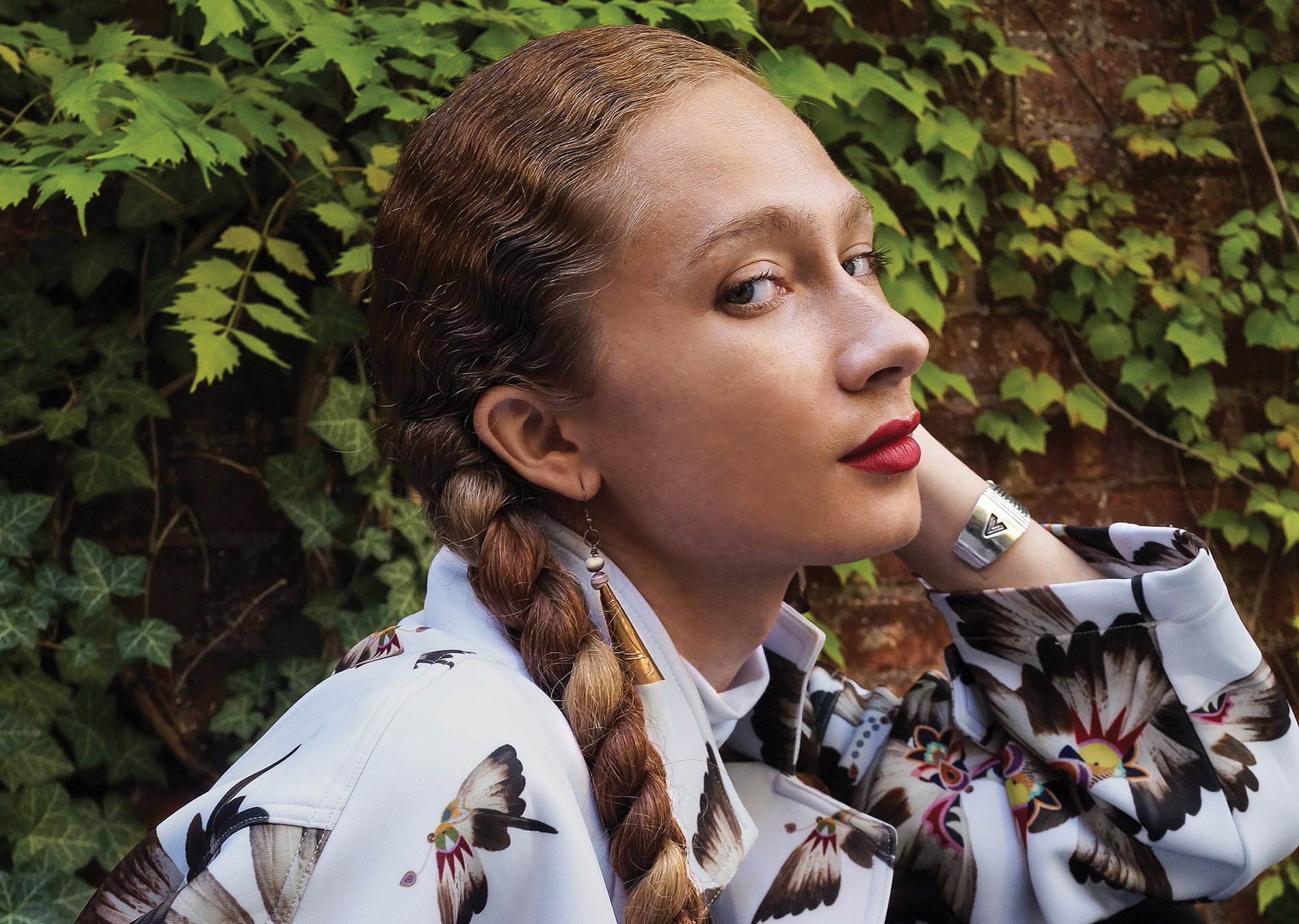 Stepping Up
A Narragansett dancer on life as a dual degree student, documentary star, and tribal activist

Sherenté Mishitashin Harris ’23 is a member of the Narragansett tribe’s storytelling clan and it shows. When Harris—who is Two Spirit, an Indigenous term used to describe someone with a multigender identity, and who uses he, she, and they pronouns—tells a story, their graceful hands gesture, their eyes gaze into the distance, and their voice fills with warmth that draws a listener in.

That poise comes in useful for someone juggling many roles: as a dual degree RISD/Brown concentrator in ethnic studies and painting, as an advocate for the Narragansett tribe, and as a boundary-pushing activist within Indigenous culture. Harris is also an LGBT History Month Icon and the subject of the documentary Being Thunder, which has been featured in nine film festivals since premiering this summer at Inside Out Film Festival in Toronto. New York–based distributor Film Movement will debut Being Thunder in theaters later this year.

The history of Indigenous land, as well as Narragansett language documents in the John Carter Brown Library, drew Harris to Brown. Along with serving as one of seven members of Brown’s Land Acknowledgment Working Group, which is studying the Native roots of College Hill land, Harris’s campus life includes being a member of Decolonization at Brown and queer fraternity Zeta Delta Xi. 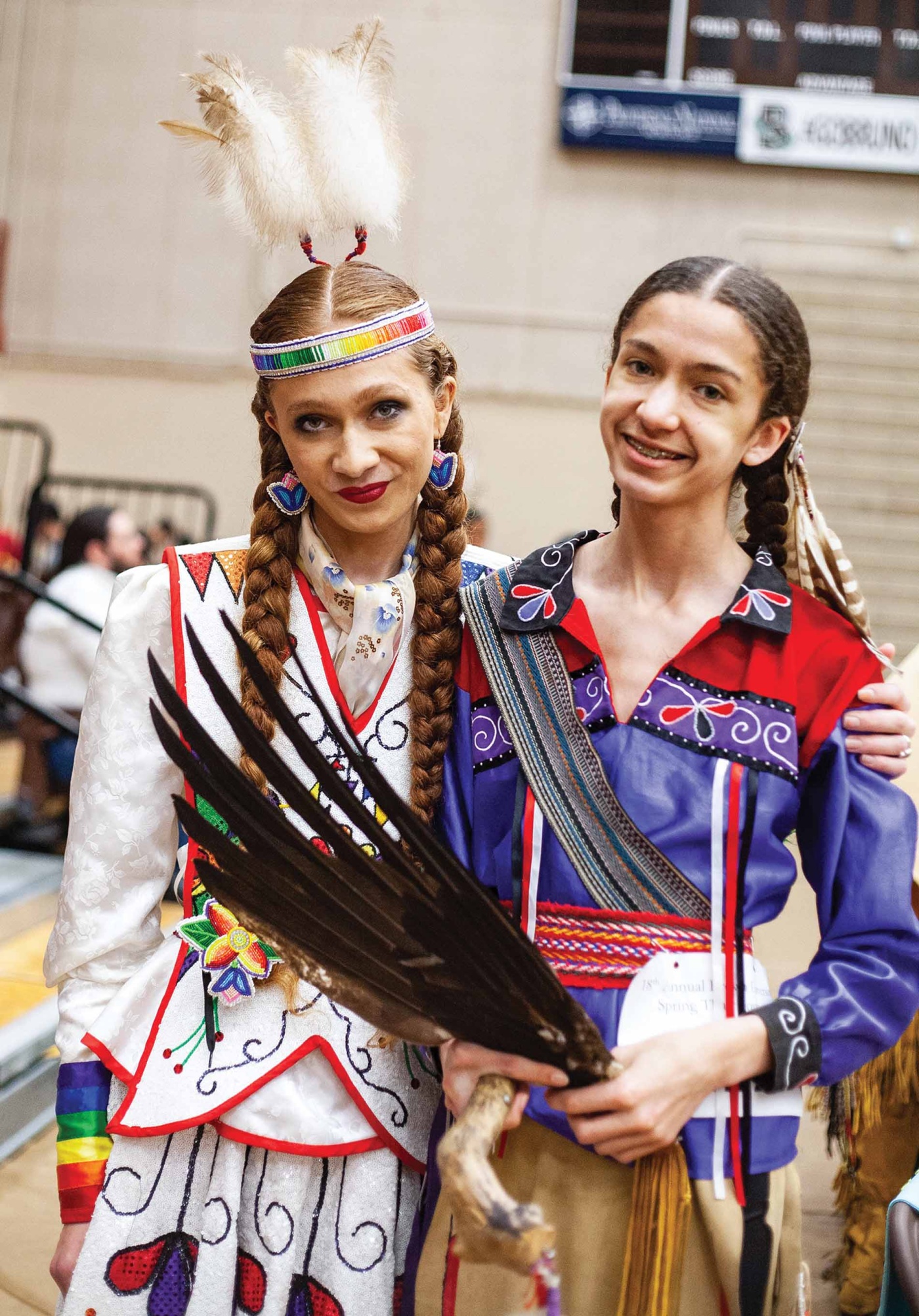 Harris says their Two Spirit identity is intertwined with their Narragansett heritage. Historically, Two Spirit people were part of Indigenous culture, they say—it was white society that passed on discriminatory attitudes. They refer to themselves with the term noh waashpit, which means “he who is effeminate,” and is also the title of one of Harris’s art exhibits. Being Two Spirit is “a rebellion against the imposition of categorization,” they say, and “a critique upon our seeming separateness.”

Being Thunder follows Harris through the ups and downs of their late teens, including their tears at getting into Brown—“it felt like an acceptance for the whole Narragansett tribe”—but focuses primarily on Harris’s experiences performing a traditionally female dance at powwows.

“When people come to powwows, they often think of us doing a reenactment, but we’re not,” says Harris.  “We are simply continuing our traditional ways.” Harris’s parents are both dancers; initially Harris followed their father in performing a male style of dance. But they felt called to the same dance as their mother, the Fancy Shawl, which was developed during the women’s rights movement. It “faced a tremendous backlash” when first introduced, Harris says, but “has since become one of the largest, most popular styles of dance, intertribally, so I see it as a dance of liberation—for me, and my Two Spirit community, as well.”

The documentary chronicles how Harris faced opposition but also garnered support as they forced their community to confront yet another evolution of traditional ways, eventually finding recognition as head dancer at Dartmouth Powwow. The film, says producer Mae Gammino, tells Harris’s story without voyeurism or interpretation.

Elders have told Harris about loved ones who tried, unsuccessfully, to do what Harris has done. Young people message them and say they inspired them. One young Two Spirit person, who began Jingle Dress dancing, messaged Harris to say that they had not been accepted by their community, but felt “empowered” by Harris’s activism. “And now,” says Harris, “I think they have even more followers on Instagram than I do.”

Ultimately, Harris hopes their story will serve as a vehicle “for people to know the name of the Narragansett again.” Even native Rhode Islanders, they say, often “think that Narragansett is just the name of a town. We need to be seen because we were once—and we continue to be—the mighty Narragansett, the most powerful tribe in southern New England. And that legacy cannot die.”