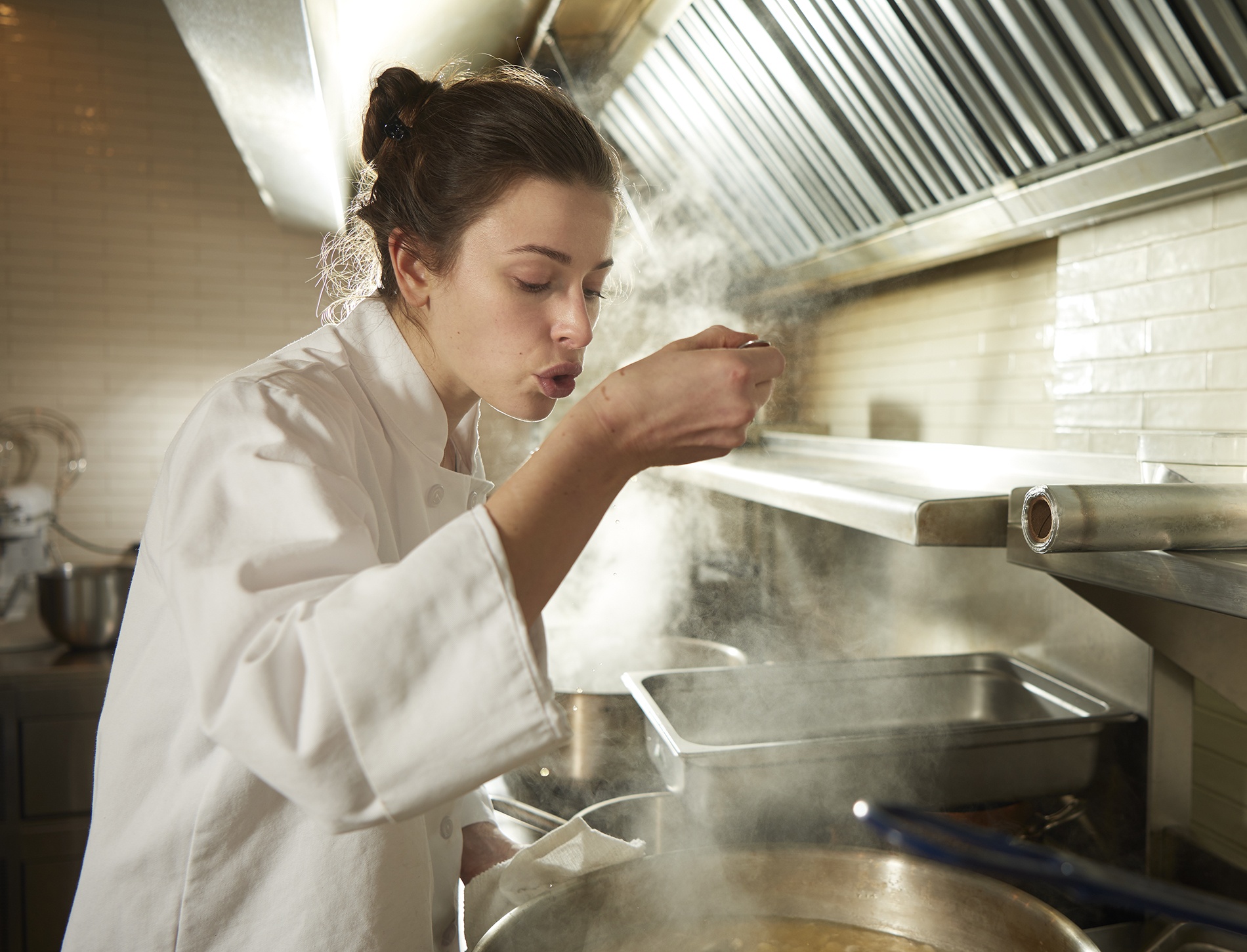 Word of Mouth
There are no recipes at King, in Manhattan’s SoHo. “Everything is verbal in the kitchen,” says Clare de Boer ’12.

You could dine every day at King—a snug, light-filled Manhattan eatery run by executive chef Clare de Boer ’12 and her partners Jessica Shadbolt and Annie Shi—and never eat the same meal twice. That’s because de Boer and her colleagues design a different menu each morning, after checking out what’s fresh from the local greenmarket or fishmonger. Sometimes the offerings depend on the weather. “If it’s chilly, we might put on a braised dish,” says de Boer. “Or if the sun is shining, we know the terrace will be bustling so we put together lots of salads and antipastos.”

King has won wide acclaim since opening at 18 King Street in SoHo three years ago. The trio was on the Forbes 30 Under 30 list for 2019, and de Boer earned a coveted nomination for the James Beard

Rising Star award. The New York Times praised the restaurant for its spin on Italian and southern French cooking, pointing out that “what you really notice is how many little moves they know that can raise a recipe from good to exceptional.” De Boer—whose well-known patrons range from Madonna to Michelle Obama—doesn’t work from formal recipes. “Everything is verbal in the kitchen, which makes it really fun and dynamic,” she says, adding that Sade Zimmerman-Feeley ’13 was recently named head chef. Among King’s recent dishes: Sardinian crisp bread with Mission figs, mint, and ricotta; and sirloin chargrilled over rosemary branches with white coco beans and chanterelle mushrooms. “We try to do as little as possible to bring out the best in the ingredients,” says de Boer. 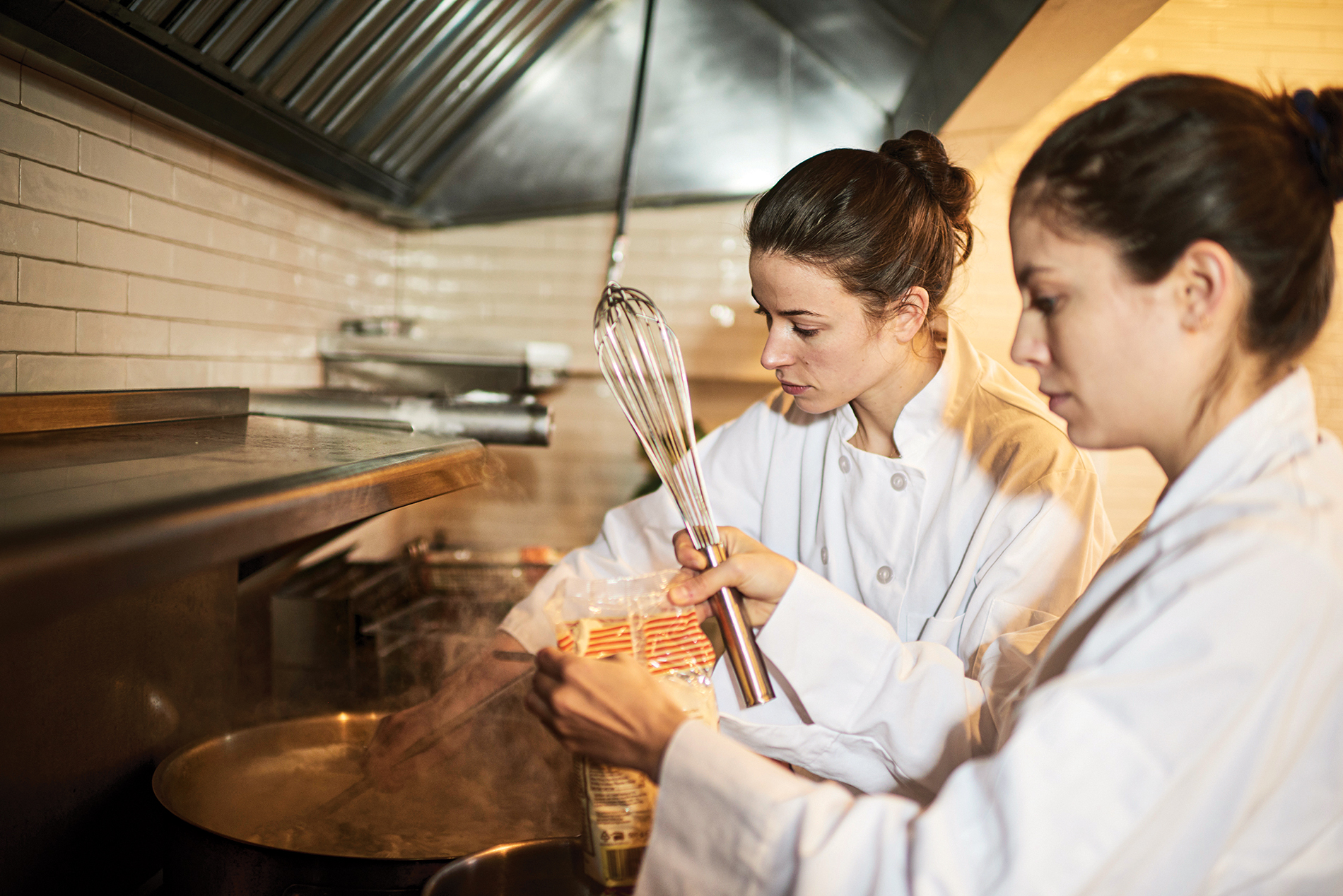 Born in the U.K. but raised in India and the Middle East, de Boer says food was a huge part of her childhood; it was a way to tap into local culture as her family moved from place to place. Yet she never thought much about a culinary career at Brown, where she concentrated in South Asian studies. After graduation, she took a job at Goldman Sachs but felt more at home doing catering on the side. So she quit and enrolled at Ballymaloe Cookery School in Ireland. De Boer befriended Shadbolt as they worked as line cooks at London’s renowned River Café; she later met Shi, who was in finance, and formed a bond over food and wine.

After operating supper clubs in London and New York, they decided to start their own place. Getting off the ground was tricky; the trio was still raising money six months after opening. “We couldn’t actually afford to equip the kitchen when we first opened, so I brought all my pots and pans from home,” says de Boer, who is stunned by King’s swift success. She attributes it to a “laser-clear” vision: an intimate, European-style restaurant with an unassuming approach to dining. “We want it to feel like an extension of our homes,” she adds, “with nothing to distract from the simplicity of the food on the plate.”

Reader Responses to Word of Mouth