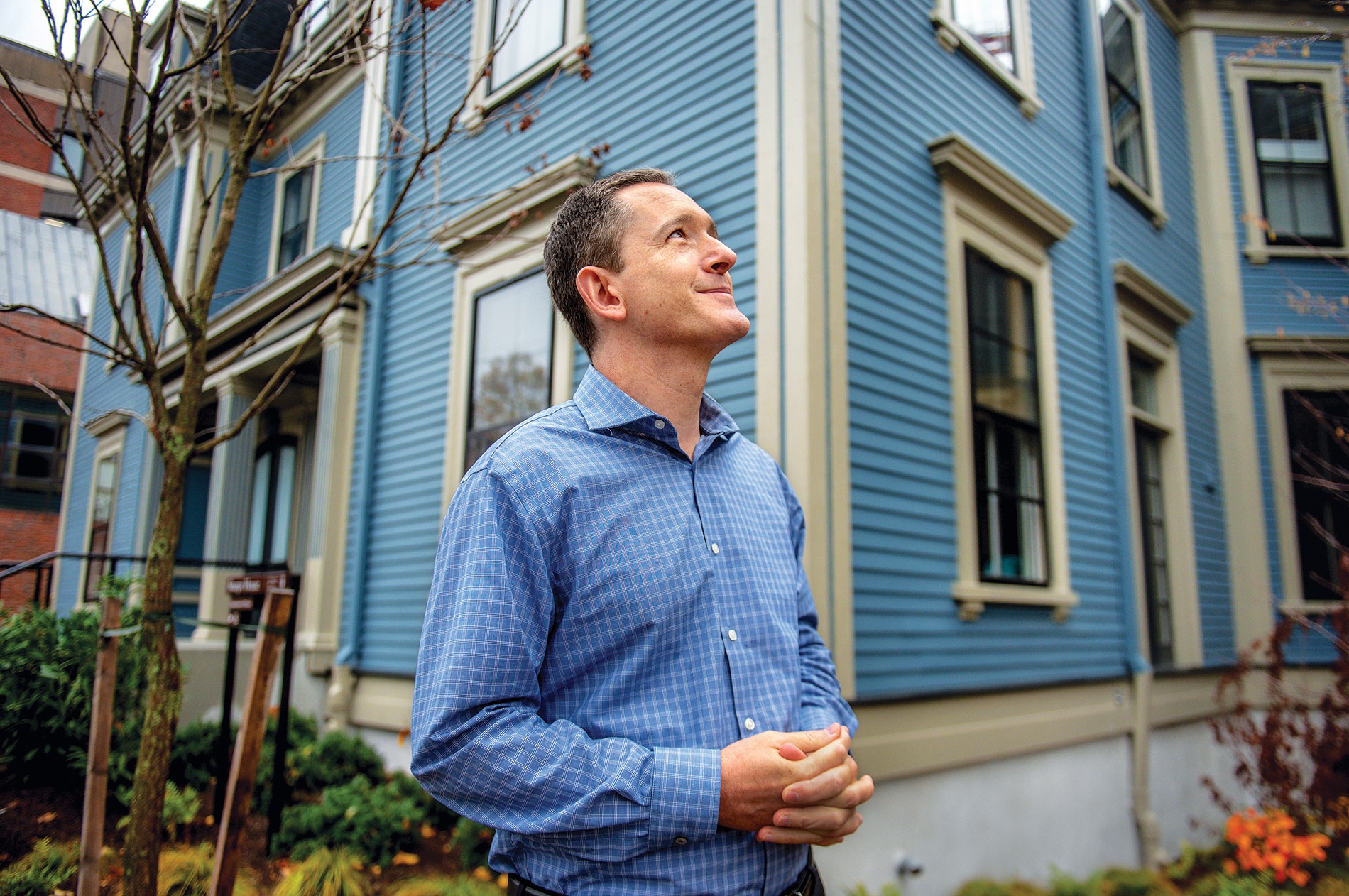 Capitalism on the Couch
A history course analyzes the social, political, and cultural underpinnings of our economic system.

On a hazy October morning in pre-COVID Providence, Professor Seth Rockman asks a lecture hall full of students what they thought of the documents they looked at for class—a collection of primary sources from the early 19th century that discuss welfare reform in the United States.

One student says he was struck by Thomas Skidmore’s 1829 treatise, The Rights of Man to Property, which advocates for a 100 percent inheritance tax and an equal share of property for all people—an equity of distribution that is echoed in the universal basic income idea promoted by former Democratic presidential candidate Andrew Yang ’96.

“This is a Madisonian nightmare,” another student blurts out. Rockman shares a laugh with the class.

“How did the elites get rich in the first place?” a student at the very back of the lecture hall asks, in earnest.

“The primary predictor of economic success then, as now, is your parents,” Rockman responds. “This is why Skidmore is so important.” He adds that in the early 1800s, owning property was crucial for obtaining credit, because credit was based on collateral.

Today’s lecture in History of Capitalism is about the birth of what contemporaries called the middle class. “The story of the rise of 19th-century capitalism is the story of a group that finds itself in the middle,” Rockman explains. “We get the ingredient list for capitalist culture when we see how the middle class talks about the poor.” The middle class defined itself in terms of the values—sobriety, honesty, industry, and thrift—that they claimed poor people lacked, and used this as an explanation for why some people were poor.

History of Capitalism
courses have emerged at universities including Brown, Harvard, and NYU in the past decade to provide an alternative study of capitalism t0 that undertaken in introductory economics courses. While Principles of Economics, the introductory economics course at Brown, teaches the key tenets of neoliberal economics—the “laws” of supply and demand, for example—the History of Capitalism undertakes a distinct disciplinary project: understanding how capitalism was constructed and experienced over time, including an interrogation into how knowledge systems such as the field of economics came into existence.

Students concentrating in environmental science and international relations can now take History of Capitalism in lieu of Principles of Economics, following a recent change in both departments’ curricula. Rockman was teaching this course for the sixth time, with nearly 90 students enrolled.

“We have a societal conception that capitalism is a natural phenomenon,” says sophomore Charlotte Balliett ’22, who took the course last fall. “I was taught about it as if it was a fact or a science. What do we learn when we think about it as having a history?” Balliett says she went into the class expecting to study economics and the expansion of the market. Instead she learned about the ways in which individuals experienced capitalism throughout time. “We are looking at these micro examples of how people started using accounting, or at different legal infrastructures that contributed to the capitalism that we know.” For Rockman, teaching these “microhistories”—individual narratives that contribute to a broader understanding—is crucial in understanding how capitalism actually operates.

Some students are invested in “dismantling structures of inequality” while others want to know how to become the next Steve Jobs.

The microhistory for today’s class is the story of a 19th-century merchant named Lewis Tappan. The merchant economy at the time, Rockman explains, was a national and international economy based on credit. Unlike previous eras, in which markets were local and based on individual interactions, merchants did not meet the people they were trading with. Instead, there was a “long chain of credit” that ran through New York City. Tappan wanted to take the risk out of this diffuse market system. “How do I know this dude I’m trading with in Cincinnati is reliable?” Rockman asks the class.

Tappan found influential people in the towns where merchants were operating. He used them to gather information about merchants—not financial information, Rockman emphasizes to the class—but “information about character.” Does the merchant go to church? Taverns? Whorehouses? Does his wife belong to a benevolent society? “It’s very subjective stuff,” Rockman says. “You’d better go to church and not drink to have a good credit score.”  His casual tone is not to be mistaken for flippancy. “Credit-score reporting is the eyes and ears
of commercial middle class culture.”

“I think one of the magical things about the word capitalism,” Rockman says, “is that for some segment of the Brown undergraduate population it’s immediately assumed to be a term of critique. And for other students, it’s associated with Alexander Hamilton and entrepreneurship.” As a result, Rockman says, the course has become one of the most “intellectually diverse classrooms in the curriculum.” Some students are invested in “dismantling structures of inequality” while others want to know how to become the next Steve Jobs.

Emma Golden ’23, who was a first-year student planning to study applied math and economics, attended Principles of Economics each Monday, Wednesday, and Friday morning last fall before History of Capitalism. “I figured [History of Capitalism] would be about business and money,” she explains. She hadn’t planned on taking  any history classes after graduating from high school, but a friend from her dorm convinced her to shop the course at the beginning of the semester. “We are trying to understand where people’s outlooks come from,” Golden says, “rather than saying, ‘that was good and that was bad.’” Golden didn’t find a contradiction between the two courses. Instead, she appreciated learning about the same topics from different approaches—for example, on a single day, she had lectures about intellectual property in both Principles of Economics and History of Capitalism.

Another student in the class, Ryan Frant ’23, says he has taken many economics courses but took History of Capitalism to “view similar issues from a different angle.” Like Balliett, he realized quickly that learning about the history of capitalism changed the way he thought about it. “Coming into the class I conceived of capitalism as a mechanistic process of buyers and sellers engaged in market transactions until equilibrium was reached,” Frant says. “I learned, however, how identity and power structures can often interfere with the clear-cut, theoretical description of capitalism.”

Reader Responses to Capitalism on the Couch

The course sounds interesting. I suggest to the professor that assigning students to do a study of successful private companies formed within the last 20-year window and getting an idea of the motivations and tactics of owners might elaborate the themes of the study with reality.

Thank you for your article on Professor Rockman’s course, “History of Capitalism,” and the deeper analysis of the origins of the economic thinking we often take for granted. It reminded me of one of the aspects of my experience as a Brown undergrad that I valued most; the ability to explore topics not always covered in the regular curriculum. For example, in an independent study with fellow students on socially responsible business, I first learned about cooperative enterprise as a democratic economic alternative rooted in community self-help. This led to a career in the Fair Trade and cooperative movements, teaching courses on co-ops, and my current role as executive director for a regional association of food co-ops and chair of the board of directors of the National Cooperative Business Association. While receiving limited attention in universities and business schools, the cooperative movement emerged alongside capitalism as an alternative to both state- and investor-owned enterprise and today plays a surprisingly important role in the global economy. About 1 billion people around the world, including 1 in 3 Americans, are members of a co-op or credit union, more than directly own stock in publicly-traded corporations. And as we work to address issues of global challenges of climate change, food security, and economic inequality, the United Nations has recognized cooperative enterprise for its key role in advancing the 2030 Sustainable Development Goals.

Very interesting article. Could never have been taught at Brown in the sixties. We would have just said “huh?”  I went on from Brown and spent my life as a serial entrepreneur. Enjoyed the heck out of all the stuff I did. This article has opened my thinking somewhat. Looking back on all the folks I worked with over the years in various businesses I can’t help thinking about the diversity of people I worked with and what made them tick? The fact that a course like this can be taught at Brown over 50 years later and is popular tells me that “the times they are a changing.” Glad to see how we are evolving as a society and the popularity of this course shows me that we are changing. Not sure where we are headed but happy to see change. Can’t wait to see where young people today take us.

The course sounds interesting (“Capitalism on the Couch,” Courses of Study, January-March ’21). I suggest to the professor that assigning students to do a study of successful private companies formed within the last 20 years and getting an idea of the motivations and tactics of owners might elaborate the themes of the study with reality.