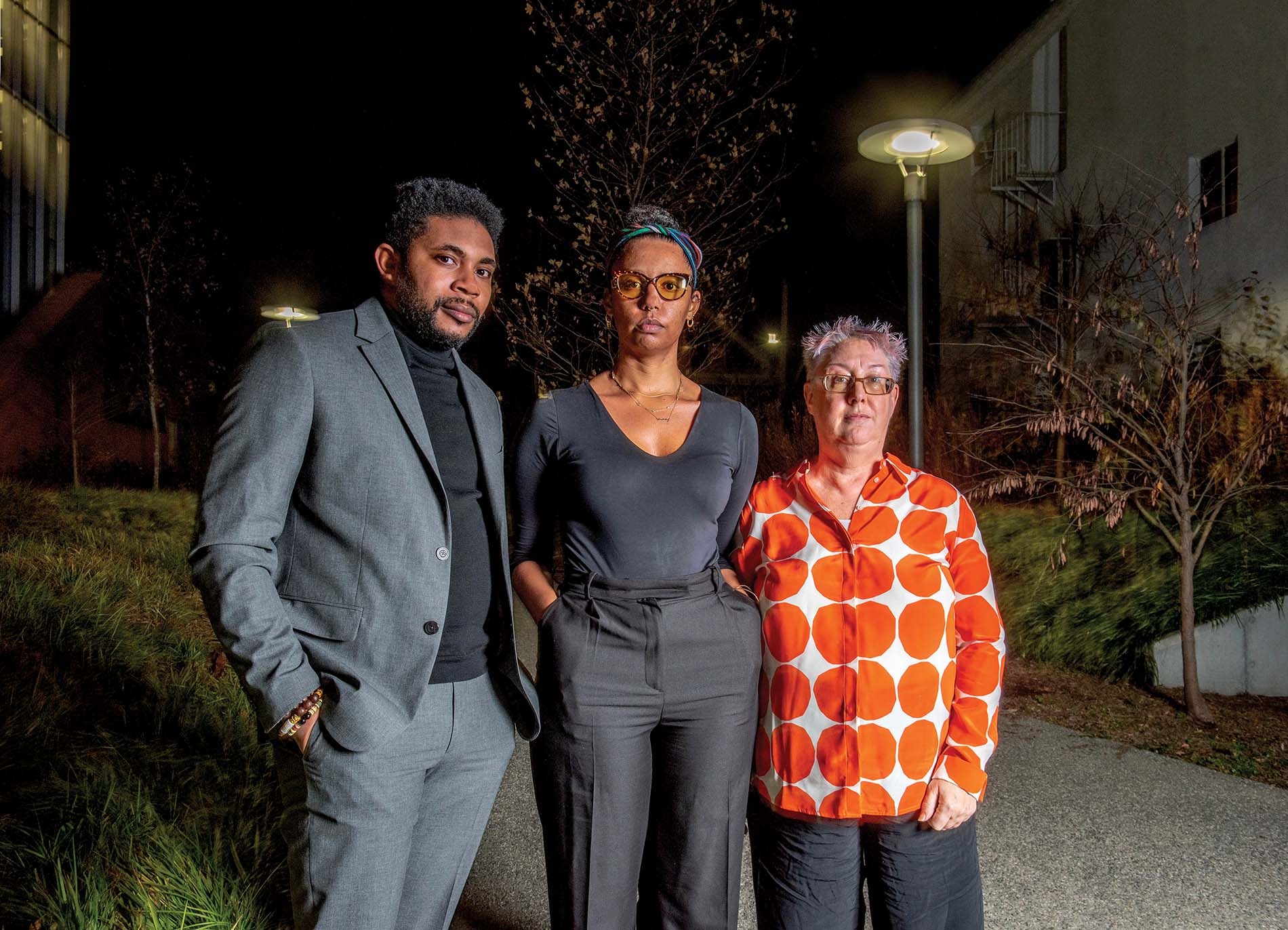 Opponents argue that it teaches white children to hate themselves. Advocates say it is the key to replacing the colorblind fairytale of American excellence currently taught in many schools with the vivid reality of our nation’s painful yet powerful history.

might be more pervasive—and more insidious—than people previously dared to admit aloud. It was discussed mostly in grad-school settings until 2020, when conservative activist Christopher Rufo argued that CRT was the nefarious force behind what he termed “segregationism, group-based guilt, and race essentialism”—against white people, being taught to white children.
As a guest on Tucker Carlson’s Fox News show on September 2 of that year, Rufo called CRT “an existential threat to the United States.”

A new battle in the culture wars was on, with the rapid passage of anti-CRT laws across several states in the months that followed. In October 2021, a Texas school administrator instructed teachers that according to new state law, they were required to present “multiple views” of the Holocaust. Other states have specifically banned use of the New York Times’s 1619 project, focused on the consequences of slavery on American history, in public schools. Three Brown academics explore the nation’s latest political football (one other, who has spoken out against CRT, declined to speak to the BAM for this story).

“In history, there is often this discourse that, by extending rights to Black Americans or other students of color, we are taking rights from white students,” says Assistant Professor of Education Mahasan Offutt-Chaney, whose research focuses on the historic intersection between education, race, and social policy. “You started to see this conservative pushback against desegregation in the 1970s. For example, the idea that integrating Black students into white schools was robbing white students of their opportunity to choose their neighborhood or choose their peers—that kind of controversy parallels this recent iteration that we need a more colorblind curriculum, and that by discussing race, we are pushing harm onto white students.”

To parents who argue that it’s too soon for their elementary-aged children to learn about racism, Offutt-Chaney counters that if there’s no age requirement for experiencing racism, there shouldn’t be a requirement for discussing it. “This idea that we shouldn’t teach a curriculum that captures how racism works is to say that only certain children are allowed some level of innocence, that there’s this white innocence that should protect and preserve only white children, when everyone else has to live and see this every single day. Children are capable of understanding any level of injustice, and educators don’t want to teach these things to espouse hatred, but to espouse a deeper level of engagement.”

“They have evacuated the ‘theory’ from Critical Race Theory and totally reversed the issues of race and what we’re being critical of… to make it seem like CRT is an absolutely solidified list of accusations that victimize white people.”

The role of TV pundits

Professor Lynne Joyrich ’84 AM, ’90 PhD, graduate studies director in the Department of Modern Culture and Media, offers a reality check for anyone who feels personally offended by the idea that racism is inherent to our sociopolitical systems: “The right-wing media interpretation of systemic racism is that it means blaming every single [white] individual, and that is in fact the opposite of what systemic means: looking at how systems operate—it’s not at all about individuals being racist.”

Joyrich, who watches a lot of Fox News, points out the careful techniques used to simplify and vilify this nuanced academic theory. “The strategy of the media is to make it individualized to pull you, the viewer, in,” Joyrich says. On-air personalities use persuasive techniques such as looking right at the camera and using the second person or “we” voice, she points out. “They do this sleight of hand to create a link between themselves and the viewer, and it produces this effect of people becoming very concerned and then arguing about [CRT] at their local city council and school board meetings. They have evacuated the ‘theory’ from Critical Race Theory and totally reversed the issues of race and what we’re being critical of… to make it seem like Critical Race Theory is an absolutely solidified list of accusations that victimize white people.”

For Joyrich, this is “a story not only about our culture’s inability to think coherently about questions of race,” but also about the power and impact of mass media. “By using these conventions that they know appeal to people,” she says, “they have created this terrifying image of something that’s a figment of the media, and what goes by the name ‘Critical Race Theory’ in academia is something totally different from that figment.”

One of the fundamental goals of a good education is to “raise our kids to tell the truth,” says Assistant Professor of  Eduction Jonathan Collins, who specializes in education policy and political behavior. And if honesty is important, he says, “that has to be also apparent in what we do with our school curriculum.”

Reflecting on one of the focal points of the CRT debate, Nikole Hannah Jones’s 1619 Project for the New York Times, Collins cites Jones’s story of Isaac Woodard, a Black man who received a battle star after four years in combat during World War II, but was still beaten blind by police on his way home. “He’s a part of this larger lineage of helping to build this country, yet when we look at how history is typically taught, we tend to focus only on a narrow few,” says Collins. “People want to further this narrative that democracy was this beautiful and picturesque development, but that’s not true. So honesty also helps us to understand how we can better perfect the union.”

Ultimately, Collins argues that an honest telling of American history also empowers students from every background to believe in—and work for—a more equitable future. For kids who don’t feel like the system is working for them, he says, “there’s a way we can look at the American story and say, ‘Well, actually, that’s the way this country has evolved and pressed forward.’ The Revolutionary War is the result of folks who felt like the British system wasn’t working for them. The civil rights movement was a function of people who felt, and were very adamant in showing the rest of the world, that the system wasn’t working for them.”

“As a student, you need to be able to see yourself in people who made really tough decisions to speak truth to power,” he says. How will the next generation know they can be the change they wish to see in the world “if we don’t have some kind of curriculum in place that allows kids to see that?”

“I always thought this conversation should not be about whether or not we seize this history,” Collins adds. “The question really should be, how do we go about doing so? How do we make sure that our kids can have generative and civil conversations about acknowledging the truth of the nation?”

I lived under segregation with hatred and bigotry in Tuskegee despite the fact that the largest economic force was a VA for Black patients barred from white hospitals. We were able to act for ourselves. We fought back. Gradually we had victories over racism. Dr. King’s lawyer, Fred Gray, who was also Rosa Parks’s lawyer, lived next door to me for 30 years. I got to know him well. They both would have rejected CRT. Dr. King urged us to be colorblind when it comes to judging and dealing with others. CRT is the opposite. Racism and bigotry never die. CRT mirrors those evils. Focusing on skin color reminds me of being kicked out of stores, theaters, and other places because I was the “wrong color.” King’s work was not in vain. Even the mayor of Montgomery is now Black. Much in our history is shameful and inhumane, but we are not frozen in time. No other largely white nation has twice chosen a black man as leader. CRT has many things right about slavery, bigotry, overt racism, and the like. But it’s wrong to racially stereotype blacks and whites in today’s world as CRT does.

I think all I learned from this article is what the interviewees say CRT isn’t. The title of the article is misleading. This follows the same thing we see on both sides of the media these days with both sides talking past each other. Perhaps a longer space is needed for a fuller explanation of what CRT is (and isn’t). I can’t wait to read it and learn.

I thought this was a very good article, which was accurate and which fairly criticized Fox News and Christopher Rufo. However, I thought it was not balanced and failed to identify valid criticisms of CRT. I thought it was a bit chilling and upsetting to read that a Brown prof “who had spoken out against CRT declined to speak to the BAM for this story.” CRT raises complex and nuanced issues which cannot be developed in a short comment but suffice it to say that I much prefer the traditional civil rights discourse to the CRT approach (especially relating to legal theories), although I think CRT raises many valid points. With respect to Professor Offutt-Chaney’s comments on teaching elementary school children to learn about racism, I wonder what he thinks about the teacher who tried to do some role playing exercises in which the black kids were supposed to be slaves and the white kids were the owners? The teacher got fired.

I had my first exposure last year to environmental justice. Discussions made me very uncomfortable, but I now realize that this should be expected when dealing with matters that are complicated and difficult. Racism is clearly one of those matters. I feel strongly that in order to effect improvement, one needs to actively seek and to know the truth, even though the truth may be difficult to accept. The intent of CRT is not to demean but to elevate.

The article in BAM about the CRT debate was interesting. I encourage those interviewed to assemble pro- and anti-CRT people to have a discussion, not a debate. If moderated well, they may find they have a lot more in common about teaching history than they thought. And from that will come collaboration and progress and improved understanding.