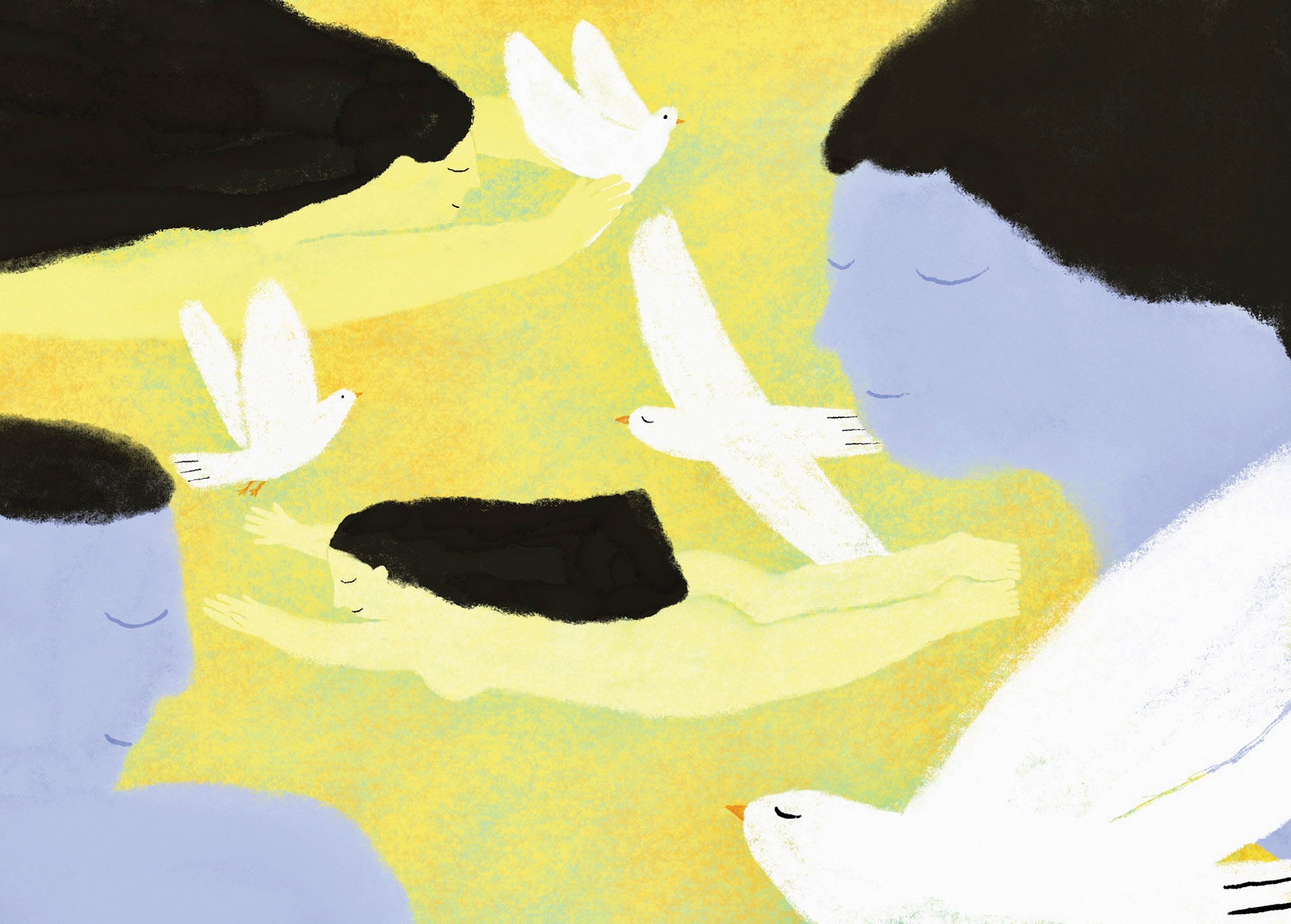 Lessons from the Arab Spring
The uprisings that overtook the Arab world 10 years ago sparked a wealth of new scholarship.

In 2011, civil unrest swept across much of the Arab world after the self-immolation of Mohamed Bouazizi, a Tunisian street vendor frustrated by government corruption and police brutality. Protests escalated into transnational revolutions, known as the Arab Spring, in countries including Egypt, Syria, and Libya. These movements resulted in a mixture of regime changes, reforms, and harsh crackdowns. Brown faculty and alumni who were eyewitnesses to the protests have since analyzed the political and social impacts of the unrest and what it has meant to their scholarship and to the Middle East 10 years later.

Emily Drumsta ’06 was studying Arabic in Cairo when protests broke out. Initially, she felt ambivalent as an American, and recalls thinking, “This isn’t my fight.” Her perspective shifted as international news outlets dubbed the Tahrir Square protests the “Facebook Revolution” or “Twitter Uprising.” Drumsta, now a professor of comparative literature at Brown, saw the movement in light of Egypt’s history of grassroots protest, rather than as a social-media phenomenon. She partnered with two other graduate students to “complicate the narrative that it was Mark Zuckerberg’s company that made this happen,” she says. “The experience of being at the Square wasn’t one of being on your phone.”

With the help of nearly 100 translators, Drumsta’s team made hundreds of Arabic documents available in English over the course of a year. The online Tahrir Documents Project raised up “paper voices”—protestors’ poems, political manifestos, and pamphlets, gathered during protests each weekend—to show the reality of the Square to thousands of online followers who did not necessarily speak Arabic.

Since a 2013 coup, Egypt has been controlled by autocratic President Abdel Fattah el-Sisi. Although less active in Egyptian politics, Drumsta continues writing about the project, contributing a chapter to the 2019 Routledge Handbook of Arabic Translation. She believes the current situation is a “pressure cooker,” she says. “The more pressure you put on people, the more likely things are to burst.”

In August 2011, Adam Levine traveled by boat from Malta to Misrata, Libya, where he ran an NGO field hospital between rebel-controlled Misrata and Tripoli, which was ruled by the forces of Colonel Muammar Gaddafi. Levine was surprised by his patients’ emergencies: “In a trauma field hospital in the midst of a civil war, you might think that gunshot wounds are going to be the primary thing,” he says. “But it was only a tiny slice of what we saw.”

Levine, a physician who is director of the global emergency medicine division at the Warren Alpert Medical School, notes that Libya’s prewar medical system had been robust, but as pharmacies and hospitals shuttered, Levine’s team treated high blood pressure and diabetes along with blast injuries. They also conducted a “rapid needs assessment” of medical facilities once rebels captured Tripoli. The WHO published their findings, which cited a dire shortage of nurses and orthopedic surgeons.

Levine, also the director of the Center for Human Rights and Humanitarian Studies at the Watson Institute, says the Arab Spring represented a turning point in his field. Aid groups had been “working by anecdote” mainly based on experience in Sub-Saharan Africa, where malaria and measles outbreaks had taken priority—so they sent malaria meds to Libya, where there’s no malaria. Levine found NGOs needed to better adapt their work to the climate and health conditions of each country they serve—that the successful targeting of aid requires “collecting data in the field.”

Among the causes of the Arab Spring, youth discontent, political repression, economic hardship and globalization rank high. And, according to Jonathan Guyer ’08, “Satire had played this huge role in the revolutions.”

Guyer caught the “Cairo bug” while studying abroad in 2007. Now managing editor of The American Prospect, a political and public-policy magazine, he drew cartoons for the Brown Daily Herald as an undergraduate. In 2012, he received a Fulbright grant to research Egyptian political comics. The Arab Spring had fostered a boom in the art form: “There were launch parties and art galleries selling comics,” Guyer

recalls. “I discovered this was happening also in Beirut and across North
Africa.”

Although comics have long played a “significant politicized role” in Egypt, Guyer says, they had undergone little academic study. He describes his subsequent work—including book chapters, New Yorker articles, and exhibitions with a Radcliffe Fellowship at Harvard—as a “dialogue” with artists on their roles in political movements.

Many artists fled the country during President Sisi’s rule. “It’s not that these people have lost their connections with Egypt,” Guyer says. “They’re still drawing for newspapers in the country. They don’t feel comfortable living there while they do it.” Despite censorship and the threat of imprisonment, they still push back against Sisi’s authoritarianism. “Satirists are very intuitively aware of what’s allowed and what isn’t allowed,” Guyer says. Artists now rely on “subtlety and backhanded jokes, finding ways to make fun of the regime that don’t put themselves at risk.”

For Nadje Al-Ali, anthropology professor and director of the Center for Middle East Studies, the term “Arab Spring” is a bit of a misnomer. Significant earlier democratization movements, like the 2009 Iranian Green Movement, played a role, and protests were not only attended by Arabs. “Whether it’s Nubians in Egypt or Berbers in Morocco,” she says, “there are ethnic minorities everywhere.”

Al-Ali, who has written about gender and feminist movements across the Middle East—including in Egypt, Jordan, Iraq, Turkey, and Lebanon—saw gendered issues during the 2011 protests, where many activists she knew said they were attending “not as women, but as Egyptians.” She recalls her skepticism: “Women are always asked to wait their turn, and their turn never comes.” While Tahrir Square was touted as a secure space for women, gender-based violence led female activists to “fight for their space” in the larger movement against authoritarian rule. Al-Ali is optimistic about “increasing solidarity” between men and women, especially in recent protests in Iran and Lebanon.

Her next book, Gender and Sexuality in the Middle East, written with Nicola Pratt from the University of Warwick, will tackle the diversity of Middle Eastern feminism. Al-Ali sees connections among movements around the globe. “At this specific historical and political juncture,” she says, “the old categorizations of how we divided the world into the democratic West and the dictatorial Middle East just don’t hold true anymore at all.” Right-wing authoritarianism has risen in the Middle East, and also in Hungary and the U.S., but it has been equally met, Al-Ali says, with “progressive people trying to fight for equality, for justice against racism, sexism, and homophobia.”

Reader Responses to Lessons from the Arab Spring