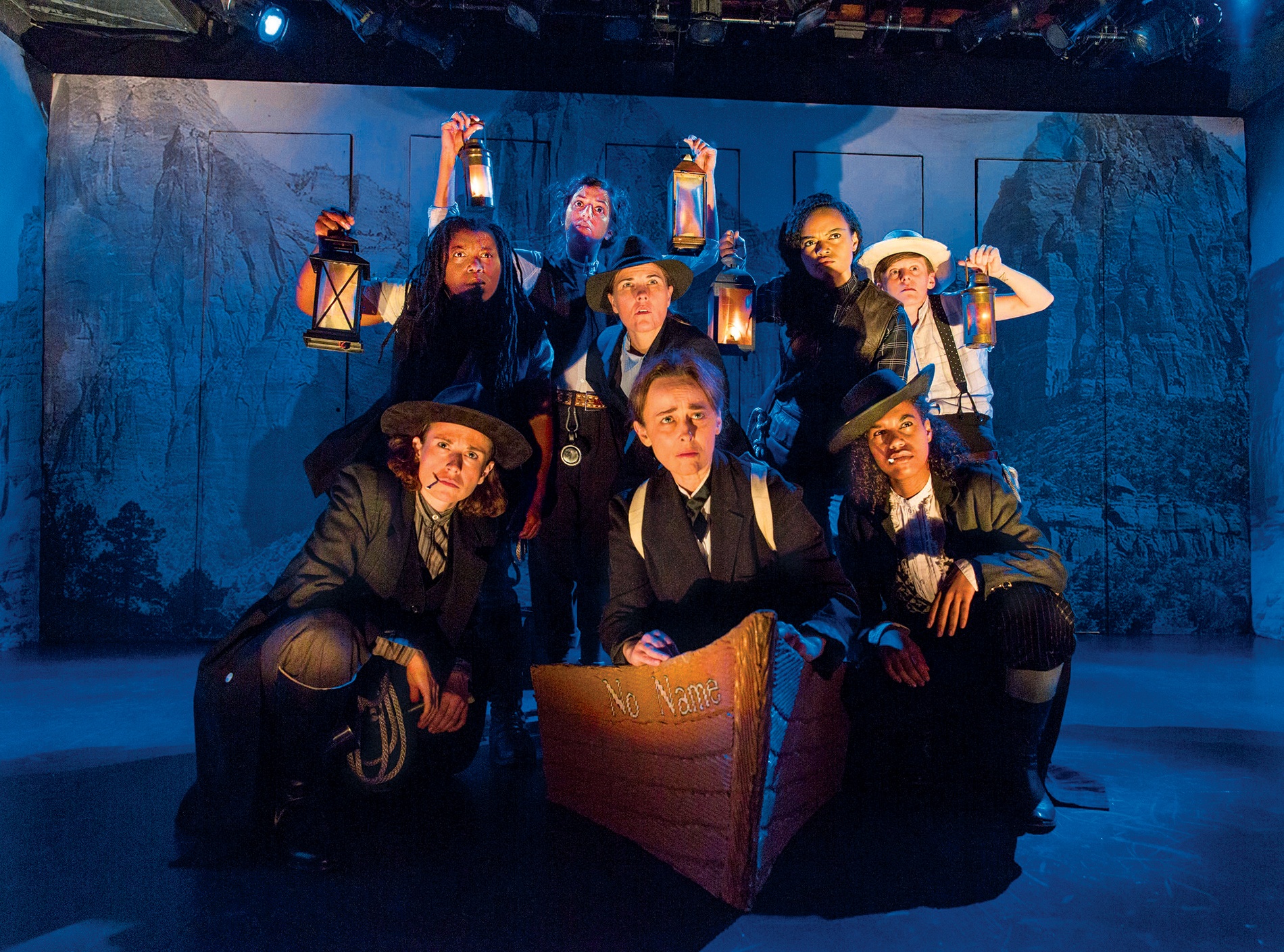 An all-female cast played all-male characters exploring the West in 1869 in Men on Boats by Jaclyn Backhaus.Photo: Richard Termine
The Arts

Early this year, the multiple Obie–winning New York City theater company Clubbed Thumb, cofounded by Maria Striar ’91 and Meg MacCary ’91, was heading into its 25th summer season with a trio of original plays, one of which was to be directed by Tara Ahmadinejad ’07. There would also be readings of plays by its early-career writers group, including Julia Izumi ’19 MFA. It was shaping up to be a banner silver anniversary for a company that has long garnered critical praise for mounting, in the company’s own boilerplate, “funny, strange, and provocative” works; “unusual stories unusually told.”

Then came COVID-19. With arts organizations throughout the city frozen in place—and some of them shuttering for good—the 25th season has been delayed for this company that has not only become an incubator for top theater talent—including a string of Brown grads like Sarah Ruhl ’97, ’01  MFA, Gina Gionfriddo ’97 MFA, and Jordan Harrison ’03 MFA—but that, last year, saw Heidi Schreck’s What The Constitution Means to Me become its first play to go to Broadway.

“We’re pretty sure we’re postponed until next spring,” says Striar, who now helms the company alone. “If we can gather groups in small spaces by then. It’s hard to know.”

With no physical theater of its own, Clubbed Thumb (named for a photo in a book of Victorian palmistry) has remained intimate in scale, but it’s hard to overstate the influence it has had on a generation of theater artists—and on playwriting itself, having shaped dozens of works, very often women-driven, that aren’t exactly commercial parlor dramas but aren’t too far-out either. A Clubbed Thumb play exists in a beguiling netherworld where the everyday meets the bizarre, eerie, or quirkily charming.

“A playwright told me last year that Clubbed Thumb was where theater was going but just didn’t know it yet,” says Striar, who often held readings and rehearsals in her East Village apartment, passing around homemade baked goods as her pit-shepherd mix, Otto, curled up amid the actors. “I loved that remark, so I’m repeating it now in hopes of making it a thing.”

Striar also hopes that Clubbed Thumb survives COVID. “Right now, we can’t do our main activity, which is to produce new plays. Our communities are all out of work. We have no real box office and we can’t throw real galas. It’s early yet, but it feels pretty sure all our funding sources will be strained by the devastation to the economy. We were poised for our biggest year ever, with three shows outside of Summerworks,” the company’s usual troika of warm-weather fare. “We were growing.”

Despite the uncertainty of the moment, she remains optimistic. “I’m really hoping that as a small, flexible company that’s not used to having much but has been a springboard for talent and innovation, we’ll be able to adapt and come back swinging—and be part of making the theater of tomorrow.”

Reader Responses to Rules of Thumb